How and why did mammals go back to the oceans?

If I understand evolutionary biology correctly, mammals first evolved on land as small, rodent-like creatures, in a time when reptiles were dominant on land. Eventually, they diversified into the species we know today. Some of these species, however, are aquatic - whales and dolphins readily spring to mind. Why did the ancestors of whales and dolphins leave the land to go to the oceans? How did they evolve from their original form to their superficially ichthyoid appearance today?

I'll focus on whales and dolphins (cetaceans) as you mention them by name and they are representative for other marine mammals such as seals or manatees. The evolution of cetaceans was one of the fascinating evolutionary mysteries. Clearly, they were mammals, but which mammals were their closest relatives? Clues to solve this mystery began to appear in the 1980s and 1990s.

During the 1980s and into the 1990s, paleontologists discovered several fossils that were clearly land-based mammals but shared many skeletal features with cetaceans. These fossils, including Pakicetus [(Gingerich et al. 1983)] and Rodhocetus (Gingerich et al. 1994), shared skeletal features that are unique to whales and to the Artiodactyla, commonly known as the even-toed mammals. Artiodactyls includes deer, sheep, pigs, bison, and hippopotamuses. Artiodactyls and the fossil whales share a unique skeletal feature of the ankle called an astrogalus, shown in the picture below. The astragalus is a "double pulley" structure that contributes to the ankle joint. This picture is taken from an excellent summary of whale evolution, provided by the Understanding Evolution site hosted by University of California at Berkeley. The astragalus is not present in other mammals. 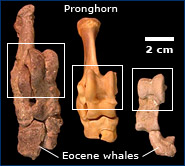 The fossil whales and modern cetaceans also share unique features of the skull around the area of the ear, called a tympanic bulla. Although all mammals have bullae (plural of bulla), the bullae of cetaceans and the whale fossils is unique compared to other mammals. For more on the bulla, see this Talk Origins page. More on fossil whales can be found at the Berkeley Comparative Museum of Paleontology. The many fossils that have been found are transitional forms that link artiodactyls and modern cetaceans. 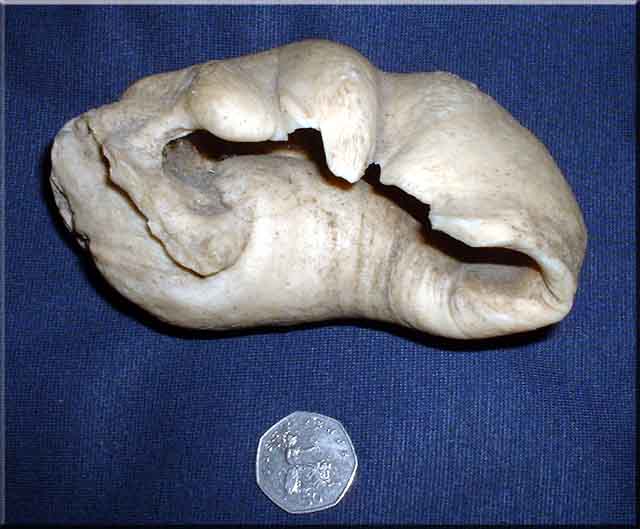 Around the same time as the fossil discoveries, genetic analysis added additional evidence supporting a relationship between the artiodactyls and cetaceans (Milinkovitch et al. 1993). Although early genetic analytical techniques were not as robust as they are today, many genetic studies have since supported and refined the conclusions of Milinkovitch et al. Current evidence shows that the closest living relative of cetaceans are the hippos (see, for example Price et al. 2005 and Agnarsson and May-Collado 2008). The relationships are shown below in this figure from the Agnarsson and May-Collado paper. The dark lines are the artiodactyls and cetaceans, formally called the Cetartiodactyla. 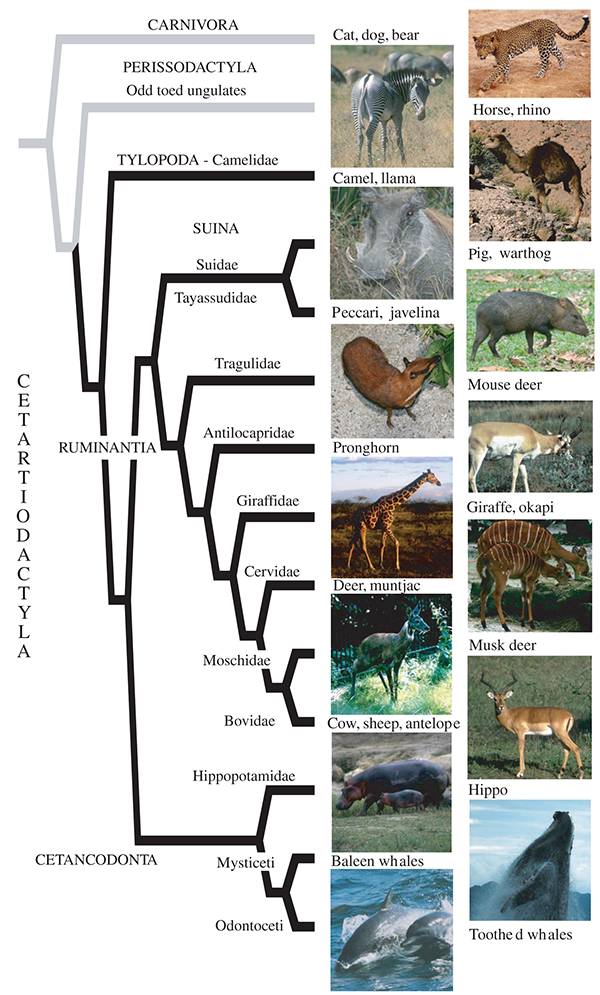 The question remains: why? The most likely explanation is that cetaceans evolved to exploit an unfilled ecological niche or adapted to new niches that formed as a result of plate tectonics or other types of environmental changes that occurred 50-55 million years ago. The niche describes all of the living and non-living resources needed by an organism to survive. Although land-based mammals were increasing in diversity, few or none were present in the oceans. The basic hypothesis is that the early whale-like artiodactyls, like Indohyus and Pakicetus were land-based (terrestrial) mammals that spent most of their time near the water's edge. Over time, they adapted to the niches in the ocean. Fossils like Ambulcetus and Rodhocetus showed clear evidence of swimming ability, with flattened tails and the enlarged rear feet. In addition, the nostrils shifted from the front of the face to the top of the head, which we recognize as the blowhole.

The shift to the aquatic habitat allowed these species to exploit resources that were not available to land-based mammals, thereby reducing competition for the resources. Reduced competition allows more individuals to survive and reproduce.

Similar scenarios are very likely for other marine mammals, such as seals or manatees. They evolved to take advantage of ecological niches that were not filled by other organisms. This basic concept, evolving to fill available niches, is a common outcome of the evolutionary process.

The of adaptation of cetaceans and other mammals to the oceans may be similar to that of the hippopotamus. Hippos spend most of their time in the water, and they show many adaptations that allow them to live in the aquatic environment. The eyes and nostrils of the hippo are high on the head, which allows them to remain almost entirely submerged but still see and smell, as shown below. 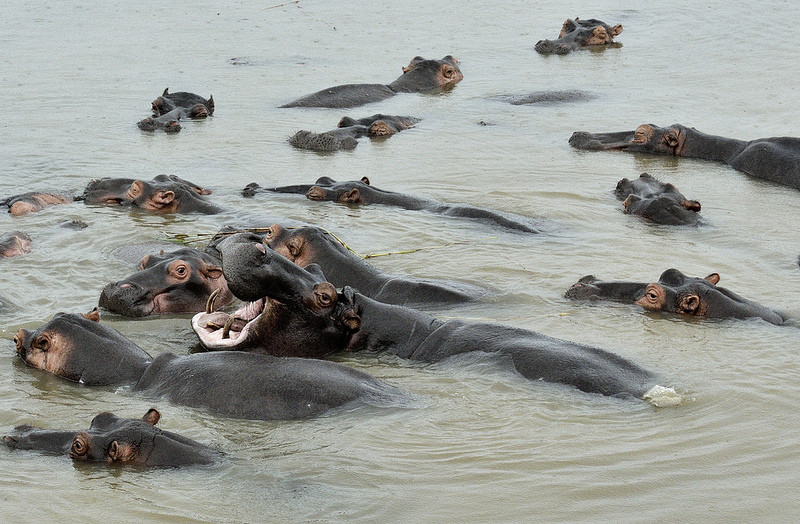 Hippos feed underwaters, they are heavy enough to walk on the bottom of the river, and the mate and give birth underwater. The young can suckle underwater. Clearly, hippos seem to be another mammal that is "returning to water." Similar types of processes must have occurred in cetaceans for them to adapt to the marine habitat.

Agnarsson, I. and L.J. May-Collado. 2008. The phylogeny of Cetartiodactyla: The importance of dense taxon sampling, missing data, and the remarkable promise of cytochrome b to provide reliable species-level phylogenies. Molecular Phylogenetics and Evolution 48: 964-985.

How did they evolve from their original form to their superficially ichthyoid appearance today?

This is an example of convergent evolution. Fish appear as they do (streamlined body shape, wide tail, fins, etc.) since these are adaptations to the underwater environment they're living and evolving in. These features are only "ichthyoid" or "fishy" because the fish 'got there first'. Instead, we can think of such features as "ocean-favourable".

Reptiles evolved on land, and hence have a generally different appearance from fish, but those which went back into the oceans to become the ichthyosaurs adapted again to live in that environment. Since they faced similar problems as fish (drag from the water, the need to maneuver in 3D, etc.), natural selection would favour the same "ocean-favourable" features as the fish (but not exclusively; for example, turtles have a rather different appearance, which is "ocean-favourable" but not as "fishy").

When mammals ventured into the oceans, they also faced these same problems and the same selection pressures, so they also gained a more "ocean-favourable" appearance.

Not the answer you're looking for? Browse other questions tagged evolution mammals marine-biology or ask your own question.

10
How did dolphins acquire their dorsal fin?

7
Why are recombination rates increasing in mammals?
8
How do marine mammals control buoyancy?
5
Why are oceans carbon sinks?
3
How do marine mammals and penguins maintain bone density?
2
Why do sea mammals die on land, and drown on sea?
3
How did shellfish and coral survive acidic oceans in earlier eras?
11
Why are there not two trees of life?