Do couples having children later in life act as an evolutionary mechanism?

Ok, this may be just wild nonsense and I have to warn that my knowledge on the subject is limited.

I was reading about how in some countries people choose to have children later in life. After that this question came to my mind?

If human couples chose to have children later in life, lets say 40s 50s - disregarding keeping an younger self gamete preserved - wouldn't this result in the people less resistant to the effect of aging being unable to reproduce, creating a more longevous generation? thus enabling future generations to reproduce even later lenghtening the average lifespan of humans?

ps: After reading this sounded a little too eugenic, by no means I'm trying to make this an legitimate theory or suggest an experiment, it's just a doubt - maybe good for some science fiction story...

Many factors have to be considered. First, although more women are delaying pregnancy until after the age of 35, the overall percentage of women doing so remains very small, as shown by this figure from this New York Times article. Only about 9% of pregnancies in the United States (for 2008) were in women over the age of 35. Most pregnancies still occur in younger women. I suspect this is especially true when considered globally. 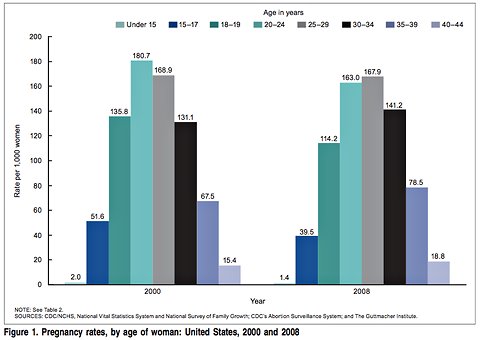 For natural selection to favor a particular trait (such as later pregnancy), the individuals with the trait must have higher relative fitness, meaning they produce more offspring on average compared to other individuals. However, relatively few women have late-age pregnancies, more of the offspring are likely to have birth defects, and those offspring are themselves less likely to reproduce. In other words, on average, late-age pregnancies would have reduced fitness compared to individuals that get pregnant at earlier ages.

Most importantly, though, the decision to wait until later in life is a conscious choice, not a genetic trait. Natural selection can only work on genetic variation associated with particular traits. If the choice for delayed pregnancy has no genetic basis, then it is invisible to natural selection, and so cannot evolve.

Skjaerven, R. et al. 1999. A population-based study of survival and childbearing among female subjects with birth defects and the risk of recurrence in their children. The New England Journal of Medicine 340: 1057-1062.

You will appreciate reading this post and have a look to the wikipedia article on the evolution of aging. I make below a quick summary and apply it to your question but I think it is worth looking at the other post on aging.

In short: Theory of aging

Imagine a deleterious (=negative) allele (=variant of a gene) that is expressed throughout the lifetime. This allele (by definition of a deleterious allele) will decrease the reproductive success of the carrier. Now consider another allele who is expressed only late in life, maybe after the first reproduction but before the second reproduction. This allele will decrease the reproductive success of the carrier but by a lower magnitude that did the allele that was acting throughout the lifetime so that it is more likely for this second allele to rise in frequency in the population to the point of becoming fixed (=reaching a frequency of 100%). In other words, natural selection is less strong on alleles acting late in life. i.e. deleterious alleles acting late in life are more likely to get fixed resulting in the expression of many disease late in life. In the worst case, we can talk about alleles that are expressed after the time of the last reproduction. These alleles are not at all selected against (I make abstraction of kin selection here). Therefore, we should not be able to live long after the age of reproduction. non-reproductive grandmothers is kind of an exception and is explained by kin selection but I don't want to go into these details. Also, today's medicine explain why we live so long even after the last reproduction. For example articulation related disease that we experience at older age is often caused by this kind of alleles that are expressed only late in life. You can also consider alleles that are beneficial early in life but detrimental at the end of the life. THeir probability of fixation is even greater and these alleles have already been observed in nature. For more info about the evolution of aging, have a look to this post.

What happen if human decide to delay their reproduction age

So, what happen if suddenly all humans decide to reproduce later. Well, this will increase the selection against alleles that are expressed late in life and in the long run this will increase human lifespan (or at least it will increase the time during which humans are healthy). So yes, your hypothesis is right. However, as a sidenote, medicine may mess things up in the story!

Is it plausible that humans will start delaying their reproduction age?

For consideration of whether it is likely that the human population decide to delay their reproduction age, see @MikeTaylor's answer.

Not the answer you're looking for? Browse other questions tagged evolution senescence or ask your own question.

65
Why does evolution not make our life longer?