What do you call a virus when it's cured?

When a cure has been found for a virus, can it be called such anymore?

Virus implies it's something you've contracted that you just have to live with until (hopefully) your body can overwhelm and destroy it.

But say someone found a cure for the Common Cold tomorrow, would we still call it the cold virus or would it just be known as the "cold infection" or something to that effect?

Is "Virus" just a nomenclature we've adopted for a bug that has no cure, or is it used to describe a certain type of organism?

Lets start with the definition of a virus (from the Wikipedia page on viruses):

A virus is a small infectious agent that replicates only inside the living cells of other organisms. Viruses can infect all types of life forms, from animals and plants to bacteria and archaea.

So basically speaking you have a piece of genetic information (DNA or RNA) which encodes proteins which are important for the function of the virus and a hull (not always, but mostly). These invade a cell type, take over the cell (litarally, after an infection the cell will mostly only make viral proteins and DNA/RNA). Finally new viruses are built inside the cell and released to infect more cells. In principle this works like in the figure below (from here): 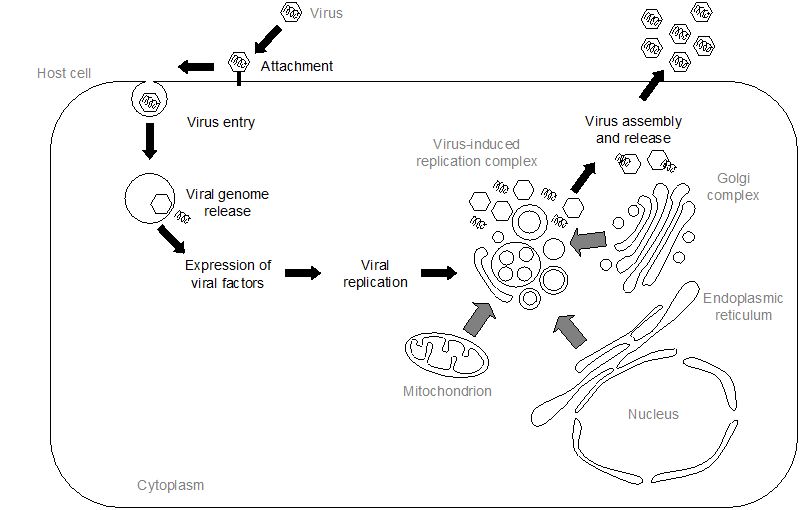 There are two possibilities for cures: The first one are vaccinations. Here you either use dead or attenuated viruses (or parts of viruses) to train the immune system. When this has happened, the immune system "knows" this specific agent and can rise a fast and highly specific immune answer against it, before the virus can replicate in high numbers and infect a lot of cells. This happened for example for the small pox virus which could be eradicated from the human population.

The other would be drugs which either target a virus (or some of it functions) specifically or prevent them from spreading. The immune system usually does the final cleanup here.

Both methods only work for people which either take the drug or are vaccinated, so they have no influence on the virus in people which are not protected. For further information have a look on the Wikipedia page on Viruses.

Not the answer you're looking for? Browse other questions tagged microbiology virus or ask your own question.

1
When can a virus modify DNA in every cell of a living organism?
4
For people who work in microbiology labs, what software do you use to manage your strains?
6
Healing rate of cut while suffering from a cold
4
Theoretically, what technique would one use to modify a virus so that it only affected a subset of the population?
11
Is there a period after you have had a cold when you cannot get a cold again?
3
What virus transforms full grown plants?
1
If a person is infected with an RNA virus what percentage of the RNA in the blood of the person contains RNA of the virus?