How well understood are the long-term effects of nuclear radiation?

How well understood are the long-term effects of nuclear radiation, for example on cancer? (As opposed to short-term effects such as acute radiation sickness, which is easy to quantify)

The three major nuclear incidents I can think of are the Japanese atomic bomb attacks, the Chernobyl disaster, and Fukushima disaster. Of course other nuclear incidents have occurred, but usually give much higher doses to far fewer people.

Many studies have been done on the survivors from the atomic bomb attacks, and increased rates of cancer have been the strongest conclusion. This review article looks at those studies for both cancer and non-cancer effects. Leukemia is the most well known cancer to be caused by radiation, and excess leukemia was discovered in bomb survivors within 5 years of the attacks. Rates of most solid tumors had increased by 10 years after the attacks. However "Even 55 years after the bombings over 40% of the Life Span Study cohort remain alive", indicating that the amount of radiation most people were exposed to wasn't enough to kill them. Here is another article on atomic bomb survivors.

The Chernobyl accident was a very different type of exposure, but many people were exposed to radioactive materials. Immediately after the disaster, the "liquidators" received high doses of radiation while cleaning up the site and building the containment structures, but very few have died from radiation exposure. While the environment around the power plant did suffer in the years after the accident, after the humans moved away the environment has greatly improved. Thyroid cancer rates increased due to Iodine-131 exposure, especially among those exposed as children, but rates were still low. 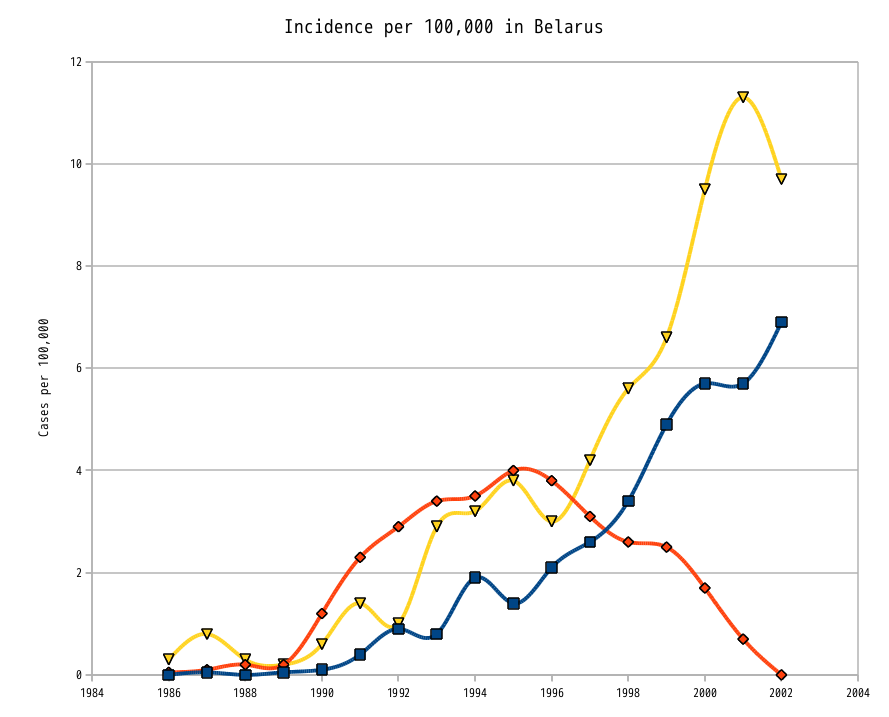 It is too soon to draw many conclusions about the Fukushima accident, but some studies (7, 8) have tried to predict the number of cancer cases that will be caused by it. In general the rates are expected to be low, with far fewer deaths than were caused by the earthquake and tsunami that caused the accident.

A few instances exposed small numbers of people to very high doses, and are interesting from a radiation safety veiwpoint. The infamous "Demon Core" killed 2 scientists in separate accidents while handling the core. The Goiania incident involved men breaking into an old hospital and stealing a radiation source without realizing what it was. They broke the source open and passed the radioactive material around because it looked cool, resulting in several deaths due to acute radiation sickness.

While radiation can be dangerous, with proper precautions we can avoid accidents and disasters. Remember that Chernobyl was a poorly designed Soviet reactor, and that Fukushima was a 50 year old plant that needed both a magnitude 9 earthquake and a 30 foot wave to disable it. Modern nuclear plants can be built safely and provide clean electricity for many decades, and if they are breeder reactors can recycle the used fuel to reduce both the amount and half-life of the material, making storage easier.

Not the answer you're looking for? Browse other questions tagged radiation or ask your own question.

45
How do cockroaches resist the effects of ionizing radiation?
3
Could there be any effects from low powered infrared being used to track eye movements long term?
1
How do I find samples/patients in TCGA (the cancer genome atlas) that had radiation therapy?