Stardust or the elements in our bodies

How do we know we are made of stardust? As our cells divide, are our atoms repurposed from existing materials or spontaneously generated? Do we consume materials after we are born that contain elements that were in stars? This I would understand. Or, as our cells are initially dividing after conception, but before birth, are we already repurposing existing materials to grow?

The saying that you are referring to is from Carl Sagan, when he stated that:

"We are a way for the universe to know itself. Some part of our being knows this is where we came from. We long to return. And we can, because the cosmos is also within us. We're made of star stuff,"

In answer to your question, yes, we are 'repurposing' the elements that make us up, as are all living and non-living matter.

Chris Impey, professor of astronomy at the University of Arizona is quoted in the article Are We Really All Made of Stars? (Melina, 2010) as stating:

the fact that the carbon, nitrogen and oxygen atoms in our bodies, as well as atoms of all other heavy elements, were created in previous generations of stars over 4.5 billion years ago. Because humans and every other animal as well as most of the matter on Earth contain these elements, we are literally made of star stuff

The elements that make up the cells etc in humans and any life forms, as with the materials that make up the Earth itself were ultimately formed by nucleosynthesis processes (mostly fusion and neutron capture) in stars, explained in the webpage Origin of the Chemical Elements as being:

the early Universe consisted almost entirely of the element hydrogen, with a small amount of helium present too. Hydrogen, therefore, is thought to be the starting material from which all other elements have been built. This is consistent with the very high abundance of hydrogen in the solar abundance profile. The process may be thought of as a series of fusion reactions which weld together simple atomic nuclei to build increasing complex atomic nuclei.

Unless you are inside a star or a fusion reactor- Matter is neither created nor destroyed. However, fission of unstable isotopes is fairly common on earth's surface. You may accumulate one of such isotopes but usually the ones that are generally absorbed in our bodies such as C-14 have very long decay times (more than your lifetime). So for all practical purposes you are created from the atoms of existing matter and these keep getting recycled from the environment.

Now the composition of different stars is different and statement like "Do we consume materials after we are born that contain elements that were in stars", is too farfetched. Many millions of years have passed since earth came out of a star and lot of nuclear reactions have happened in this time. So the composition is of course different.

It might be helpful to think about where elements in general come from. Here is a plot of relative elemental abundance.

Note that the Y axis is logarithmic, so H and He are much much much more common than anything else. You'll notice that Li, Be, and B are rare, and C, N, and O are fairly common, and are the main components in biological chemistry. Fe is relatively abundant, and after Fe elemental abundance falls off. The explanation for the abundances comes from the processes involved in nucleosynthesis.

Big bang nucleosynthesis was the generation of hydrogen and helium within the first 3 minutes of the universe as the quark-gluon plasma cooled and formed the protons and neutrons. As the universe expanded and cooled, it lost the energy needed to keep making atoms within 20 minutes, so only very small amounts of Li, Be, and B could be made.

Stellar nucleosynthesis is the creation of "heavy" elements by nuclear fusion in stars. This is how we get C through Fe. As the stars age and use up their fuel, they generate elements up to Fe because energy can be released from fusion of atoms up to iron, past iron fusion takes more energy than can be released.

Elements heavier than Fe must be created through supernova explosions. This is the only natural way to get enough energy to jam the nuclei together. This only works well for elements up to uranium, where nuclei become unstable and decay at relatively fast rates. These unstable elements are produced in nuclear reactors and particle accelerators. Note that supernova explosions don't just make heavier elements, they are also responsible for blasting the elements made in stars into space where they can form new stars and planets. This is where the matter that makes us comes from, hence the stardust.

Another method for generating light atoms is cosmic spallation, where a cosmic ray hits an atom and blows some protons and neutrons out of the nucleus. This material becomes light atoms, such as Li, Be, and B.

Here is a periodic table that shows where each element comes from. 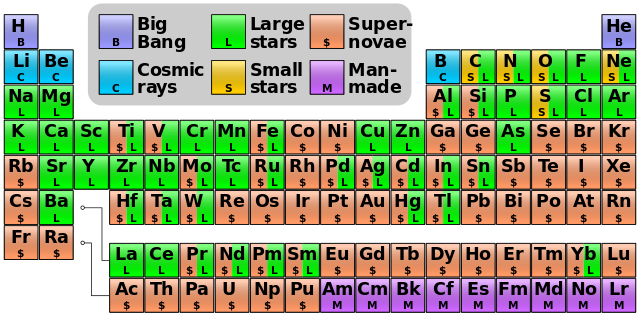 Not the answer you're looking for? Browse other questions tagged cell-biology or ask your own question.

3
How many centrioles/basal bodies are there in multi-ciliated cells throughout the cell cycle?
2
What is the role of lamellar bodies in lung cells?
3
What happens to the excess immune cells or WBC in our body?
2
Hayflick limit and hair or nails
6
Why are there no Nissl bodies in the axon?
0
Enhancer elements in prokaryotic DNA?
1
Significance of Nissl bodies