What's the difference between growing cells in culture and cloning them?

The wikipedia page on Hela cells refers to George Gey being able "to isolate one specific cell, multiply it, and start a cell line." Later it says, "In 1955 HeLa cells were the first human cells successfully cloned."

What's the difference between multiplying the cells and cloning them? How is multiplying not cloning?

Clones are genetically identical daughter cells from one parent cell. So when you start you culture from one cell, all new cells are clones of this cell. The first three cells (red, green and blue) undergo clonal expansion. 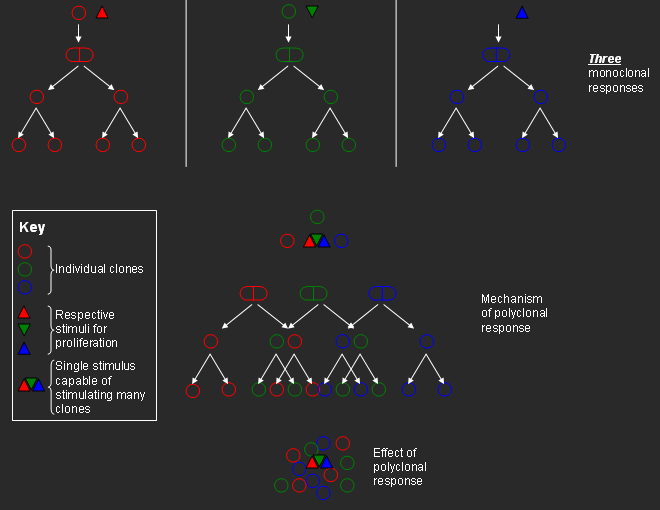 If you multiply cells in cell culture you usually start with thousands of cells, as this can be seen in the second part of the figure. These cells are not genetically identical, as they individually collect mutations. So the daughter cells of each "starter cell" (a lot of them) in the mixture are technically clones, but the whole culture is not seen as clones. See also the Wikipedia on this topic.

Not the answer you're looking for? Browse other questions tagged cell-biology cell-culture or ask your own question.

1
How is it that the WI-38 cell line isolated by Hayflick in 1962 is still very much around and not affected by the 'Hayflick Limit'?
5
What's the recommended maximum passage number for mammalian cells (NCI-H441)?
17
Contact Inhibition of Cell Division: Signaling Pathway
2
What's the difference between the *types* of tissue dissociation enzymes?