How do animals handle light refraction in different media?

For a human, when diving underwater, everything is blurry because of the water's different refractive index compared to that of air, which we are accustomed to. How do animals, like turtles, seals or penguins, handle that difference when changing the medium? Are they nearly blind at surface and can focus underwater or the other way around? Can they adapt to different refractive indexes on the fly? How?

It is more complicated than this, but... I don't think it has as much to do with the refractive index of water but rather the shape of our corneas and the loss of this shape advantage under water, for if the eyes are protected by goggles, one can see quite clearly underwater (much the same as a camera can, as the shape of it's lenses are not affected). Any change in the shape of the cornea changes the way light passes through the eye, and results in a change in vision. The following is from Ch. 9 Optics of the eyes of marine animals, from Light and Life in the Sea:

This is different for penguins (and turtles): the surface of their eyes, the cornea, is not as much vaulted as for humans (it's much flatter), and the lens is much rounder (meaning the shape can change more than our relatively flat lenses can), so the difference between air and water is not so big and the light isn't refracted too strongly. Also, the ciliary muscles (not to be confused with the pupillary muscles) holding the eye's lens (behind the pupil) are stronger, increasing their accommodation, so a penguin has a sharp sight in the water. Or as stated in A Survey of Vertebrate Strategies for Vision in Air and Water

Whereas the cornea is usually the major refractive element of the terrestrial eye, it is of little or no refractive consequence to an aquatic vertebrate.

See the difference in these four vertebrae groups (the first is man, the second is fish, the third is whales (similar to penguins) and the fourth is sirenians - manatees and dugongs)1: 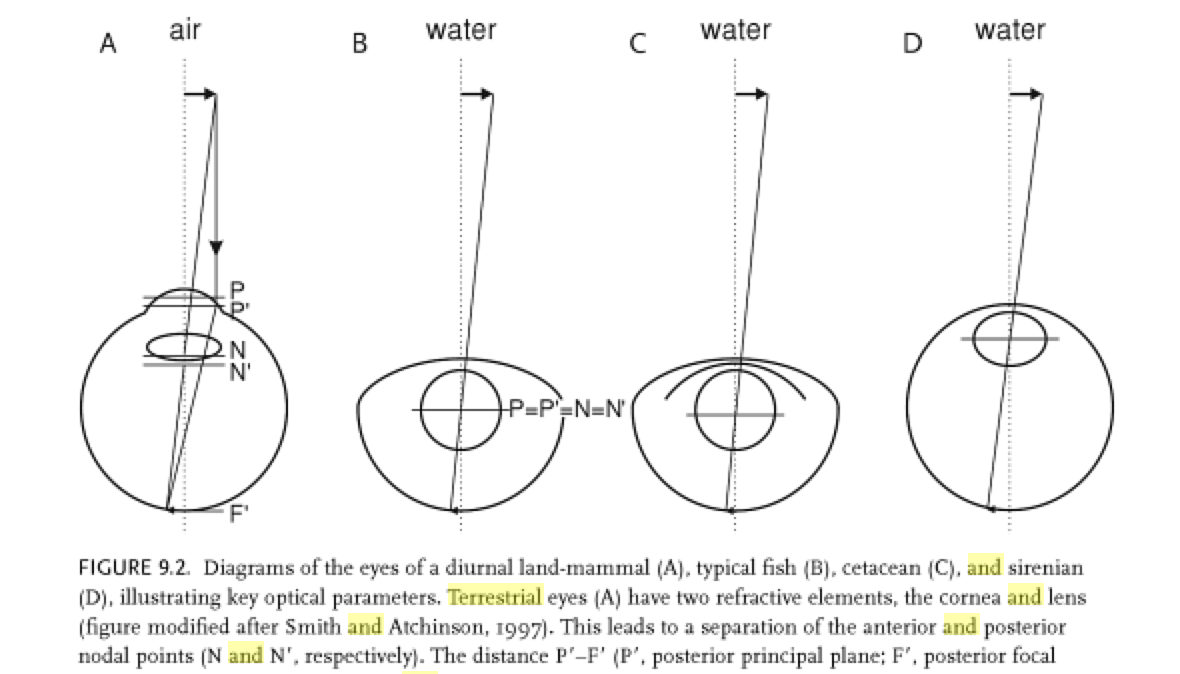 Penguins.info
[1] Comparative anatomy and physiology of vision in aquatic tetrapods

Not the answer you're looking for? Browse other questions tagged physiology zoology eyes or ask your own question.

6
How is hibernation/aestivation different from anesthesia?
5
Perception of artificial light - flickering
14
How do we know the presence of light when our eyes are closed?
4
How do animals lose heat?
4
How can some animals see ultraviolet or infrared light?
7
Can one eye affect the other eye's low-light adaption?
9
How do our eyes detect light at different frequencies?
8
Do animals with their eyes ~180 degrees apart have depth perception?