I'm trying to think about how two neurons communicate, typically shown in pictures as an electric pulse traveling along a long, thin connective tissue.

Is this depiction somewhat accurate, and if so, what happens if both neurons fire at the same time on that connection?

Perhaps the connections are one-way, or they can facilitate pulses going in opposite directions at the same time, or perhaps it's something different all-together. It'd be interesting to have this explained, at least vaguely.

Yes. Action potentials travel only from dendrites towards axon.

typically shown in pictures as an electric pulse traveling along a long, thin connective tissue.

What connective tissue? That thin "wire" which carries the action potential is a part of the neural cell body called axon.

Depending on what the axon connects to, there are 6 types of synapses: 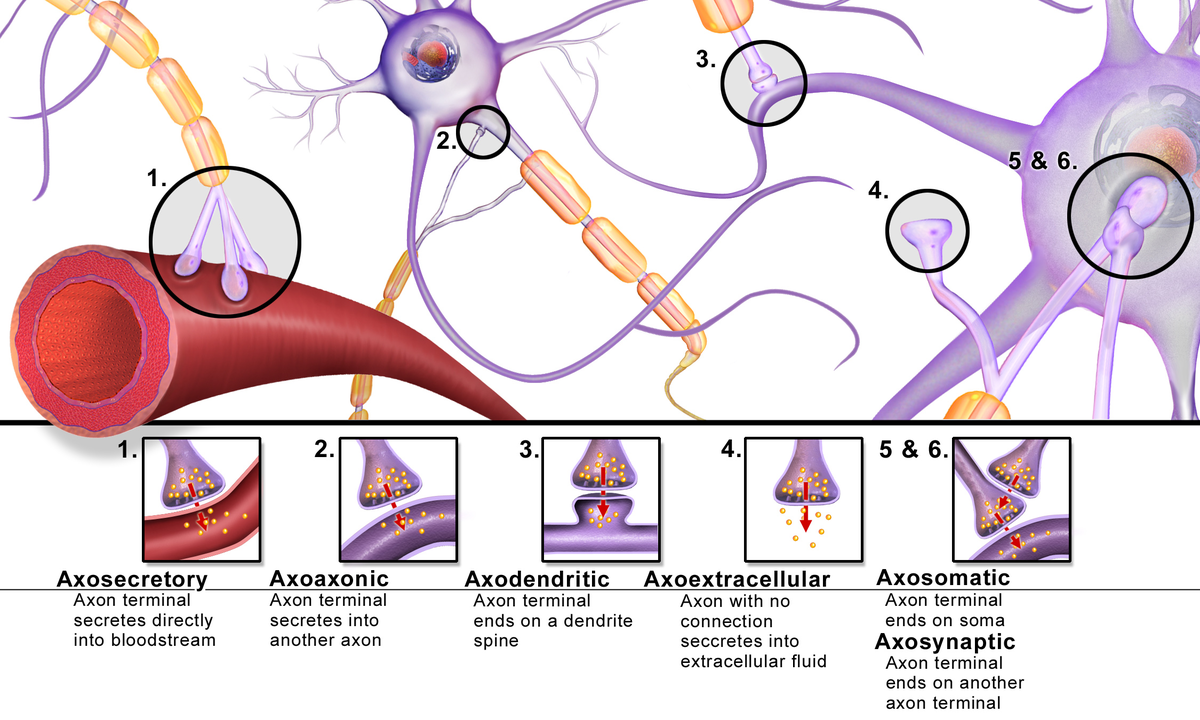 A synapse is the connection between two structures: the axon of a neuron which "outputs" a signal (chemical or electrical) and the other structure ("input") that can be:

what happens if both neurons fire at the same time on that connection?

In the situation of an axoaxonic synapse (example 2 and even 5 and 6 from the above illustration), the presynaptic neuron can have inhibitory action (nicely explained on michaeldmann.net at Presynaptic inhibition) from where I quote:

Activity at the axoaxonic synapse partially hypopolarizes the terminal so that, when an action potential comes down the [...] afferent fiber into that terminal, its amplitude is reduced. Because the amount of transmitter substance released by a bouton is proportional to the amplitude of the action potential in it, less transmitter substance is released, resulting in a smaller EPSP and less excitation of the postsynaptic cell [...]

First of all, let me clear up a small confusion: a connective tissue is a histological term and isn't relevant to this question :) Check https://en.wikipedia.org/wiki/Connective_tissue on that

That already suggests that the depiction you describe isn't accurate. I would hope that you have seen something like this, which shows a neuron's structure in a very simplified version: 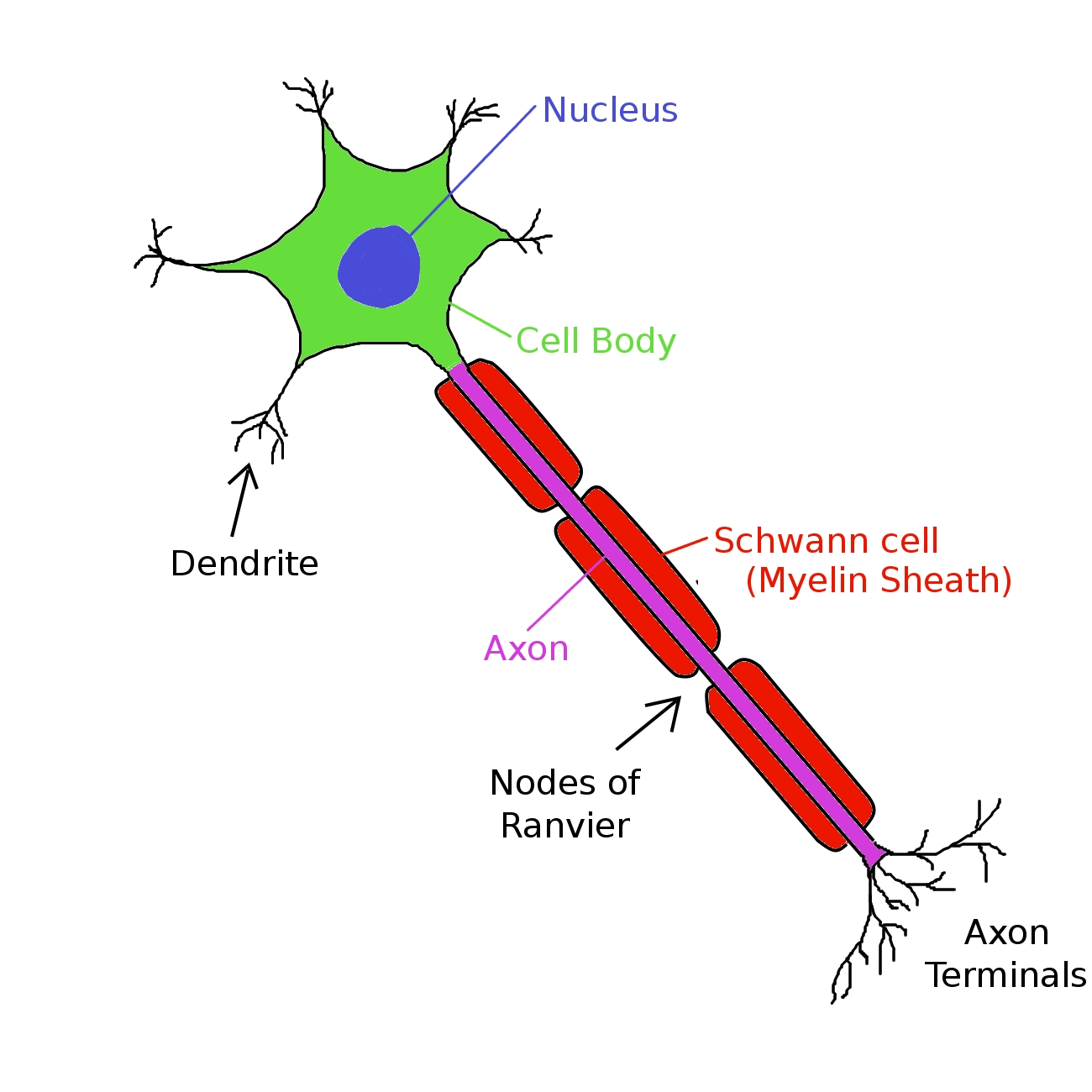 Summarised and simplified, various kinds of impulses (chemical, mechanical or electrical for example) are received at the dendrites, where they generate electrical potential changes. These spread by diffusion across the cell body. At the axon hillock, the point where the axon starts, all of these changes collect and sum up to a net change. If this crosses a certain threshold, the axon hillock generates a so-called action potential, i.e. an electrical impulse. This impulse then travels down the axon until it reaches the terminals. Terminals attach to other neurons (or e.g. muscle cells) via synapses. When an action potential reaches a terminal, the impulse will be carried across the synapse and cause a specific effect on the next cell.

As you can see, there is a clear single-direction signal transfer here: Input -> Cell body -> Axon -> Output. The cell that receives the output can't "fire back" in any way because it receives that signal as an input itself.

A diagram of a pathway including several neurons might thus look like this (neurons are drawn as yellow cell bodies and arrows to indicate where their axons reach): 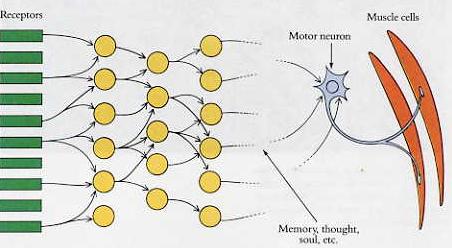 This does get a bit more complicated when you consider nerves rather than individual neurons. Nerves are bundles of several axons and contain no cell bodies. This means that in effect, nerves are a lot like electrical cables, and like cables it is actually possible to force electrical current running either way along the cable, or to override a signal running in one direction by sending a signal in the opposite direction. This is relevant for example in pain perception where some theories suggest that pain signals might actually be interrupted on their way up a nerve by direct inhibition on the axon bundle (caused by other neurons), see the first diagram here under 8.2: http://neuroscience.uth.tmc.edu/s2/chapter08.html

Neural axonal connections are physiologically one-way, in that an action potential would never back propagate. Since the signal is physiologically initiated near the cell body (dendritic input region) the normal flow of information therefore is dendritic-to-axonal. However, when axons are electrically activated (through neural implants such as auditory or sensory prosthetics etc), the signal will propagate both ways, i.e., to the axon terminal, but also to the cell body. It is by means of the ion channel opening-and-closing kinetics that action potentials travel only one way, namely away from the point of initiation. The axon itself is not gated in any way- it has no sense of directionality and sustains both directions.

The connection is one way, the input comes in the dendrites, while the output goes on the single axon in the neuron. 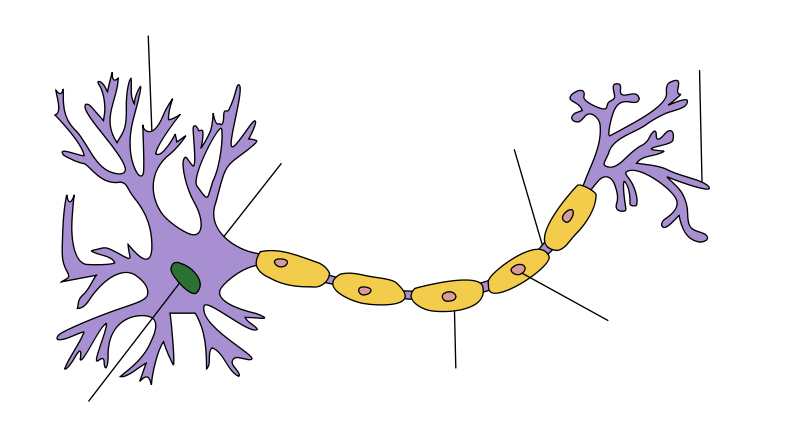 The axon of the presynaptic neuron can connect e.g. to the dendrite of a postsynaptic neuron, and so they can form synapses in which they use neurotransmitters to transmit the signal.

There can be different targets to an axon, not just dendrites, e.g. another axon, muscle cells, etc...

Not the answer you're looking for? Browse other questions tagged neuroscience neuroanatomy neurotransmitter or ask your own question.