I've read that CT scan causes radiation equivalent to few hundreds of ordinary X ray scan. It sound scary at the first look of it but I wonder is it the amount considered significant? Can dosage equal to the 1 CT scan significantly increase chance of developing cancer or other adverse effects?

Xrays are not scans. They are one shot (or a series of a few). Say that a chest Xray (two views) doses you with .1 mSv of radiation. The dose from a standard chest CT is 7 mSv.[1] That is 70 times what a chest film gives you, not a few hundred (though that might seem like quibbling). The TL;DR answer is: no one knows for sure.

Radiation (especially in fetuses -children) increases the likelihood of cancer. Our information comes mostly from atomic bomb survivors, people exposed at Chernobyl, people treated with high doses of radiation for cancer and other conditions, and people exposed to high levels of background radiation, e.g. uranium miners.

Can one CT scan increase your chance of developing cancer? Yes, but how significant that is remains debatable. It depends on a lot of unmeasurable things: genetics, your age, your ability to repair the damage, which area of the body is being dosed, whether there are other carcinogens at work (e.g. viruses or co-carcinogens), etc.

The following are commonly found numbers (which does not mean they're accurate). Given 10,000 people, about 2000 will die of non-radiation related cancers. If you expose those 10,000 people to 10 mSv of radiation, you can expect 5-6 additional cancer deaths in that 10,000 (or .5% increase). [2] However, if you expose someone to 10 mSv twice, with two months in between, the risk does not double.

So, let's say that your average CT scan is going to give you 7 mSv of exposure (that's a high estimate). What is your chance of getting a lethal cancer from that? The answer is: no one knows.[6]

Relative risk has be calculated by some. The following all give you a (estimated) 1 in a million chance of dying from that event[7]:

So, you can estimate that (maybe) the risk of dying from a 7 mSv CT scan is about equivalent to driving 2800 miles.

The point of all this is, no one knows your exact risk of developing a lethal or relatively non-lethal cancer (yes, that does exist) from an imaging study. Most ethical Radiologists will tell you there is no known safe radiation exposure, and that one should avoid unnecessary radiation exposure. While some imaging studies are unnecessary, some of them are not, and the risk of avoiding the study greatly outweighs the risk of undergoing it. What you can do to protect yourself:

[1] XrayRisk.com
[2] USEPA Radiation and Health
[3] Radiation and Life
[4] Higher accumulated doses of radiation might produce a cancer which would only be observed several - up to twenty - years after the radiation exposure. This delay makes it impossible to say with any certainty which of many possible agents were the cause of a particular cancer. In western countries, about a quarter of people die from cancers, with smoking, dietary factors, genetic factors and strong sunlight being among the main causes. Radiation is a weak carcinogen, but undue exposure could certainly increase health risks.
[5] American Nuclear Society
[6] Risks of Radiation
[7] Radiation and Risk

As a rule of thumb you can say that a CT scan exposes you to a higher dose than a X-ray examination, due to the different techniques. For CT scans a number of single 2D photos is processed into the 3D models. However, the dose strongly depends on what body part is examined. See a part of this table (the complete table can be found in reference 1): 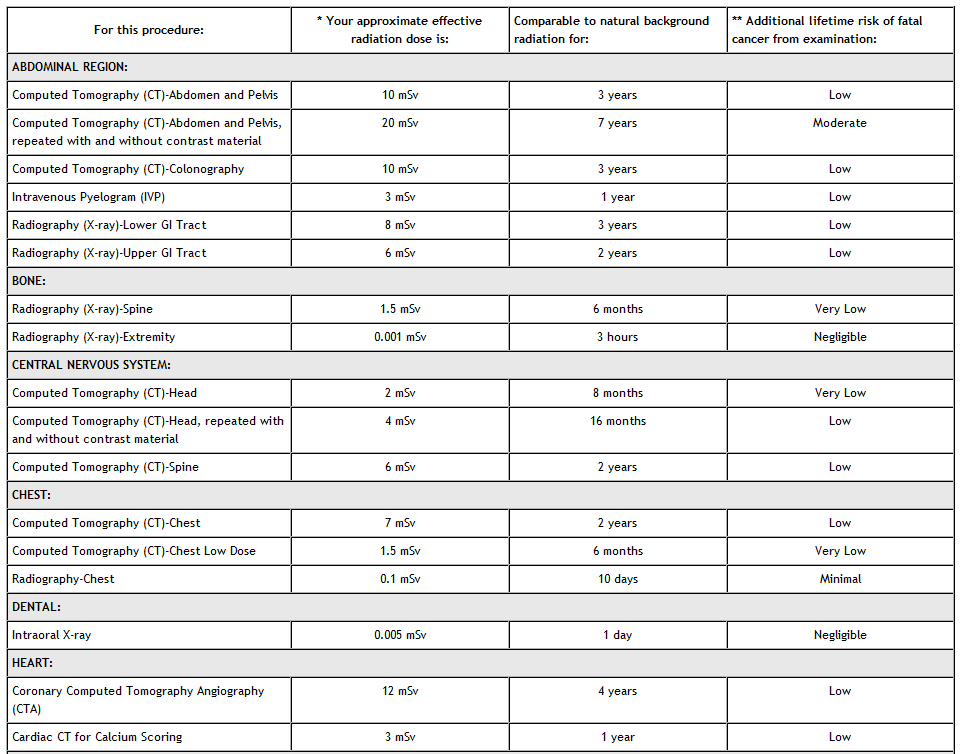 The additional risk for most examinations is low to very low and since we don't get x-rayed on a daily basis this is a risk which can be tolerated. Besides this, there are other exposures to radiation which also accumulate, but where people usually don't hink about it. These are for example smoking and flights at great altitudes. See the answer from @anongoodnurse for some more details on this.

Not the answer you're looking for? Browse other questions tagged cancer radiation or ask your own question.

2
Can radiation exposure cause cancer later in life even if no traces of radioactive material are present in the body anymore?