Is protein kinase-A located in the cytosol/cytoplasm of cells or in the plasma membrane? Also, is it considered a receptor molecule since it is dependent on cAMP?

Any and all help is appreciated. Thanks! 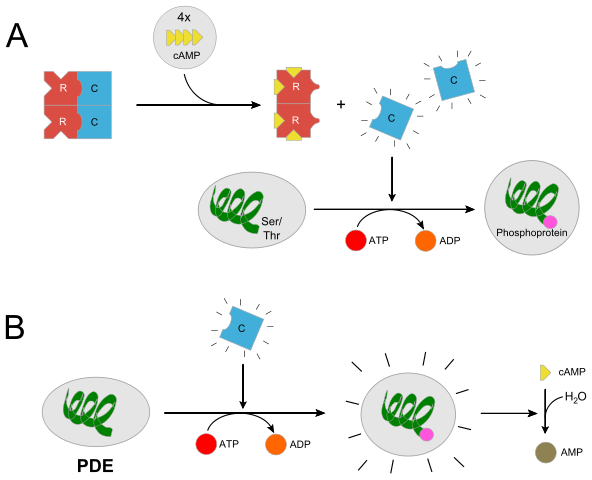 Each regulatory subunit R is binding two cyclic AMP (cAMP) molecules and dissociates then from the protein complex. This sets the catalytic subunits free, which can then transfer phosphate groups from ATP to serine or threonine residues of target proteins. Among the target proteins is also the Phosphodiesterase (PDE) which gets activated by phosphorylation from PKA. Activated PDE hydrolyzes cAMP into AMP which reduces the amount of free cAMP which is necessary for PKA activation. PKA is also inactivated by phosphorylation.

In the cell you will find PKA almost everywhere. The traditional belief is that the protein is activated in the cytosol and enters the nucleus where it phosphorylates targets like CREB which then subsequently binds the the CRE sequence in gene promoters and activates this genes. Reference 1 shows that PKA is also activated in the nucleus, meaning that also the inactive form is present there. Reference 2 gives a nice summary of the article.

The regulatory subunit of inactive form of PKA binds to a special class of proteins: The A-kinase anchor proteins (AKAP). These are membrane bound and allow the association of PKA to membranes, although the protein itself is not directly binding to the membrane. The AKAP family is rather big (at least 50 family members are known today), which probably allows the localization of PKA at different membranes. Have a look at references 3-5 for details on the localization and the anchoring.

It is present throughout the cytosol but can also be anchored to plasma membrane and mitochondria via indirect interactions. Can also be translocated to the nucleus. (See here).

It is not called a receptor for cAMP (though the mechanism is homologous).

5
What's the duration between the binding of adrenaline to β-AR and the first translated protein?
5
How can a ligand be an integral membrane protein?
8
If so many different hormones/molecules work by activating adenylyl cyclase, how do they have different effects?
13
What is the difference between cytosol and cytoplasm?
1
Can a constitutively active kinase be highly regulated?