Are the intestinal microbiota substantially different within a diverticulum of the colon?

From the Wikipedia page for the vermiform appendix:

This proposal is based on a new understanding of how the immune system supports the growth of beneficial intestinal bacteria, in combination with many well-known features of the appendix, including its architecture, its location just below the normal one-way flow of food and germs in the large intestine, and its association with copious amounts of immune tissue. Research...showed that individuals without an appendix were four times more likely to have a recurrence of Clostridium difficile.

This quote seems to be implying that the appendix can act as a breeding ground for certain gut flora that are slightly less common (like C. difficile) and not as ubiquitous as E. coli or Enterobacter sp. The appendix could be seen as an ideal spot for this growth of microbial populations in the gut.

Given that, to a first approximation, anatomically, the appendix and a common diverticulum of the colon are both outcroppings of the large intestine: to what extent would a diverticulum also be able to support less common or more diverse flora, and how likely is this to be due to a difference in extracellular environment (pH, ion concentration) and how likely is it simply due to shape?

The appendix is a type of true diverticulum of the colon, although it is one that is present in everyone (unless a surgeon has removed it). There are bacteria in the gut from the mouth all the way down to the anus, and the numbers and types of bacteria change along the length of the intestinal tract. A recent review from J. Ridlon published in the Journal of Lipid Research (2006) is available online and has documented these observations from a number of investigators. In that paper the bacterial species are described as changing as well as the relative abundances of bacteria which increases along the length of the intestinal tract. Figure 1 from that paper which is open access available from the link above is below. 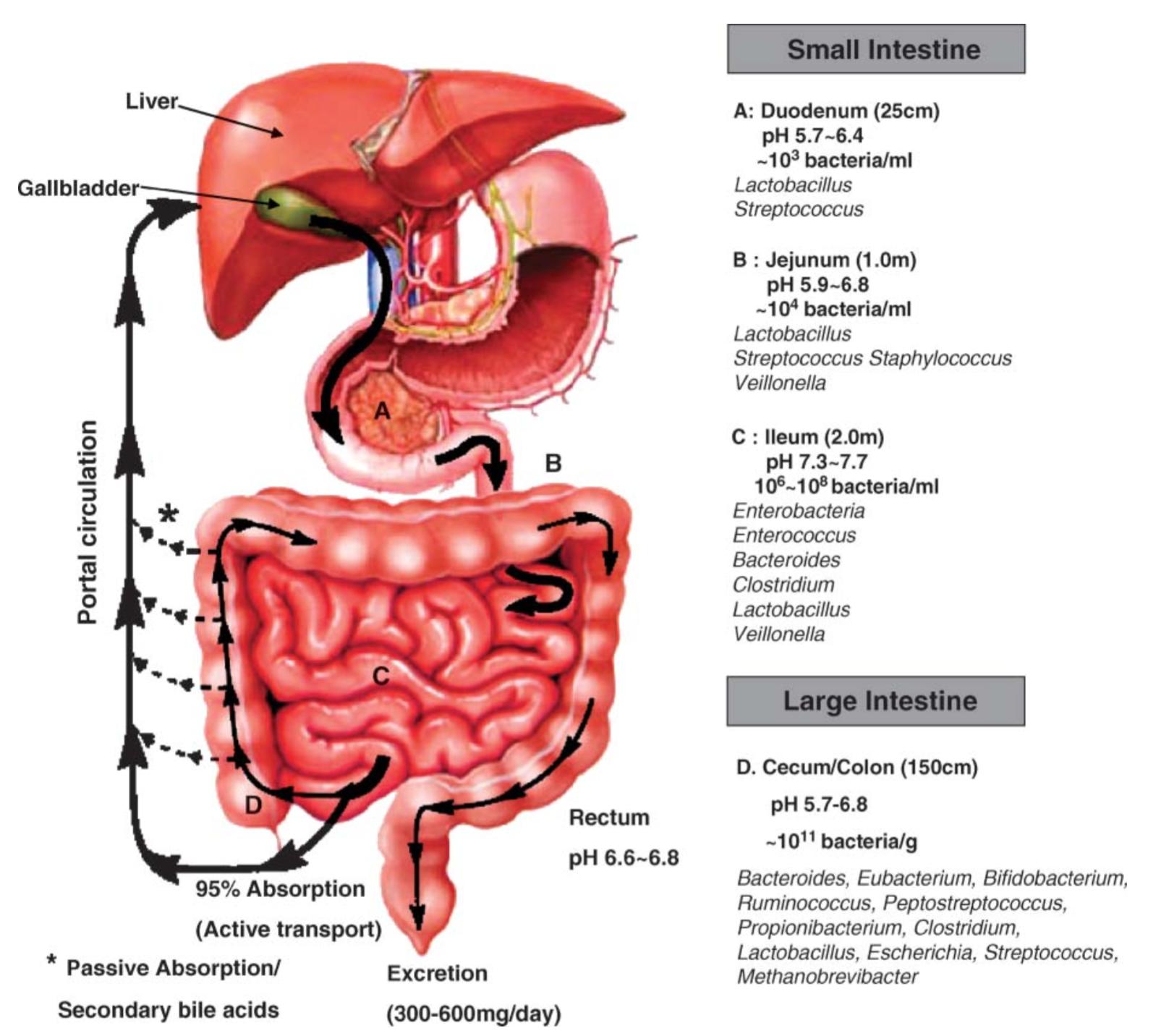 I think its interesting that the wiki page you're citing states that individuals without an appendix were more likely to develop a recurrent C. diff infection. One could interpret that as they did on that site that somehow the appendix is repopulating the colon and making that individual more resistant to a repeat or "Recurrent" infection. However, I don't know of any studies that have directly tested that hypothesis.

In terms of whether or not the gut flora - aka "gut microbiota" - are significantly different in the appendix is possible, but I don't think anyone has identified that just yet. One of the problems with this would be that we don't routinely remove appendices unless they are infected/inflamed which intrinsically would alter the microbiome locally.

So, is it possible that the microbiome could be significantly different in the appendix itself compared to the cecum just a few centimeters away? The answer would be - potentially, but no one has been able to address that question to date.

9
Where do the bacteria within the vagina originate from?
10
What is the effect of garlic on intestinal flora?
8
How does lactulose cause the removal of ammonia from the colon?
2
What is the distance between the sciatic nerve and the colon at the closest point?
5
Do intestinal flora have the same DNA as their host?
0
Where in the digestive tract are melatonin pills dissolved? Same question for gelatin capsules
2
What can pass through the intestinal membranes?
1
Can you increase the microbiota in an insect?
2
Are intestinal and pancreatic lipases different?