Would constant light or fading light be registered as more wakefulness promoting by the Supra Chiasmatic Nucleus?

During the fall and winter season, a number of people are experiencing Seasonal Affective Disorder. One of the way it has traditionally been treated is with a dedicated lightbox - a very high intensity light (5k-15k lux) that is positioned somewhere the user can see it.

One of the possible ways such light affect the brain is through being picked up by Melanopsin receptors in the eye and this info being transmitted to the Suprachiasmatic Nucleus (SCN). The SCN makes sleep/wake decisions by suppressing melatonin release.

It has been tested that melanopsin receptors in the human eye respond most strongly to the light at around 470nm wavelength.

My question is about the mechanism by which this light influences the brain - which would have a stronger influence on the brain: 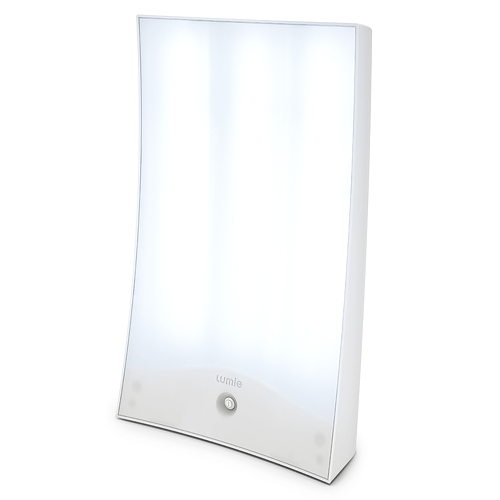 To clarify my question, I know that brain has a number of self-attenuating circuits (for example dopaminergic system), where extended release of some hormone numbs the sensitivity to the hormone. I'm interested - are SCN, melanopsin receptors or melatonin suppressing process are also self attenuating, where prolonged exposure to constant light would attenuate these processes?

There is no light adaptation (such as Arrestin-mediated light adaptation http://www.sciencedirect.com/science/article/pii/S0896627303003908) or other negative feedback loop that attenuates melanopsin that I have ever heard of. Rodents in constant light lose behavioural circadian rhythmicity (http://www.ncbi.nlm.nih.gov/pubmed/23714074), which could technically be due to some sort of long-term depression of melanopsin-mediated signaling, but I have always hypothesized that the rhythm disruption comes from aberrant Period gene expression in the SCN due to constant light signals stimulating its transcription via retinohypothalamic tract->SCN->cAMP->PKA activation->CREB phosphorylation->PER transcription. This paper shows the rescue of rhythms in in VIP knockout animals using constant light (http://www.nature.com/articles/srep14044), suggesting melanopsin signaling remains intact. They also claim that light may be providing tonic input to the SCN, so they are thinking melanopsin is still intact.

In terms of light influencing the brain? That sounds very vague, as light influences the brain in many ways. How would you want to delineate light input via the visual pathway from circadian light input via the RHT? Light can produce an image on your eye, and the higher thought representation of that image could evoke an emotion or an arousal state. This would be wholly different than a circadian effect.

Not the answer you're looking for? Browse other questions tagged human-biology endocrinology vision circadian-rhythms melatonin or ask your own question.