Are all single-celled organisms Bacteria?

No, many unicellular organisms are not bacteria. Examples include (but certainly not limited to); some fungi, chlorella algae, and archaea.

Bacteria are one of three domains in the classification of life. You can find more about the bacteria domain at the wikipedia page (It's a long and complex history which is hard to summarise here) and about the domains here. This last defines bacteria loosely consisting of "prokaryotic cells possessing primarily diacyl glycerol (DAG) diester lipids in their membranes and bacterial rRNA, no nuclear membrane, traditionally classified as bacteria."

Initially Archaea was called Archaebacteria. Because of significant differences, including the membrane composition, they are now grouped into a different kingdom.

No, as @rg255 already mentioned, bacteria are one of the main kingdoms of life: 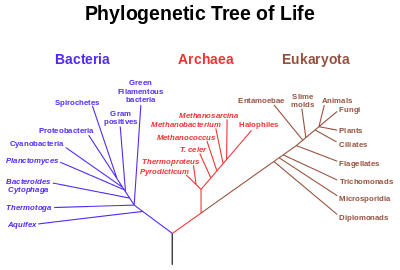 In other words, all bacteria are unicellular but not all unicellular organisms are bacteria.

Not the answer you're looking for? Browse other questions tagged immunology bacteriology or ask your own question.

1
Why don't bacteria eat food leftovers?
4
Are there bacteria that respire anaerobically in aerobic conditions?
2
Does xylitol kill all kinds of bacteria?
8
Why do bacteria produce H₂O₂?
1
Possible for bacteria to burst container?
1
Do bacteria exist which live exclusively on non-organic matter?
14
Are there phage-eating bacteria?