How do marine mammals control buoyancy?

Presumably, as a whale or seal dives, its lungs get compressed by the increasing water pressure, and it gets less buoyant.

The amount of air that keeps you neutrally buoyant at 10 meters will inflate to twice the volume once you surface, keeping you pinned there. Speaking as a scuba diver, I can say that it would take a lot of work to dive back down to 10 meters. (We deflate our air vests at the surface and re-inflate at depth from our incompressible tanks, something animals don't have.)

For very deep divers like sperm whales, swimming down against positive buoyancy seems like a huge energy waste, the kind that one might expect wouldn't be tolerated long by evolution.

So do marine mammals do anything to compensate for the effect of fluctuating lung size on their buoyancy? One guess is that they actually exhale fully before diving, thus making lung buoyancy a small player in the overall body buoyancy. Another guess is that they compress the air with their chest muscles at the surface in order to sink. These are just guesses; I'd love to hear the real story.

From what I can tell, marine mammals can't dynamically control buoyancy during a dive. They ease the beginning of the dive by starting with a small lung volume to reduce buoyancy.

Pinnipeds like seals do this by exhaling half their breath before diving.

Deep-diving whales actually breathe in before diving, but their lungs are small relative to body size to begin with. This makes their surface buoyancy weak enough to swim against without great difficulty (unlike humans).

As they dive their lungs compress rapidly with depth:

At 90m, the lungs are already at 10% original volume. Pretty soon they've shrunk enough that their effect on buoyancy is negligible compared to the density of the incompressible tissues. Presumably, these are close to neutrally buoyant (though the fact that dead whales sink suggests that they're slightly negatively buoyant).

Thanks to @souvik-bhattacharya for the ucsc.edu link. 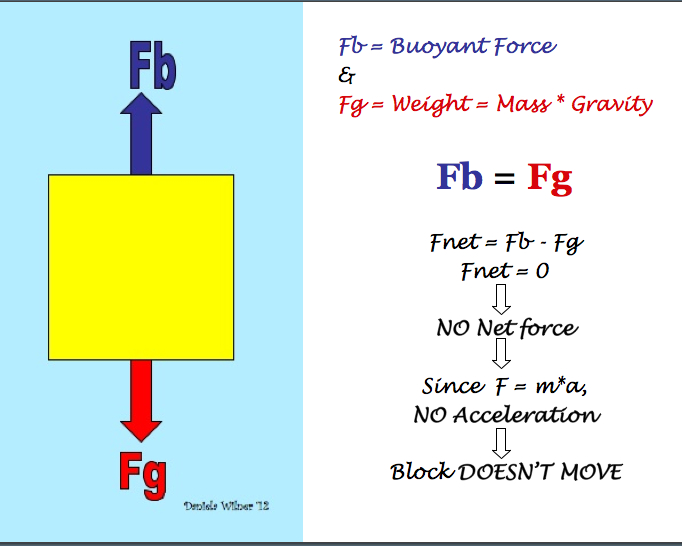 This scenario is called neutral buoyancy, and it's what marine mammals have, so it doesn't take energy for them to stay still in the water, and it's not particularly hard for them to go up or down when they want to either.

Imagine an animal that is as dense as a rock trying to swim up for air, or one that has low density, like a balloon, trying to dive down to find food; it would take a lot more energy to counteract that net buoyancy-weight force (up or down) than it would if that net buoyancy-weight force was 0. So by having neutral buoyancy, marine mammals save energy.

And how do they achieve neutral buoyancy?

They have more fat in their bodies (fat is less dense than water), It also helps that saltwater is a little more dense than pure water, so the buoyant force is a little stronger.

So...as you predicted...neutral buoyancy helps them, but not by inhaling specific amount of air...instead one can say that's their inherent property...

Not the answer you're looking for? Browse other questions tagged zoology biophysics mammals marine-biology bio-mechanics or ask your own question.

4
What are the buoyancy control mechanisms of Chambered nautilus?

17
Why is there a difference in the rotation of the tail fin in fish compared to marine mammals?
8
Why do stranded marine mammals die so quickly?
6
What is the fastest marine mammal?
4
What are the buoyancy control mechanisms of Chambered nautilus?
21
How and why did mammals go back to the oceans?
12
How do diving marine mammals avoid decompression sickness?
3
How do marine mammals and penguins maintain bone density?
2
Why do sea mammals die on land, and drown on sea?