Is there a difference between polarity and hydrophobicity?

From literature the two terms seem to be interchangeable when discussing protein domains and motifs. But biochemically, what are the specific differences between these two terms?

For example what is the difference in these sentences:

Hydrophobicity means aversion to water which results because of increase in entropy of the system due to the water-"solute" interaction.

As already pointed out in by inf3rno, polarity of a molecule is because of its net dipole moment. It is true that polar molecules can dissolve in water (because they can interact with water via van der Waals' forces especially Keesom and Debye forces).

CO2 is apolar but dissolves in water (it actually reacts with water). Most apolar substances cannot interact with water via van der Waals forces.

To sum up, usually polar substances are not-hydrophobic (i.e they are hydrophilic), however some polar molecules such as nitriles, ketones and esters can be hydro-neutral (midway between hydrophobic and hydrophilic. See here). Even large polar molecules are insoluble in water such as 1,2 dichlorobenzene and nitrobenzenes (For something to be soluble the solute-solvent interactions should be stronger than solute-solute interactions. "Water insoluble" may not be equivalent to "hydrophobic").

Conversely, apolar substances are hydrophobic (unless they are reactive solutes such as Cl2 and CO2).

Hydrophilic means attracted to water, while polar means the molecule has electric pole(s).

A hydrophilic molecule or portion of a molecule is one that has a tendency to interact with or be dissolved by water and other polar substances.

A polar molecule has a net dipole as a result of the opposing charges (i.e. having partial positive and partial negative charges) from polar bonds arranged asymmetrically.

Bonds can fall between one of two extremes — being completely nonpolar or completely polar. A completely nonpolar bond occurs when the electronegativities are identical and therefore possess a difference of zero. A completely polar bond is more correctly called an ionic bond and occurs when the difference between electronegativities is large enough that one atom actually takes an electron from the other. The terms "polar" and "nonpolar" are usually applied to covalent bonds, that is, bonds where the polarity is not complete. To determine the polarity of a covalent bond using numerical means, the difference between the electronegativity of the atoms is taken. On the Pauling scale, if the result is less than 0.4, the bond is generally nonpolar covalent. If the result is between 0.4 and 1.7, the bond is generally polar covalent. If the result is greater than 1.7 the bond is generally considered ionic.

Water is polar. because oxygen (3.5) is more electronegative than hydrogen (2.2) and the difference (1.3) is between 0.4÷1.7. So the oxygen has a slight negative charge, while the hydrogens have slight positive charges in water.

Polar molecules are hydrophile. e.g NH3, EtOH, etc... Apolar (or nonpolar) molecules are usually hydrophobe, but there can be exceptions e.g. Cl2 is apolar, but more water soluble than CO or CO2, because of a chemical reaction (Cl2 + H2O → HOCl + HCl). Alcohols contain the polar -OH group. Short chain alcohols are water soluble and so hydrophile, while long chain alcohols are less water soluble, they are hydrophob, because most of the molecule contains apolar bonds. Molecules with ionic bonds, like NaCl are hydrophilic, but not necessary water soluble (e.g. AgCl is poorly soluble in water). So I think hydrophilicity and polarity are not synonyms. However these are just the exceptions, most of the hydrophilic compounds are polar and most of the hydrophobic compounds are apolar.

Amino acid residues (and ofc. side chains) are no exceptions, so in the case of them these terms are synonyms (at least by the 20 common amino acid certainly).

The HP (hydrophobic-polar) protein folding model comes from the article of Dill. He talks mostly about solvophobic and solvophilic residues. In the context of water use the terms hydrophobic, polar and charged amino acid residues. This kind of amino acid classification might be older, but (I assume) it was not so important before the HP model.

solvent to a medium consisting of pure solvophobic residues. For the treatment of water-soluble proteins, -(q - 2)g thus describes the transfer of hydrophobic residues from water to a hydrophobic environment; for the treatment of membrane proteins, -(q - 2)g characterizes the transfer of polar or charged res idues from an apolar medium to a polar environment.

According to Dill's article residues can be

I checked the google either:

So all of the hydrophilic, hydrophobic, nonpolar, polar, charged words are used frequently. I checked some books and articles, some of them use the "hydrophobic-polar-charged +/-" classification (just like Dill) which seems to be elder than the "nonpolar - polar (neutral, acidic, alkaline)" classification in other articles.

For example what is the difference in these sentences:

I don't think there is any difference between the meaning of these two sentences.

I think the more interesting question is which amino acids are in which groups. I checked some hydrophobicity scales. 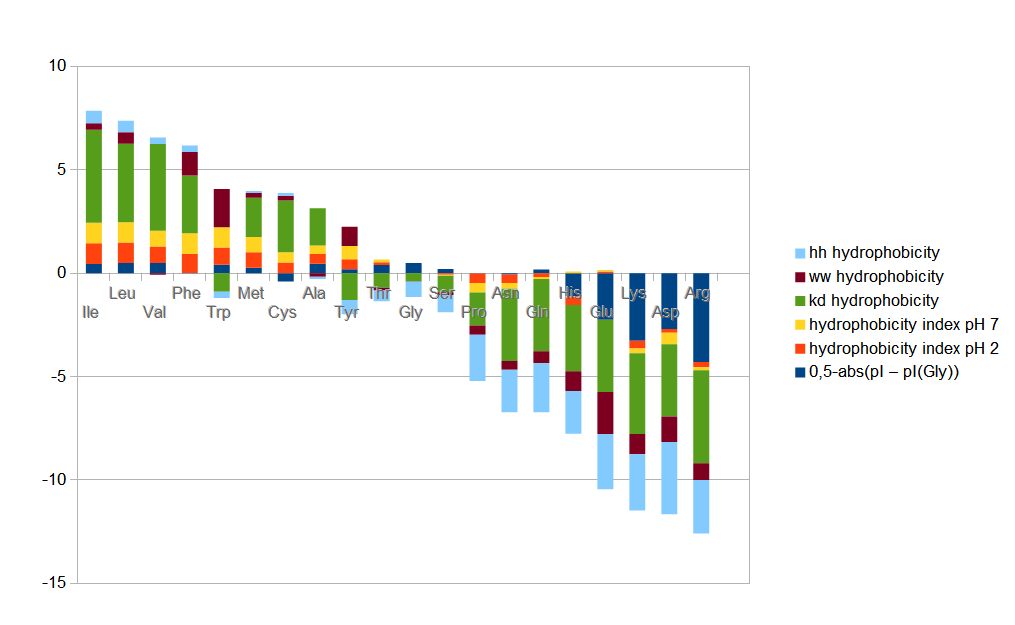 It seems to be far from obvious. As you already mentioned it is a continuous spectrum and hard to create groups. It was interesting that Trp (which is strongly apolar) had negative numbers on two scales (maybe the data was not reliable). What you can tell, which amino acids are certainly polar (hydrophilic) and which are certainly apolar (hydrophobic). Based on this information you can tell which residues will be in the apolar core (hydrophobic residues) and which will be on the polar exterior (hydrophobic residues) and which will create the backbone hydrogen bonds (polar residues) and probably salt bridges (polar, charged residues). Ofc. all of these can more or less depend on the pH...

9
Why don't phospholipid bilayers dissolve?
4
Are There Rules for How Proteins Are Formed?
1
What is the difference between polar and charged amino acids?