I understand that apoptosis and necroptosis share the same upper part of the pathway, but I cannot seem to distinguish when is each one activated? From my readings, it seems that when procaspases 8 or 10 are unavailable, the cell will shift to necroptosis. What makes these procaspases unavailable and why does a cell second the necropotosis?

From my readings, it seems that when procaspases 8 or 10 are unavailable, the cell will shift to necroptosis. What makes these procaspases unavailable and why does a cell second the necropotosis?

This seems to be right.

Caspase-8 is a cysteine protease critically involved in regulating cellular apoptosis. On activation of death receptors, including TNF-receptor and Fas, caspase-8 is activated by limited autoproteolysis and the processed caspase-8 subsequently triggers the caspase cascade that finally leads to apoptotic cell death. Caspase-mediated apoptosis is important for the turnover of IECs and for shaping the morphology of the gastrointestinal tract 4.

Caspase-8 has both prodeath and prosurvival roles, mediating apoptosis and/or preventing RIPK1-mediated necroptosis depending on cell type and stimulus. We found that inflammatory stimuli (LPS, lipoteichoic acid, or TNF-α) caused an increase in caspase-8 IETDase activity in primary rat microglia without inducing apoptosis. Inhibition of caspase-8 with either Z-VAD-fmk or IETD-fmk resulted in necrosis of activated microglia. Inhibition of caspases with Z-VAD-fmk did not kill non-activated microglia, or astrocytes and neurons in any condition. Necrostatin-1, a specific inhibitor of RIPK1, prevented microglial caspase inhibition-induced death, indicating death was by necroptosis.

Necrosis has long been described as a consequence of extreme physicochemical stress, such as heat, osmotic shock, mechanical stress, and freeze-thawing, which kill cells quickly and directly. Therefore, this cell death has been described as uncontrolled and accidental necrosis characterized by loss of plasmamembrane integrity and cellular collapse, though nuclei remain largely intact during this process (Krysko et al., 2008a,2008b; Vanden Berghe et al., 2010). Loss of membrane integrity and release of intracellular content grant necrotic cells the ability to induce an inflammatory response. These immunogenic endogenous molecules fall under the umbrella term ‘‘damage-associated molecular patterns’’ (DAMPs) (Garg et al., 2010; Kryskoet al., 2011). They include, in the case of accidental necrosis, HMGB1, IL-1a, uric acid, DNA fragments, mitochondrial content, and ATP (Tables 1and2)(Eigenbrod et al., 2008; Kono et al., 2010; Krysko et al., 2008a; Sauter et al., 2000). Because the nomenclature of DAMPs in the literature is confusing, here we define DAMPs as a family of molecules that are intracellular in physiological condition

Based on the articles above, I would say that capsase-8 is a signal that apoptosis works finely, and so the cell can kill itself whenever it wants. So if that signal is lost because of an infection, mutation or extensive cell damage, the cell has no choice, but to activate the necrotic pathway. 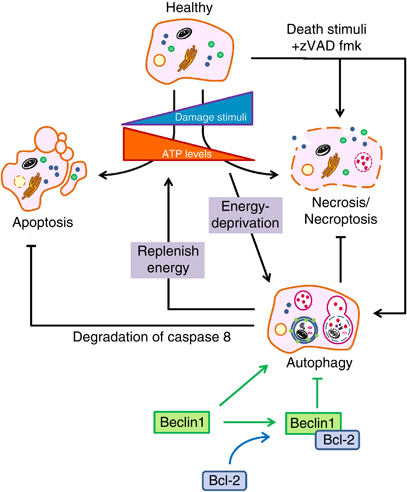 During tumorigenesis, significant loss or inactivation of lead members in the caspase family leads to impairing apoptosis induction, causing a dramatic imbalance in the growth dynamics, ultimately resulting in aberrant growth of human cancers. Recent exploitation of apoptosis pathways towards re-instating apoptosis induction via caspase re-activation has provided new molecular platforms for the development of therapeutic strategies effective against advanced prostate cancer as well as other solid tumors.

These findings reveal that, although apoptotic/drug resistance is a formidable “stronghold” of cancer against chemotherapy, necroptotic susceptibility is an intrinsic “weak point” of cancer.

Playing a central role in cell death, caspases are targeted by different viruses in the aim of prolonging cell survival. For instance, viral IAPs (inhibitors of apoptosis) interact with and inhibit the processed active caspases, either by blocking the catalytic part of the enzymes, or through E3 ubiquitin ligase activity from RING domains, targeting caspases for rapid degradation via proteasome. Baculoviruses, asfiviruses or irridescent viruses encode such IAPs. Another class of caspase inhibitors frequently found among poxviruses include the serine proteinase inhibitors serpins: CrmA/SPI-2. Crma targets cysteine proteases such as host Caspase 1 and Caspase 8.

Pathogens specifically target both the caspase 8-dependent apoptotic cell death pathway and the necrotic cell death pathway that is dependent on receptor-interacting protein 1 (RIP1; also known as RIPK1) and RIP3 (also known as RIPK3). The fundamental co-regulation of these two cell death pathways emerged when the midgestational death of mice deficient in FAS-associated death domain protein (FADD) or caspase 8 was reversed by elimination of RIP1 or RIP3, indicating a far more entwined relationship than previously appreciated. Thus, mammals require caspase 8 activity during embryogenesis to suppress the kinases RIP1 and RIP3 as part of the dialogue between two distinct cell death processes that together fulfil reinforcing roles in the host defence against intracellular pathogens such as herpesviruses.

One potential explanation for this is that this form of death evolved to provide a “backup” pathway. Indeed, cowpox virus produces the factor CrmA, a potent apical caspase inhibitor capable of blocking apoptosis (Ray et al., 1992; Gagliardini et al., 1994). Several viral encoded genes are similarly produced to prevent apoptosis, and thus it is clear that inhibition of apoptosis is an important means viruses have exploited to avoid immune clearance. Interestingly, cytomegalovirus induces RIP3-mediated necroptosis via the interferon regulatory factor DAI (Upton et al., 2012). This virus also produces a protein called viRA, a protein that disrupts assembly of RIP1/RIP3 necrosomes and consequent necroptosis. Thus, while the physiological function(s) of necroptosis remains to be fully elaborated, it is clear that this cellular process has been around for a long time during evolution. It is likely that necroptosis may serve as an “Achille's heel” in tumor cells, and thus greater understanding of the process may reveal novel therapies for cancer therapeutics.

It seems like there is a 3rd pathway too, it is called ferroptosis.

The transition metal iron is essential for life, yet potentially toxic iron-catalyzed reactive oxygen species (ROS) are unavoidable in an oxygen-rich environment. Iron and ROS are increasingly recognized as important initiators and mediators of cell death in a variety of organisms and pathological situations. Here, we review recent discoveries regarding the mechanism by which iron and ROS participate in cell death. We describe the different roles of iron in triggering cell death, targets of iron-dependent ROS that mediate cell death and a new form of iron-dependent cell death termed ferroptosis. Recent advances in understanding the role of iron and ROS in cell death offer unexpected surprises and suggest new therapeutic avenues to treat cancer, organ dam - age and degenerative disease

Not just a 3rd, there are many more pathways (pyroptosis, MPT-RN, parthanatos, ferroptosis, NETosis). 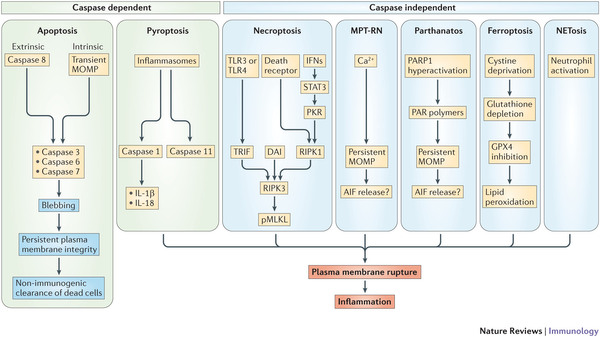 Not the answer you're looking for? Browse other questions tagged molecular-biology cell-biology cell-signaling cell apoptosis or ask your own question.

4
which signalling pathway is involved in cancer?
1
About excessive cellular growth
4
Do two hormones have the same effect on a cell if the second messenger is the same?
1
Exact definition of 'convergent' and 'divergence' in cell signalling?
3
How are cell death like apoptosis and entropy related?