Do all Gram negative bacteria cause septic shock?

It is now recognized that sepsis may occur from bacterial, fungal and viral organisms. More recent epidemiology studies reveal that Gram-positive bacteria have become the most common cause of sepsis in the past 25 years. According to the most recent estimates in sepsis, there are approximately 200,000 cases of Gram-positive sepsis each year, compared with approximately 150,000 cases of Gram-negative sepsis.[3]

Fungal causes of sepsis have also grown at a rapid pace. Why this occurs may be two-fold: a general increase in nosocomial (hospital acquired) cases of sepsis, and more effective treatment of bacterial infections, thus promoting fungal infections to a more leading role. The increase of fungal nosocomial infections has also shifted away from the common Candida albicans organism to the more recalcitrant torulopsis, glabrata and krusei subspecies.[4]

So while the Gram negative Lipopolysaccharide or “endotoxin” is unique to Gram negative bacteria, cell components of Gram positive bacteria have been identified that appear to be biologically equivalent to endotoxin in stimulating the inflammatory response associated with sepsis and septic shock. These include a peptidoglycan layer outside the cell membrane of Gram positive bacteria as well as non-peptidoglycan polymers (such as the teichoic acids). They have been shown to stimulate the release of cytokines, specifically tumor necrosis factor and interleukin-1.[5]

[1] How Ebola Kills You: It's Not The Virus
[2] Septic shock in humans. Advances in the understanding of pathogenesis, cardiovascular dysfunction, and therapy
[3] The epidemiology of sepsis in the United States from 1979 through 2000.
[4] Nosocomial bloodstream infections. Secular trends in rates, mortality, and contribution to total hospital deaths.
[5] Sepsis and Septic Shock
Sepsis, severe sepsis and septic shock: changes in incidence, pathogens and outcomes

The major factor defining Gram-negative (vs. Gram-positive) bacteria is the structure of the cell wall, outer membranes, and the moieties that extend out into the environment: 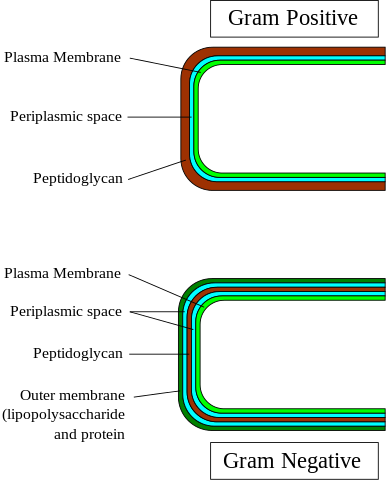 Gram+ bacteria have an inner plasma membrane and an outer, thick layer of peptidoglycans. This is what takes up Gram's stain. Gram-, on the other hand, have a plasma membrane, a thinner peptidoglycan wall, then an outer membrane consisting of lipopolysaccharides (also known as LPS or endotoxin) anchored into the membrane's phospholipids, along with various proteins within the membrane: 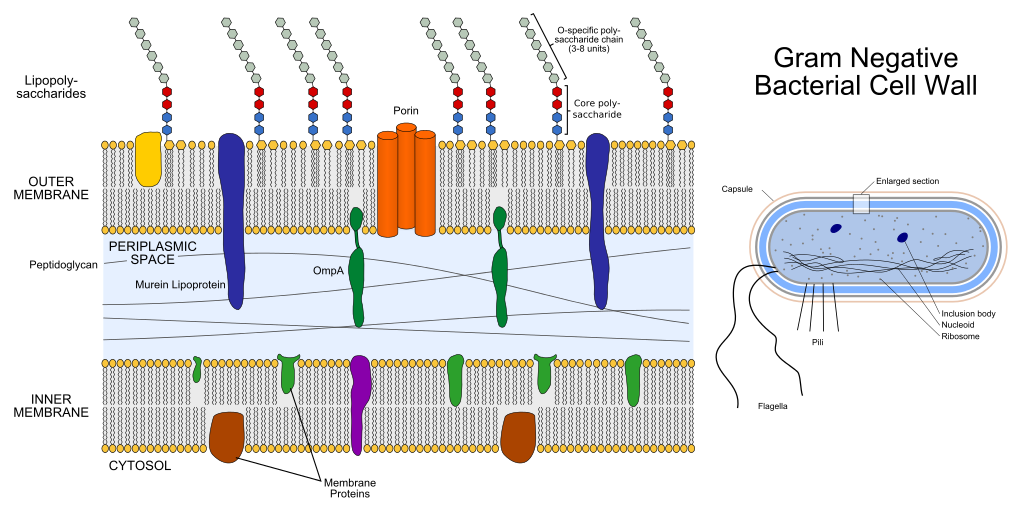 Sepsis, a systemic inflammatory response syndrom (SIRS) can be caused by both Gram-positive and -negative bacteria, as well as viruses and fungi. In the case of Gram-negatives, the immune system is activated in response to the presence of LPS from extracellular lysed and intracellular antigen-processed bacteria, through the Toll-like receptor TLR4/CD14/MD-2 pathway. One can have a local infection, and still not develop sepsis. However, if the infection becomes large enough or the bacteria enter the blood stream in significant numbers, sepsis can occur. Not all patients with sepsis develop septic shock, which is characterized not only by a microorganism-caused SIRS and organ dysfunction/hypoperfusion, but also by chronic hypotension (low blood pressure) even after administration of IV fluids.

Structurally, LPS contains the highly-conserved Lipid A, which anchors the molecule into the outer membrane, a core oligosaccharide, and the outer O-antigen:

Lipid A is actually the most toxic segment of LPS (the portion recognized by TLR4 and MD-2), and while it is generally highly-conserved among different bacterial strains and species, studies have shown that different human-pathogenic species of bacteria have altered Lipid A from the "canonical" structure derived from E. coli. This can cause variations in the downstream signaling from TLR4 to NF-κB, potentially leading to immune system evasion.

So, to directly address your question:

Do all Gram negative bacteria cause septic shock?

They can, if present in sufficient quantities, but not necessarily through the same mechanisms. The immune system recognizes many different pathogen-associated molecular patterns (PAMPs) through a variety of TLRs and other pattern recognition receptors (PRRs) like C-type lectin receptors, Nod1 and Nod-like receptors, etc. Some work on intact bacteria, others recognize intracellular epitopes. Therefore, sepsis and, in severe cases, septic shock, can be caused by Gram-negative bacteria through LPS-independent pathways. While it's possible that lysing these bacteria chemically by antibiotics could potentially enhance the immune response, cells like macrophages are very good at recognizing foreign invaders and lysing them on their own, giving plenty of substrates to the various receptors. Also, keep in mind that dead cells may auto-lyse, so the antibiotics need not necessarily attack the cell wall itself, just kill the bacteria.

Not the answer you're looking for? Browse other questions tagged microbiology medicine or ask your own question.