I had came across an insect near my backyard in India(Kerala). I haven't seen this one before and I searched web to find out what insect is this and found its image which saying its a "Giraffe Weevil" (Trachelophorus giraffa). The link below says that this insect is endemic to Madagascar. 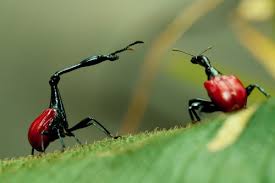 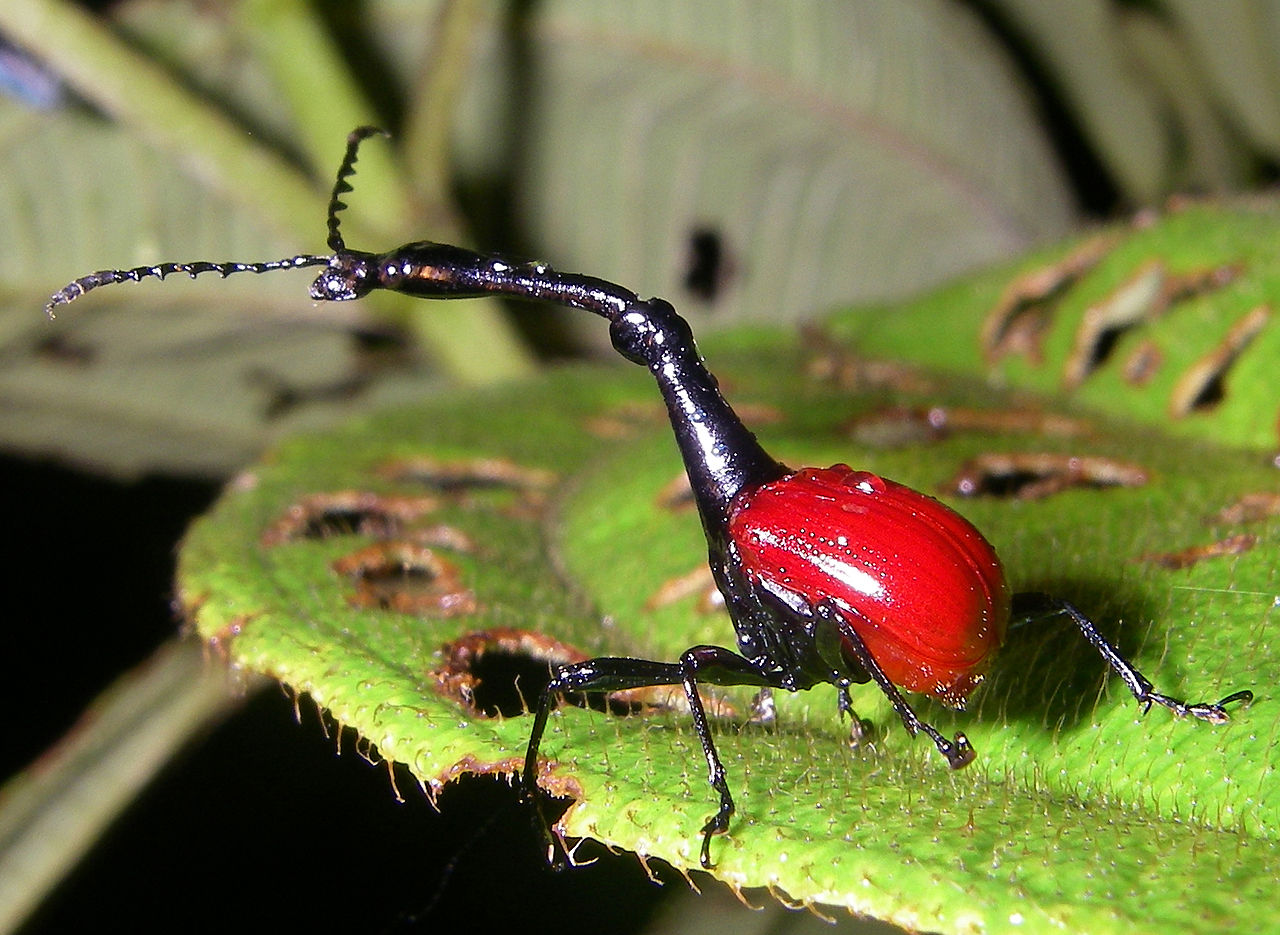 They are herbivore insects, with adults feeding on a tree that is commonly known as the "giraffe beetle tree" (Dichaetanthera arborea)

This states that these insects need the "giraffe beetle tree"(Dichaetanthera arborea) which is also native to Madagascar.

So how come this insect could be found in India(Kerala), and further more all the above links state that the long neck of these dimorphic insects are evolved for fighting and nest making but they do tell that after mating the females will make the nest and lay one egg inside, So did the male insect make any nest in reality, if so then why the male have to perform both nest making and fighting.[Sorry for the errors,also there are more links to this]

As the comment by @terdon says, the most likely explanation is that your species identification is mistaken. The superfamily Curculionoidea, which contains the weevils (Curculionidae are the true weevils) is also extremely species rich. Without seeing a picture of what you found, there are many other similar species with long necks in the family Attelabidae, which is the family of Trachelophorus giraffa. For instance, the wikipedia page includes a picture Apoderus longicollis which is very similar to the Giraffe weevil from Madagaskar, and it is supposed to be found in India (see GBIF info): 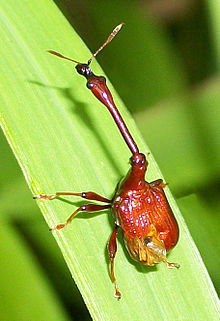 Paracycnotrachelus is another genus found in Asia where some species have long necks. Another giraffe-necked species is also found in New-Zealand - see Lasiorynchus barbicornis - so the overall body shape is not that unique (note that much of the elongation in this species is of the snout though): 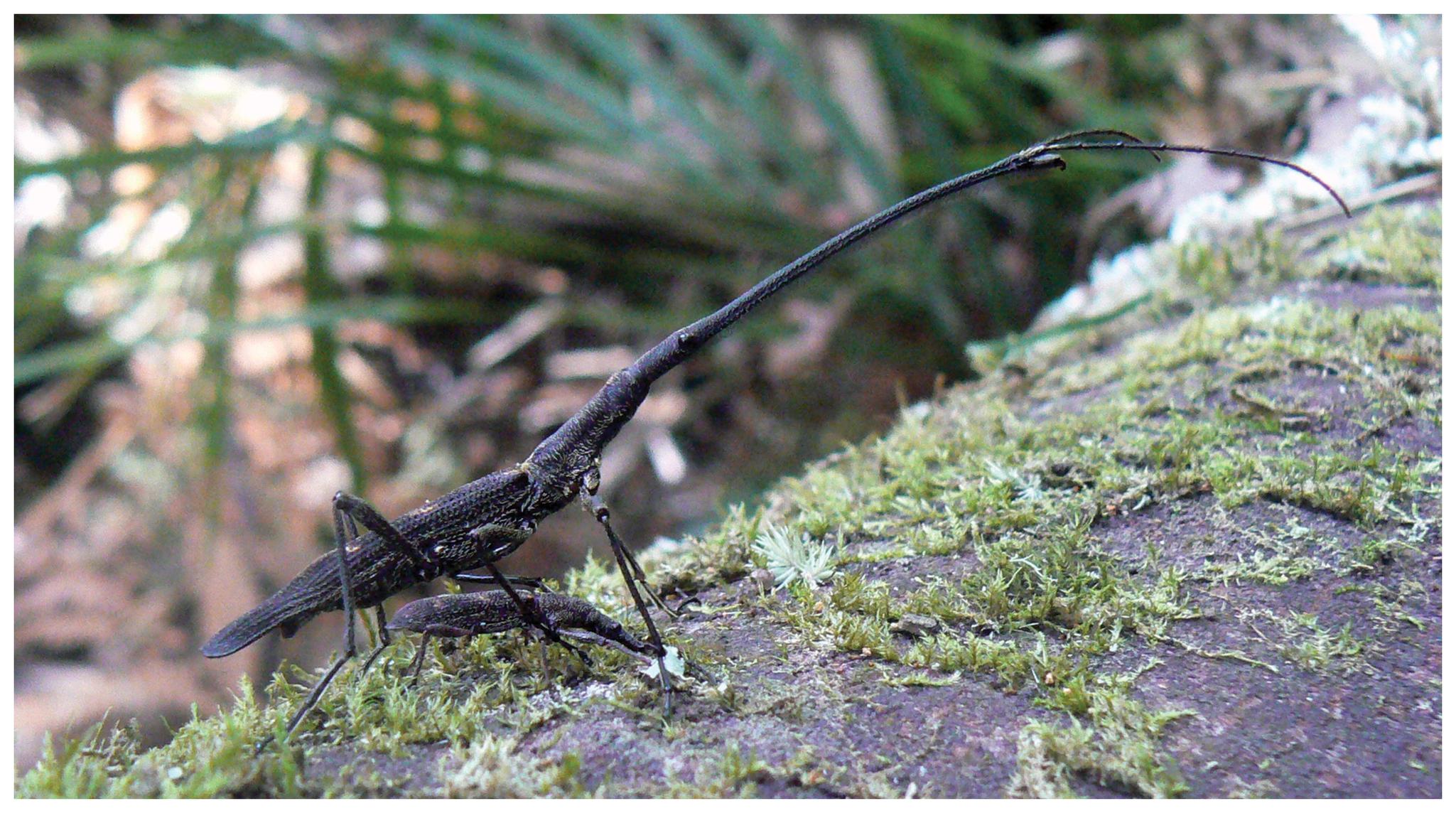 Even if we should never rule out the possibility of range changes/introductions, this must be based on close examinations of the specimen, and it is even more unlikely in this case since Trachelophorus giraffa seems to be a very specialized species.

First of all, the beetle you found likely doesn't belong to Trachelophorus giraffa. There are lots of of species in the family Attelabidae, many of them having long necks in males and some were described or are known known from India.

I couldn't find any primary source on the nesting behavior of Trachelophorus giraffa, and I suspect that most of the web-pages mentioning the male participation in creating the cradle by rolling leaves stem from this popular book, while in at least another popular book it is explicitly written that females make the cradle.

As attested here, "all females of the species Attelabidae make their host-plant leaves into cradles where they oviposit", so I suspect that Trachelophorus giraffa is no exception to this rule. Here is a very detailed description of mating behavior of a species with similarly long neck: males take no part in building the nest and seem to utilize their necks only when competing for female.

14
Do fake wasp nests actually fool wasps?
23
How do burrowing animals get enough oxygen?
3
Is there an ecological scenario where terrestrial insect larvae can show food choices?
9
Can you identify this insect for me?
2
I can't Identify this “bug” that seems attached to fresh cut wood
4
The emergence of Phengaris butterflies from ant nests
1
Why are two-winged animals much more common than four-winged?