How does anger relate to blood pressure?

Anger is an emotion generated by neural processes in the brain and is associated with elevated blood pressure. How can an emotion, which is totally related to brain, result in blood pressure changes?

Anger is a common emotion in most animals and it is highly related to stress. At time of anger body usually releases stress hormones and the body's way to respond to stress is by sympathetic nervous system activation which results in the fight-or-flight response.

Anger is an emotional response related to one's psychological interpretation of having been threatened. Often it indicates when one's basic boundaries are violated. Sheila Videbeck describes anger as a normal emotion that involves a strong uncomfortable and emotional response to a perceived provocation.

Anger may have physical correlates such as increased heart rate, blood pressure, and levels of adrenaline and noradrenaline. Some view anger as an emotion which triggers part of the fight or flight brain response. http://en.wikipedia.org/wiki/Anger

Stress and anger trigger the release of stress hormone Cortisol in the body. Mild releases of Cortisol can give the body a sudden burst of energy,it also may increase the heart rate to 180 times a minute and blood pressure from 120 over 80 to 220 over 130.

Anger is processed in hypothalamus and amygdala,the roles of two peptide hormones, corticotropin-releasing hormone (CRH) is responsible for the production of Cortisol (Primary stress hormone) and arginine-vassopressin (AVP) produces Vasopressin, which triggers blood pressure by increases reabsorption of water by the kidneys, this results in contraction of blood vessels which raises blood pressure.

The human stress response involves a complex signaling pathway among neurons and somatic cells. While our understanding of the chemical interactions underlying the stress response has increased vastly in recent years, much remains poorly understood. The roles of two peptide hormones, corticotropin-releasing hormone (CRH) and arginine-vassopressin (AVP), have been widely studied. Stimulated by an environmental stressor, neurons in the hypothalamus secrete CRH and AVP.

CRH, a short polypeptide, is transported to the anterior pituitary, where it stimulates the secretion of corticotropin (4). Consequently, corticotropin stimulates increased production of corticosteroids including cortisol, the primary actor directly impacting the stress response (5). Vasopressin, a small hormone molecule, increases reabsorption of water by the kidneys and induces vasoconstriction, the contraction of blood vessels, thereby raising blood pressure. http://dujs.dartmouth.edu/fall-2010/the-physiology-of-stress-cortisol-and-the-hypothalamic-pituitary-adrenal-axis#.VH7k8cnQoX0 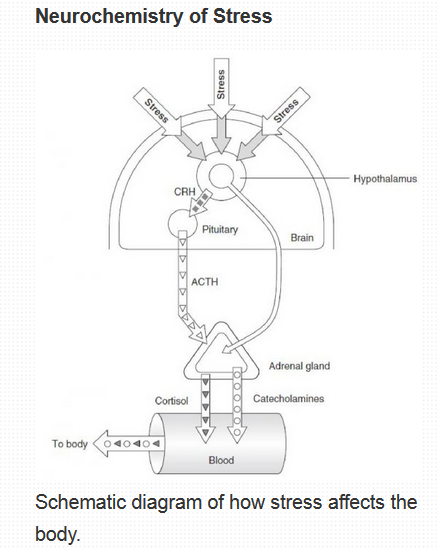 2
Physiologically, how can stress/anxiety cause neuropathy?