How do you accurately measure anguiliform (eel) locomotion?

In one of my courses, we were discussing a paper by Muller and van Leeuwen (2006) which made a lot of comparisons the differences between carangiform (mullet) and anguilliform (eel) locomotion. While reading the text, one of the passages stood out to me:

When comparing the estimates of vortex ring height with those of ring width, mullet and mackerel shed approximately round vortex rings, whereas eel vortex ring are almost twice as wide as they are tall. Such distorted rings are less likely to form and once formed, they are more likely to break up, all of which results in a different vortex pattern in the wake. 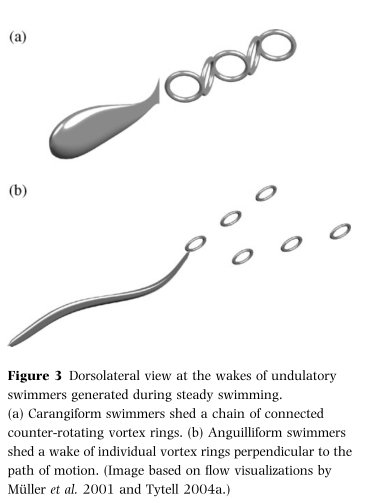 The time-resolved flow fields of eels indeed support the notion that the vortices in its wake break up: two independent studies, visualizing horizontal cross-sections through the eel’s wake, observed that individual vortex cores elongate and split into two (Muller et al. 2001; Tytell 2004a). We can therefore conclude that the shape of the propeller, and hence implicitly the propulsion mechanism, might affect wake shape. This observation also implies that a propeller shape that promotes the formation of a suboptimal wake is less efficient, and therefore the absence or presence of a wake that is predicted to maximize efficiency is a valuable indicator for the hydrodynamic efficiency of a fish’s swimming design.

So, essentially during carangiform locomotion the body of the fish moves 1/2 wavelength whereas anguiliform swimmers make 1 wavelength. My questions are how can they make such a statement when particle image velocimetry (PIV) does not adequately measure the movements of anguiliform swimmers, let alone their efficiency, when they are essentially swimming through their own vortexes? Are there any studies that address this issue in anguiliforms?

Browse other questions tagged physiology ichthyology movement or ask your own question.

16
Can humans transdermally absorb minerals from ocean water, and if so how much?
5
How does anadromous fish physiology “know” to switch from salt to freshwater and back?
4
How can we measure cardiac output?
5
How does an amoeba move?
4
How does a Plasmodium move?
4
How do fishes “breathe” while eating?
2
How many Watt-hours can an electric eel produce in a day?