Norepinephrine is less beta2 adrenomimetic than epinephrine so more selective so less bronchospasm so may be therofore better in treatment of cardiac failure and different shocks.

However, I am not sure.

I have some intuition that some of them is somehow analog of the other one.

PubMed about norepinephrine in Pharmacology

PubMed about epinephrine in Pharmacology

which is logical because epinephrine is nonselective beta2. However, I am not sure if those properties include all accepted indications.

This proposes me that norepinephrine can be used better in acute situations. However, I know that epinephrine injections are more given to allergic people to carry for anaphylactic shock. Why so? Probably, because of price. How does the indications of norepinephrine differ from those in epinephrine?

The differences in the action/indication is because of differential affinity of the two molecules to different adrenergic receptors. The wikipedia page on Ardenergic receptor has a table which summarizes this.

Wikipedia doesn't cite references for it. You may have a look at some of the following old articles. 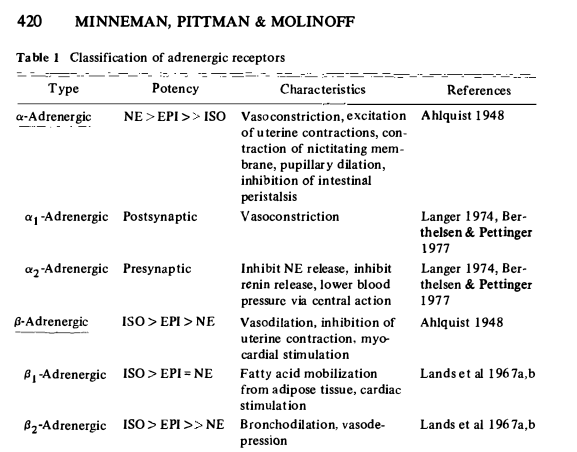 Not the answer you're looking for? Browse other questions tagged pharmacology autonomic-nervous-system or ask your own question.

1
Epinephrine vs. Adrenaline
0
Parallel Autonomic regulation of Cough and Runny Nose
1
Can Serous inflammation on pleura pulmonalis cause dry cough and runny nouse?
2
Is Norepinephrine beta2 adrenomimetic?
0
Salbutamol's Pathways of Interaction and Classification
5
Are the sympathetic and parasympathetic nervous systems exact opposites?