How does the eye know whether to focus further out or nearer in order to bring a blurry object into focus?

If the eye sees an object, but the object is out of focus, the eye could be focusing too near or too far. How does the eye (or the brain) distinguish one situation from the other? How does it know whether to focus closer or further?

Does the eye try focusing either a little nearer or further and then if that doesn't help to make the object clearer then the eye focuses in the opposite direction?

Or is there some light-sensitive apparatus that is always a focused a little nearer or further than the rest of the eye, and so for instance if the cells which are focused further out are giving a clearer picture than the other cells then the eye knows to focus further out?

Or is there some other mechanism altogether?

Interesting question! Determining the focus of a visual image is carried out in the visual association area of the brain. Ultimately, this process results in focusing of the retinal image by adjustment of the shape of the lens in the eye. Lens shaping to focus the image is called accommodation

The neuronal circuitry involved in accommodation includes the following structures:

The input to the accommodation response is provided by the retina, optic nerve, thalamus, and visual cortex. The visual cortex projects to the association cortex.

The (simplified) output scheme is the following: The association cortex projects to the supraoculomotor nuclei, which in turn generates motor control signals that initiate the accommodation response. The signal is then sent bilaterally to the oculomotor complex, and hence input from one eye is enough to focus both eyes.

As to the second part of your question: how out-of-focus images are functionally recognized:

There are at least three mechanisms responsible for accommodation:

2) Vergence / retinal disparity. This stimulus is generated when the eyes move both in opposite directions, i.e. when focus shifts toward objects closer or farther away. The temporary displacement on binocular retinal images is detected and leads to initiation of accommodation Fincham & Walton, 1977.

3). The near response: While 1) and 2) are retinotopic responses, the near-response is initiated by spatiotopic stimuli, including perceived depth and distance of objects, which are derived from cues such as relative size, overlap, perspective, shading and texture gradients as well as small timevarying dynamic depth cues which include motion parallax, loom and motion in depth. Dynamic cues provide time-varying references for perception of relative depth whereas static cues allow simultaneous comparison of separate absolute distances from which relative depth is perceived (Schor et al., 1991).

The neurology of vision is an extremely complex subject and is difficult to describe with any brevity, because there is so very much going on in so many parts of the brain. It is estimated that about 50% of the pathways of the brain, and about 30% of the cortex are involved in vision (where only 8% of the cortex is devoted to touch, and 3% to hearing). Some research estimates that eighty to eighty five percent of our perception, learning, cognition and activities are mediated through vision.1

The ability to accurately focus on an object, sustain that focus, and to change focusing when looking at different distances is called accommodation. That happens with the pupil size, the lens shape, etc. but it doesn't tell us how the brain chooses on what to focus. The short answer is that it's much more than focusing like a camera lens. We have retinal areas that simultaneously pay attention to further and closer areas, light/dark, edges, and more, all going on at once. That and much more information carried to the brain is processed, and efferently focus is honed. It's even more complex when two eyes are involved.

There are so many aspects to sight that an enormous number of kinds of optical illusions exist. They are involuntary. That's why they're fun. In fact, if you weren't tricked, it would indicate a problem in part of your brain. Here's one that relies on processing contrast: 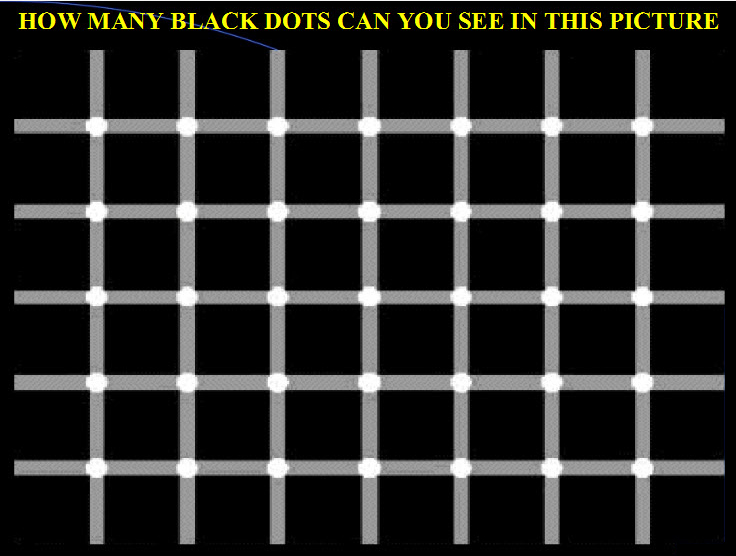 As you scan looking at the white dots, your peripheral vision seems to be able to see black dots, but it's clear on scanning them one row at a time that there are no black dots.

In the following illusion, the red vertical lines are parallel. 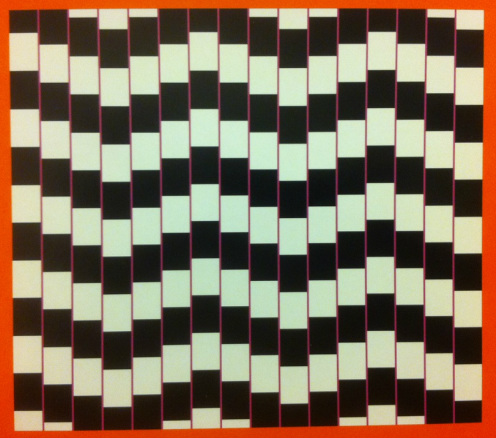 The following are summaries of the neuroanatomy of vision.

Eye, Brain and Vision
Anatomy and physiology of the afferent visual system

1 Vision Is Our Dominant Sense

Not the answer you're looking for? Browse other questions tagged eyes vision human-eye or ask your own question.

13
Why can't ciliary muscles in the human eye relax like other muscles?
13
What's the minimum distance of focus for the lens of a human eye to reach maximum flatness?
5
What is the focus distance of a 3D screen?
2
What is the difference between myopia and hyperopia?
2
Relaxing Eyes when using Virtual-Reality-Glasses?