Is there such thing as Animal non-verbal body language?

Have there been any studies done on the animal use of their bodies to signal, communicate or express their emotions, particularly to members of other species (ex: humans)?

I've been observing a very intelligent indoor-outdoor cat who has been doing the same sideways stretching posture every day he met me. There has been a number of other postures that the cat has been using - tearing at a carpet with claws, or dragging himself against the carpet by using claws that I've repeatedly observed. 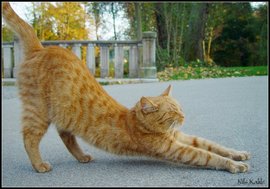 Another cat was thumping her head against a door to "knock" and indicate that the cat is outside.

To me, these gestures appeared as clear expressions of intent or emotional state.

Other experiment involved "trained" geese at a local pond who would indirectly approach humans to ask for food. Their body, neck and head position appear to indicate intent (is the animal grazing towards the human or away from the human).

Yet another experiment involves nesting birds who start to clearly express their displeasure at me located near their nesting area. They repeatedly produce high pitched screech until I move away.

For example I repeatedly see geese assume this gesture to intimidate other geese. 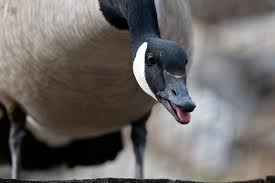 As a human, I'm very conditioned to vocal and eye related coordination, and this "non-verbal" language is fascinating to me.

Have there been any studies in how indoor/outdoor - partially domesticated animals communicate with humans?

Is it true that this communication uses their entire body and not just the vocal cords?

Is there some "foundation" language that would be similar among members of the same species, or is it entirely a learned skill that has nothing to do with evolutionary adaptation?

Finally, is there some sort of a brain complexity cut off at which level the animals can no longer understand if they are being communicated with?

The closest reason that I know of for such behaviour is simple conditioning!

B. F. Skinner conducted some fairly famous experiments with pigeons, where he put hungry pigeons in cages, and randomly administered the food. The pigeons associated the foods arrival with whatever they happened to be doing at the time (be it looking to the right, or bobbing their heads). They would then keep trying this until more food came out (randomly), and the pigeons 'superstition' was confirmed. See the wiki.

I realize this is not concrete, but it seems to me that they are not 'communicating' as such, they are simply repeating what has worked before. It is your anthropomorphication that has meant this seems like deliberate communication in my opinion. Although I'm sure it could be argued that all communication is having been 'conditioned' to use words/gestures to get your meaning across.

Just read the abstract for this paper (published yesterday) that finds that experts in dog behaviour can interpret the ('socially relevant') posture of a dog in a similar way to that of a human. We can therefore interpret the body language of an animal (in this case, dog), if we are familiar (you do not even have to have owned a dog necessarily) with the kinds of postures adopted. So the dog does not have to consciously 'communicate' for us to interpret their emotional state (happy/sad/angry/...).

In terms of human-pet communication then, there seems to be more emphasis on the human interpretation of the natural postures adopted by animals, than the animals themselves. Pets may behave very differently to animals in the wild, but it comes back to what the specific human is used to. If you have had a lot of contact with pet dogs you are in a better position to associate the current behaviour of a pet dog with the correct emotional state. No doubt the animal with subconsciously adjust their behaviour to achieve the 'correct' human interpretation, and thus get fed, or whatever.

Darwin wrote a classical book on the subject, The Expression of the Emotions in Man and [other] Animals. Among other things, he showed how opposite emotions cause opposite movements. For instance, when angry/about to attack, a dog will lower its tail, erect the hair close to the neck, move the ears back, etc. The ears back serve the purpose of protecting the ears from an adversary bite, the hair erected serve the purpose of scaring the adversary, making the animal look bigger than it really is. When happy/pleased, all signs are in the opposite direction: a dog will raise its tail, lower the hair close to the neck, move the ears to the front, etc.

Anolis and other lizards are also known for communicating visually. Anolis repeatedly extend and retract their colorful dewlaps in order to send messages to other members of the same species.

Apis bees, one of the most studied organisms, makes its famous waggle dance, where the distance, inclination and waggle intensity is proportional to the distance, direction and abundance of the food source informed to the other bees in the hive.

Some behaviors may be cultural, i.e., learned by an animal and passed through generations in its population. There's a great book on the subject, The Evolution of Culture in Animals, by John Tyler Bonner.

I think it was Jane Goodall, the woman who spent decades among the chimpanzees in Gombe, Tanzania, who told the story of a female chimpanzee who learned human sign language (not sure if that's on her marvelous book Through a Window). Not only she was able to create new words mixing what she already knew, but she also taught the language to her child, without the researchers telling her to do it.

So yes, there are LOTS of animal non-verbal body language, both innate and learned.

Talking about verbal language, I remember the two great groups of passerine birds: Oscines (or "Passeri") and Suboscines (or "Tyranni"). In the first, singing ability is mostly learned, while it seems to be mostly innate in the second. Here are some references.

Animals most definitely can communicate through body language! It sounds like you have a good idea of some methods through which they communicate easily noticeable to humans. To give you an interesting example I've been looking at recently is the idea of 'vigilance' in wild species such as impala, elephants and giraffe.

Mammals and birds are known to reduce the risk of predation by actively modifying behaviour to spend less time in vulnerable states that permit capture (Powell, 1974). The ‘group size effect’ is a well-documented phenomenon, whereby species in groups experience an improved predator detection rate, despite individually scanning less. This is more efficient as it allows more time for activities such as foraging and mating.

The problem here I've been looking at is how animals tell others in their groups whether a predator is approaching. So far from reading literature the key seems to be less with vocal cues, and more with 'posture' of the organism. Thus, the 'posture' of an animal in a group is a key way of communicating whether danger is approaching and the group members will respond appropriately.

It is important to remember is, like humans, few animals rely on one sense to communicate. This makes sense as certain conditions - such at night or when located far from others in the groups - they may still need to express information to others. These behaviour are largely innate (as far as I know), so they are not learned but rather 'automatically' engage in them.

I know this doesn't answer all your question but I hope it gives a bit of insight into communication in wild animals.

Not the answer you're looking for? Browse other questions tagged zoology adaptation language communication or ask your own question.

2
Is there an instinct-driven body language for birds?