What percent of the population has some form of synesthesia?

Data I am trying to get my hands on:

It would also be great if there's geographical (genealogical) data on what types of synesthesia are more common to what areas.

What percent of the population has what type of synesthesia?

Synesthesia is a neurological phenomenon in which a stimulus in one sensory or cognitive pathway triggers an experience in another. Some hallmarks:1

The best paper I found on the issue is by Simner et al, 2006.2 The authors first review prior literature on the topic and then describe their own methodology and study addressing the question of prevalence. Regarding prior research:

They point out some problems with prior studies: one group of surveys relied on self-referral and made the (conservative) assumption that all non-responders to an invitation to participate were non-synesthetes. Another set of studies avoided this problem by questioning every member of a participant pool but established the prevalence only “subjectively” (their wording, although I note that this is an inherently subjective phenomenon!).

Simner's own group used a validated survey questionnaire about specific synesthetic experiences (the specificity and prior validation of this overcoming the "subjective" aspect in their view). They found an overall prevalence of 4.4% for any type of synesthesia. Importantly, the male: female ratio was not significantly different from 1 in this group, in contrast to many prior studies which have found a marked female predominance, ranging from 2:1 to 5:1 (references in Simner's paper for those interested).

To address your question about the types of sensory experience involved, I turn to a more recent review article1 that compiled results from multiple studies. In this report, grapheme-color type synesthesia was most common (86%). These participants see a number or letter and experience a particular color in association. This was followed by followed by time-space type (62%), a group who associates units of time with a particular space relative to their body. The third most common was music-color type (41%), which is fairly straightforward. The majority experienced more than one type (clearly, given the percentages).

Here is a graph showing the percentage of the cohort who reported particular synesthetic experiences, grouped according to the category of inducer: 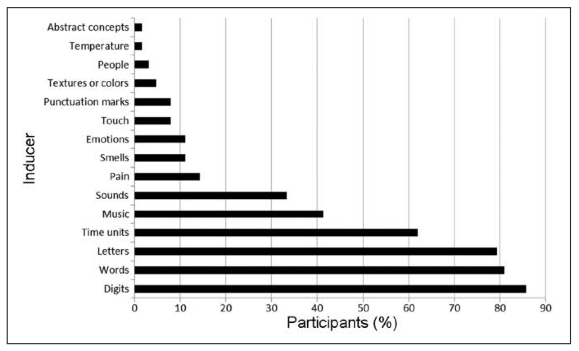 Note that the most common type mentioned above, grapheme-color, includes all three of the first categories - "digits," "letters," and "words" on this graph. Although only the inducers are listed here, the most common associated perceptions were indeed color (97%), followed by spatial configurations (62%). In most cases the color was static (73%) but in some people it moved in a specific direction (16%).

Not the answer you're looking for? Browse other questions tagged neuroscience sensation epidemiology synesthesia or ask your own question.

26
How is duration of efficacy estimated for vaccines?
7
Understanding Membrane / Resting Potential from the perspective of ions?
2
Evolution, self organization and neuroscience
2
Why we shiver/tremble/shake while performing some work which requires high accuracy?
1
Why do we perceive colour? (i.e., distinct values?)
6
Is synesthesia caused by crossing the circuitry of different sensory inputs?
24
Why does my room suddenly look 'reddish'? My eyes seem to adapt to color
3
Visual receptive fields