Can an influenza virus carry other infectors with it?

This idea came to my mind when thinking about how many people become ill in many locations with similar symptoms (fever and rough cough) from Influenza.

There are of course different types of influenza virus.

Can Influenza A virus work as a vector for other upper respiratory infections? That is, much the same as the mosquito being a vector of malaria, can an influenza virus carry other infections with it?

If so, how? If not, why do some people get so sick from viral influenza, and not others?

I wouldn't call influenza a vector here, but yes, an infection with the flu virus which results in a full infection can have secondary infections as complications. There are often caused by bacteria which usually live in the respiratory pathway and kept under control by the immune system.

This includes pneumonia (either viral or bacterial), inflammation of muscles and the heart muscle (myositis and myocarditis) as well as pericarditis. Less severe complications include infections like ear infections and sinusitis.

See the references for more details:

A vector transmits a disease or parasite from one animal or plant to another. Fruit bats are vectors for Ebola. They are a host to the virus, which can then be passed on to humans.

Influenza A, the virus responsible for human seasonal epidemics, is not a vector for other pathogens, although co-infection with two different strains of influenza can give rise to progeny viruses with mixtures of genes derived from the parental strains. If anything, that would make humans, other mammals and birds the vectors for Influenza A.[1]

Influenza A doesn't carry plasmids, and it does not insert it's genes into cell DNA as does a retrovirus.

The most frequent serious complications of influenza are pulmonary and fall into 4 categories or groups:

Typically, the first group is smaller than the second (except for Avian Influenza A). No additional infection is necessary in this group to cause pneumonia or death.[2]

In the second (and largest) group, typically viral influenza infection is followed by near resolution of symptoms, subsequently complicated 4 to 14 days later by a recurrence of fever, dyspnea, productive cough, and pulmonary consolidation. Common pathogens are S. pneumoniae, S. aureus (methicillin-sensitive [MSSA] or methicillin-resistant [MSSA]), S. pyogenes, H. influenzae, and some others.

Pneumonia due to unusual pathogens or in immunocompromised hosts, and exacerbations of chronic pulmonary diseases are less common than the second group but carry a high mortality.

The second reference is an exhaustive review which you might find quite helpful.

1 FluGenome: a web tool for genotyping influenza A virus
2 Complications of Viral Influenza
3 The co-pathogenesis of influenza viruses with bacteria in the lung

While a viral infection such as influenza can lead to secondary infections, it is inappropriate to call it a vector for those other infections. It is not the means by which those other infections are acquired. If a bacterial sinus infection follows upon a bout with the flu, that bacteria was not carried to the patient by the influenza virus. A single bacterium is immense compared to any virus. No, the bacteria most likely resided within the host before the infection, but it was under control. Or it might be introduced during the infection and find a foothold it would not have likely found in a healthy host. In a situation like this, the immune system is distracted and weakened enough to present an opportunity for this bacteria to grow out of control into an infection.

The bacteria in this scenario are a little bit like the annoying hordes of roofing contractors that recently swarmed my neighborhood after a hail storm. These guys are always around, looking for the occasional roof that might be getting old and need repair. But right after a hail storm, they find a lot more of the opportunities they are looking for. So suddenly they are all over the place. They didn't literally fall from the sky with the hail. But the hail presented the opportunity they needed to thrive.

Malaria is a microscopic germ which hitches a ride inside a comparably enormous mosquito to find it's way eventually into a human blood stream. An influenza virus is too small for anything infectious to hitch a ride inside it.

Contrarily to the main opinion expressed so far, I would say that, in theory, it is possible that an Influenza virus can be a vector for another virus.

Here is a paper about using influenza virus as vector for a variety of genes. The same method can be leveraged to engineer an Influenza virus particle that contains, for example, genes coming from another virus. Upon infection, the Influenza virus will infect the host cells with both genomes.

In this way you will end up with an Influenza virus that act as vector for another virus.

However, such a hybrid looks very unlikely to occur in nature.

But it can be certainly made in lab.

In bacteriophage, the viral capsules serve as vectors for other DNA so frequently that there is a common name for this: transduction. The image below, from the Wikipedia, illustrates the basic process. Here a phage, with pink DNA, accidentally packages up other DNA -- in this case, from the bacterium -- in one of the capsules and thereby serves as a vector for this DNA. 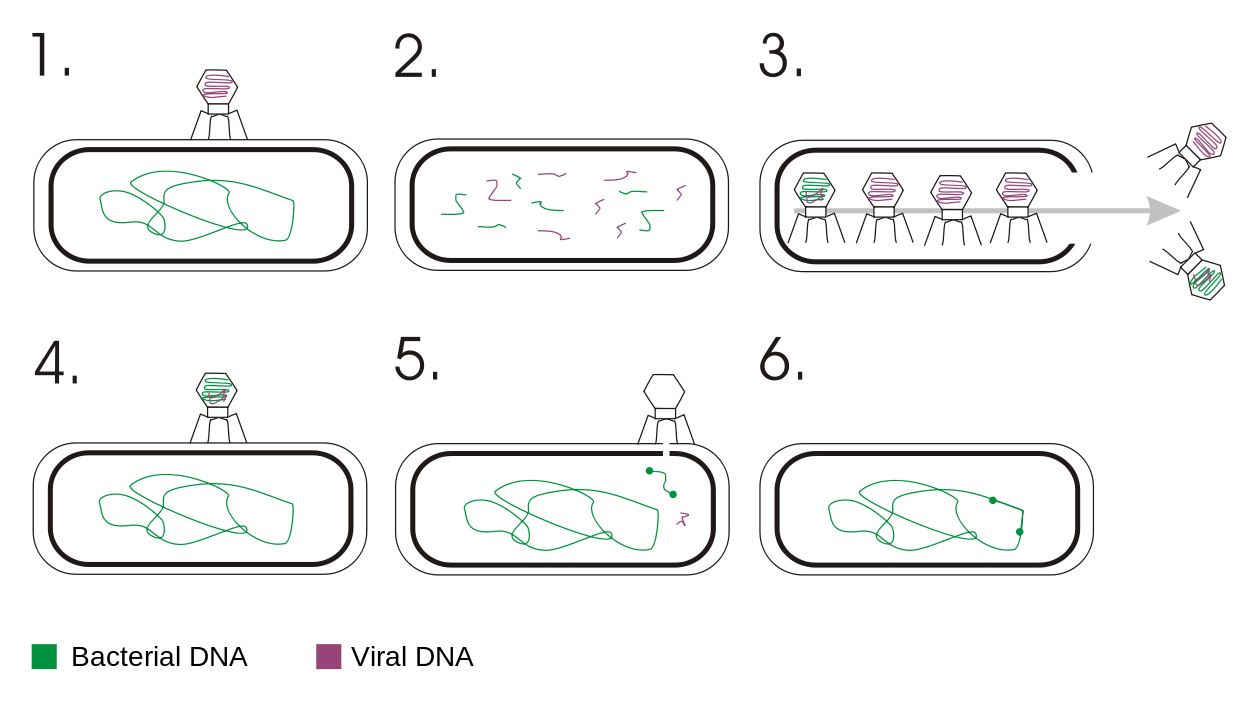 Something a bit like this happens any time we have recombinational assortment in the influenza virus. The influenza virus genome segmented, with 8 "chromosomes". When an individual is multiply infected with different strains, new combinations of the 8 chromosomes can be packaged up within an given viral particle. This process is often responsible for new epizootic strains.

In principle, genetic material from another virus could be packaged up accidentally into an influenza virus particle. If it happened to enter the right kind of cell, the influenza capsule could in that way act as a vector for the other virus's DNA. In practice, I would imagine that this would require remarkable coincidence and thus would be extremely uncommon in nature.

Not the answer you're looking for? Browse other questions tagged microbiology virology infection influenza or ask your own question.

4
Olympic's epidemiological impact on Zika?
5
For how long can influenza survive on a piece of paper?
0
How can I perform virus neutralization assay for influenza?
1
Do viruses compete with each other or even infect each other? (Virus vs Virus)
0
Difference between viral and native RNA
0
Can a virus infect a virus?