Are there dog breeds that are so far apart genetically that they can't produce viable offspring?

Obviously, a very large dog would have difficulties mating with a very small dog and vice versa. 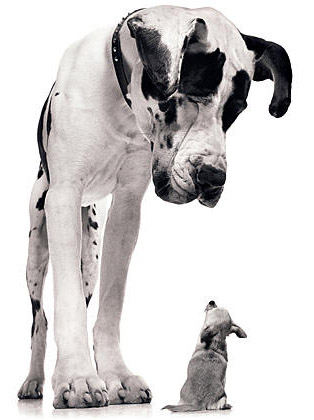 But putting that problem aside (using, say, insemination), considering the large variation of dog breeds, are there any two breeds that are so different genetically that they can't produce viable offspring together?

I actually found some sort of reference for this. Apparently in the case of a beagle and irish setter pairing, they had a lot of difficulty in producing pups, but as breeds have a lot of genetic quirks, this might be due to a genetic accident; this is probably a case of mutual infertility rather than speciation. There are probably mutations in their genomes which are causing non viability in the pups the way that it does with some human parents who have difficulty having children - an immunological incompatibility or traits which cause most offspring non-viable.

In fact the discussion points out that the species designation does not always mean they cannot produce offspring, but simply do not. Coyotes and wolves will produce offspring too if they are encouraged to do so, but are competing and antagonistic in the wild and so never do mate in practice.

So the answer is probably no. (the beagle/setter pups did show up, but with a much smaller litter than usual with just 2 pups).

Not the answer you're looking for? Browse other questions tagged genetics zoology dogs or ask your own question.

17
Can two humans with 44 chromosomes produce viable offspring?
18
Transitivity of Species Definitions
6
Why are hybrids infertile?
6
Are there any mutagens that can undo the mutations they cause?
3
Are there transposons which create homozygous genotypes in offspring?
3
How many possible human genotypes are there that produce distinct phenotypes?
0
Method of determining base values of traits in isolated populations