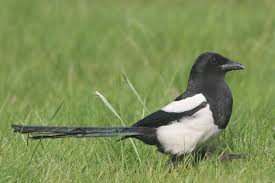 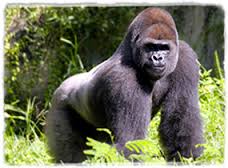 How could be the "Eurasian magpie" bird won the "Mirror Test" where Gorillas failed ?

In 1982, mirror tests on two, zoo-reared gorillas failed to demonstrate self-recognition. The authors wrote "[These studies]...suggest that the gorilla may be the only great ape which lacks the conceptual ability necessary for self-recognition." In 1993, a report was published that although six gorillas had previously failed to exhibit self-recognition.

The Eurasian magpie is the only bird to pass the mirror test. Researchers applied a small red, yellow or black sticker to the throat of five Eurasian magpies where they could be seen by the bird only by using a mirror. The birds were then given a mirror. The feel of the sticker on their throats did not seem to alarm the magpies, however, when the birds with colored stickers caught a glimpse of themselves in the mirror, they scratched at their throats - a clear indication that they recognized the image in the mirror as their own. Those that received a black sticker, invisible against the black neck feathers, did not react.

Birds lacks neocortex, the area where self-recognition was thought to reside. Then which part of the brain do birds like Magpies uses to process these complex cognition ? Why do Gorillas failed the mirror test ?

I think this website provides a pretty surprisingly thorough breakdown of avian brain anatomy, including historical contexts and debate around what exactly is homologous and what is not, and whether 'homologous' is a useful bit of information.

In short: It was thought until recently that the bird brain was just the core of the mammal brain with some layers peeled off, but it turns out to be more like a scale model, with many of the same parts. Roughly. Sort of.

So birds do not technically have a neocortex. They have a structure that looks like a neocortex, but it also looks like some other things. Gorillas do have a prefrontal cortex etc (even if they are smaller than in humans). The knowledge that structure X performs function Y in an organism generally implies little about a second organism, with or without structure X. Even features like 'wings are for flying' and 'fins are for swimming' have exceptions.

Not the answer you're looking for? Browse other questions tagged brain intelligence cognition or ask your own question.

2
How and where do nerves share pathways to the brain?