There is a dataset that contains body mass ($x$) and metabolic rate ($y$) from many different organisms. It is common to fit the data to the model of the form $y=ax^b$ and estimate the parameters $a$ and $b$ (see Kleiber's law and The Metabolic theory of ecology). In doing so, it is also common to log transform $y$ and $x$ and create the linear relationship log($y$)=log($a$)+$b$log($x$) and perform linear regression analysis based on the log transformed data. Is this approach better than directly estimating $a$ and $b$ based on nonlinear regression for $y=ax^b$ (because results are different)?

Short answer: The results of the two approaches (linear versus non-linear model) do not match because the relationship between body mass and basal metabolic rate does not strictly follow a power law.

It is indeed the case that if the relationship between two variables follows a power law the two approaches should provide comparable results, but important differences could arise due to Jensen's inequality. In order to test whether the reported differences between the two approaches are due to Jensen's inequality or to some biological factor I obtained data from Kolokotrones et al. (2010) who have in turn taken them from McNab (2008). Kolokotrones et al. (2010) investigated the issue of whether a power law is appropriate by performing linear regression on log-transformed data but they did not attempt to fit the data with non-linear regression. 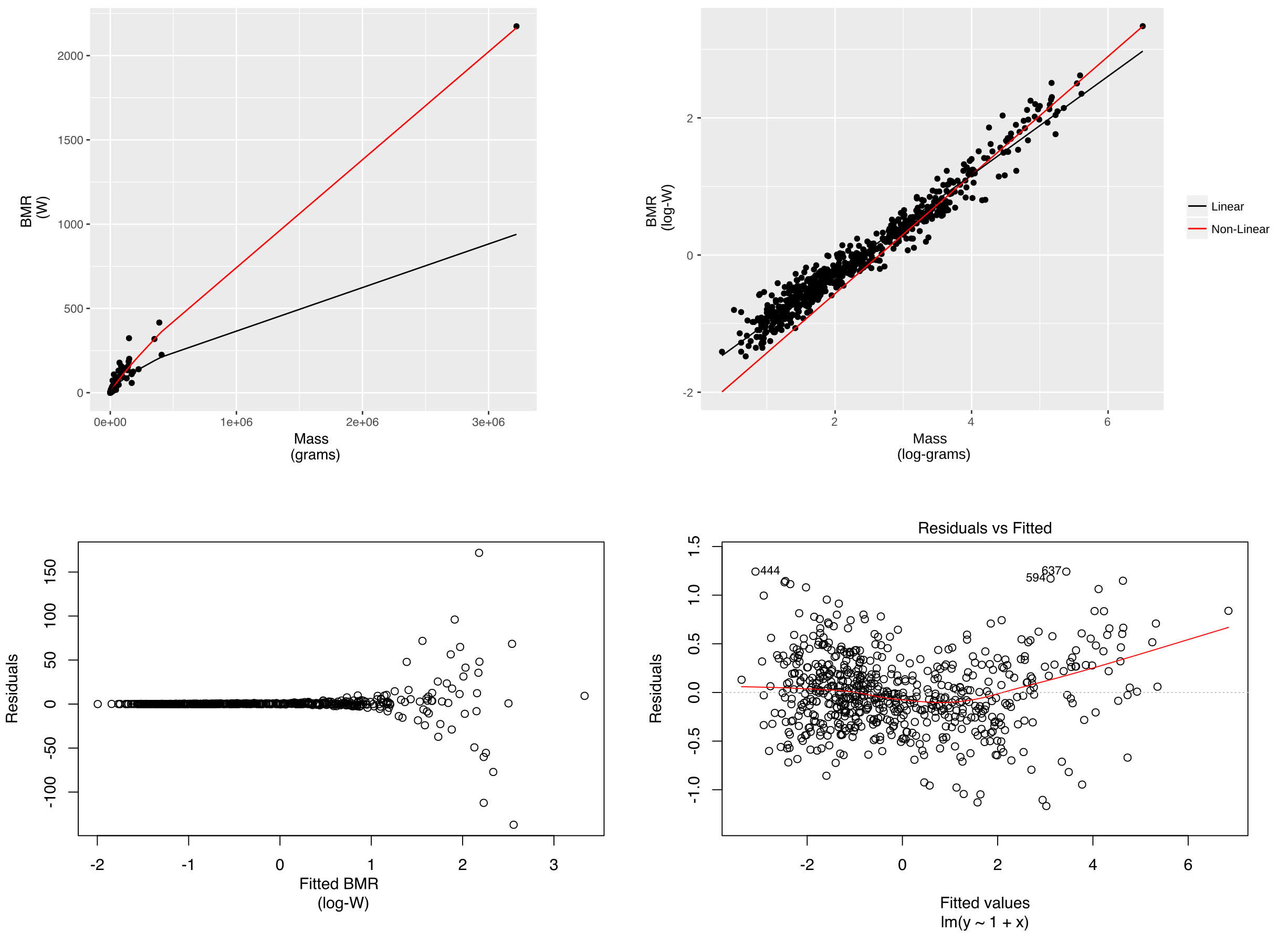 We can conclude that for this dataset the results of the linear model approach do not match those of the non-linear model approach because the data do not strictly follow a power law. Rather, the megafauna appears to follow a different trend compared to smaller animals. Kolokotrones et al. (2010) found that adjusting for temperature improved the linear fit, in addition to the inclusion of the quadratic term. The resulting model was:

The R code used to generate the results for this answer along with the data used can be found in the following git repository in GitLab: https://gitlab.com/vkehayas-public/metabolic_scaling

What will happen during log-conversion is that the large scale variation that happens in data points with high value will be compressed. This will actually produce an estimate that should be more robust toward outliers (because their deviation from the mean will be compressed).

If the data was perfectly modeled (i.e. no or few errors) then it should not matter.

With that said, I don't expect major differences between the two approaches.

Not the answer you're looking for? Browse other questions tagged metabolism statistics or ask your own question.

14
Do tall people have more cells?
9
What species is the smallest bird?

14
What is the difference between a mechanistic and a statistical predictive model?
2
Metabolic efficiency for fats and sugars
1
Do pregnancy and breast feeding increase basal metabolic rate?
4
What's the proper way to determine whether dose response curves +/- another variable (besides dose) are statistically different?