Is there any evolutionary advantage of selection of L-amino acid over D-amino acid?

After listening to a scientific talk, I had this question that why in the natural selection process, are the L-amino acids selected over the D- form. However, we still we produce D-amino acids; specifically in the brain there is a higher concentration of D- amino acids. One possible reason is that they act as neurotransmitters.

As you say yourself, biological molecules are usually available in both chiralic possibilities, yet nature uses only one of the two possibilities. At some point in our molecular evolution (and at a very early one) L-amino acids were stochastically "chosen" over their D-equivalents (I think that the choices would have been equiprobable). There is no reason why D-amino acids shouldn't work here as well.

There is some discussion on why L-amino acids are used, see the references for some ideas. It might be that the proteins made from it where slightly more stable or because they were more abundant. D-amino acids are in use today as a protective step - most proteases for example cannot hydrolyse the D-amino acids in the peptidoglycan wall of bacteria. Using this "unusual" amino acids gives some protection here.

The current thinking amongst biophysicists is that if we all woke up tomorrow to find that someone had edited the book of life so as to exchange all of the L-'s and D-'s (and made similar mirroring changes to all of the molecules that any protein interacts with), everything would be exactly the same.

Milton, et al. (Science, 1992) lent supporting empirical evidence to this view by carrying out the total chemical synthesis of a D-enzyme, D-HIV-1 protease. They showed that the L- and D- versions of the enzyme had identical and reciprocal activity, meaning that L-enzyme cut the L-substrate well and the D-substrate poorly, and vice-versa for the D-enzyme:

They also showed that the structures the L-enzyme and D-enzyme were mirror images of one another: 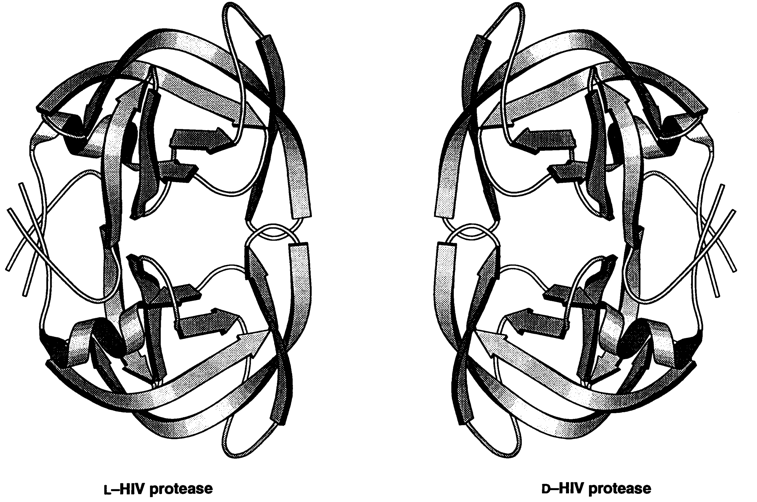 The preference for L- forms over D- emerged sometime early in evolutionary history, and there's a lot of speculation as to how the preference arose (it could have been cosmic rays!), but the evidence is thin.

This question is a matter of discussions, but I'd like to mention that there's basically two viewpoints. The first viewpoint is that the symmetry breaking is global (in other words, there's a reason why exactly L-amino acids; if there are other planets with Life, L-amino acids should be "used" on all of them or at least on the major number of them). The second viewpoint is that the symmetry breaking is local (or spontaneous; and hence Life outside Earth can "use" aminoacids of arbitrary sign).

The only global reason for global symmetry breaking known in physics is weak interaction. There were some efforts to connect weak interaction and symmetry breaking in biomolecules, starting from Vester-Ulbricht hypothesis, but it seems that there's no confirmed mechanism of this connection. You may read this review which may be outdated (2000) but at least it can give you an idea about what kinds of mechanisms were tested.

The science around the local symmetry breaking is much more rich but works like Sutherland's (Powner, Gerland, Sutherland, «Nature», 2009, 459, 239—242, doi:10.1038/nature08013) are about the mechanism of possible local symmetry breaking, and the question "why L?" is meaningless in frames of this view (or in other words answer is "it was just a random choise"; in fact, it is not even concluded if this "choise" was made on a chemical level or during biological evolution).

PS By the way, more recent papers (1, 2) suggest there's some progress in the field.

Not the answer you're looking for? Browse other questions tagged evolution amino-acids chirality or ask your own question.

6
Are there any effects of elevated Cysteine levels on cognitive function?
1
Is there any evolutionary/physiological advantage to multi-lateral symmetry?
2
Effect of zero selection (pressure) on the population health
4
Is there selection against long proteins and long genes?
9
why has evolution favored sexual reproduction using two mates over sexual reproduction using three mates?
4
Is natural selection a tautology, and therefore not truly falsifiable?
12
What is the definition of “Natural Selection”?
0
Are Males the main evolutionary tool for production of genetic variation necessary for evolution?
2
Is DNA from more parents (than two) better for the fitness of the offspring?