Can the eye distinguish between pure and composite colours and how do we measure this?

Suppose I shone a pure red light, say 650nm, onto the same spot as a pure green light, say 550nm. The eye sees this two-peak spectrum as yellow.

This presumably means we are tricking the eye, since a pure yellow light source would also be perceived as yellow.

Do the cells on our retina treat composite spectra equivalently to corresponding single-peak spectra? If not, how do we quantify the gap?

Yes, we do perceive a composite spectrum in a way which is analogous to how we perceive the corresponding single-peak spectrum. Human beings have trichromatic vision, meaning that there are 3 types of specialized cells in our eyes for seeing color. Each one has a different color of light which produces peak stimulus, although they all perceive a range of colors: 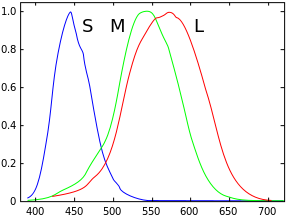 (the axes are wavelength and normalized response)

None of the color-sensing cells has a peak color of yellow. In order to perceive something as being yellow it either has to be pure yellow or stimulate the 3 types of color sensing cells in a very similar way as pure yellow would. However, if you took very careful readings of the output signals from the color sensing cells you might see some subtle differences in the exact waveforms of the responses.

What tel explained is correct. I wanted to add that we actually see pure light in a composite way too.

Note for example that the M receptor has a peak at around 550nm, and a symmetric response curve. So, if you shine a 540nm light, the response of the M cone is the same as the response at 560nm. So, how do we know that it's a cool, bluish green and not a warm, yellowish green? By the response of the other cones. The ganglion cells in the retina combine the response of several cones to represent the wavelength of the light perceived by the photoreceptors (as well as some other attributes of the image within their receptive field).

As for "tricking" the eye, we're doing it all the time. Higher levels of visual processing will interpret colors depending on everything else perceived in the picture, such as light intensity, texture, and even cultural knowledge about colors. A mostly unbiased representation of wavelengths is only present at very early stages of visual processing.

16
What is the difference between a circular and a cat's-eye (slit) pupil?
2
The Eye, and Camera Lenses
6
Can the human eye distinguish colors in the periphery?
11
Can “red” cone cells actually see much red light?
2
Is chromatic aberration related to the spectral sensitivity of the human eye and can it cause “relative myopia” and “relative farsightedness”?