Evolutionary chronology - if any, which species have evolved in the last 100 years

I heared somewhere, I cannot remember where, that there has not been an evolution observed in our lifetime. In life science class, right at the start, we was doing the usual MRSGREN (how to tell if something is a living organism), and the tutor said that you can also tell something is a living organism if it evolves. So I asked if there has been an observed evolution in our lifetime. She said that there had been many but could not recite any off the top of her head, so the next week she handed me a piece of paper with 8 or so websites that aparrently corroborated her claim. I have not got the paper anymore but I recall there been on there the peppered moth or something. So I set out to look for a chronological list of evolution but could not find an authoritative one. I could only find something on wikipedia that indicated that species have been dying out for the past thousand years, but nothing saying that any have evolved.

Every single species in existence has "evolved" over the past 100 years. Evolution is a constant process. You are asking whether we can observe evolutionary change in a given species over a short time span, not whether evolution is occurring. I know this sounds like pedantry but it is a very important distinction.

That said, yes, of course we've seen evolution in action in short time spans. The classic example is the various bacterial species that have developed resistance to antibiotics. As very nicely illustrated by Garry Trudeau: 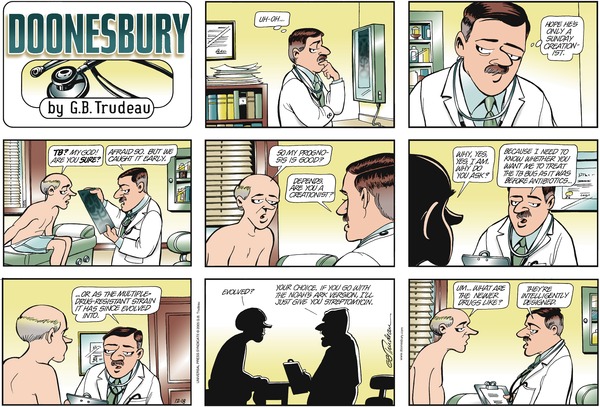 If you want more rigorous evidence than a comic strip, have a look at Wikipedia's page on antibiotic resistance or read Demerec, 1948(1).

Another example is described by Yona et al.(2) who show that subjecting yeast to high temperatures (heat stress) for a few generations causes genetic changes that help the cells deal with the stress. This is, clearly, evolution in action. In fact, they even show that the first response is the duplication of an entire chromosome (think of it as a crude, bludgeon-like solution) which is later suppressed by other, more subtle, compensatory mechanisms which arise to replace it.

As Peteris claimed, we cannot witness the complete evolution of a specie in our life time. Our life, being a frozen moment in the eternal journey of evolution, not always gives us the pleasure to completely understand the process of evolution(also the purposes). But we can witness some minute details, which we can consider as the sub sets of a complete evolution. By evolution, most people think of the complete development from one specie to another, but this kind of evolution to develop a completely different specie will take a millions of years. So we could conclude that those kind of evolutions cannot be witnessed in our life time.

But there are those evolutions which are more dramatic and came into existence within a period of some decades, so considering these minor evolutions(or we can call it variations) we have a couple of cases were some species develop,

Reappearence of tougher bedbugs that are harder to kill

Entomologist Dini Miller of Virginia Tech says bedbugs probably developed thicker, denser, waxlike exoskeletons, also called cuticles, that repel chemicals in pesticides. To test the hypothesis, her group is comparing cuticle-coding genes in both insecticide-resistant and susceptible bedbugs, as well as measuring their cuticle thickness and hydrocarbon content, which indicates how much wax is present. Reference

Evolution of Microgadus tomcod After General Electric dumped polychlorinated biphenyls (PCBs) in the Hudson River from 1947 through 1976, tomcod living in the river were found to have evolved an increased resistance to the compound's toxic effects.1 Scientists identified the genetic mutation that conferred the resistance, and found that the mutated form was present in 99 percent of the tomcods in the river, compared to fewer than 10 percent of the tomcods from other waters. Reference

Lizards are Evolving to be Dancers

Take the southeast fence lizard, for example. When fire ants were accidentally introduced to the States about 70 years ago, the fence lizard found itself defenseless against them. The ants had no natural enemies, and it only took 12 of them to take a lizard down in about a minute. Seventy years later, the lizards that live closest to the port where the ants were first introduced have evolved an unlikely strategy for dealing with their antagonists. How unlikely? Well, there's a dance involved, which makes these animals the first on record to employ the West Side Story method of self-defense.

While other lizards respond to ant attacks by "sitting still, just hoping the ants would go away," these smooth operators developed an ant-shaking shimmy that they've passed on to their kids. And those kids have longer legs for quicker get-aways. Just so we're clear: Nature, not weird daddy issues, has created leggy lizards that thwart attackers through shaking what their mommas gave them. Reference

Lizards are Rewiring Their Own Guts, Right Now In 1971, scientists introduced 10 Italian wall lizards to an island in Croatia, but right after they dropped them off, the Croatian War for Independence prevented the researchers from following up on their little lizard guinea pigs. In fact, the scientists couldn't get back to the island until 2004. When they did, they found 5,000 lizard descendants who had not only annihilated the entire indigenous lizard population, but also rewired the shape of their own innards to accommodate the local diet.

Before their introduction to the island, the wall lizards were carnivores, so their digestive systems weren't built for leaf-eating. But on an island short on insects and long on plants, a strictly carnivorous stomach would be a one-way ticket to Deadville. So the lizards developed things called cecal valves, which were muscles that slowed down the process of food digestion and gave them more time to break down plant cellulose. But growing new gut muscles wasn't all the lizards had up their sleeves. They also grew bigger heads for stronger bites, and dropped territorial defenses. Reference

Evolution is an aggregation of all these combined traits and mostly evolution is accelerated when the species are geographically separated, time is a crucial factor with evolution. We are unlucky to witness a complete evolution in our neighborhood, but all these accumulating traits which change a specie to adapt with a diverse environment is a powerful evidence towards evolution and its working.

By definition, we shouldn't expect to observe within our lifetimes the evolution of any species with a generational cycle comparable to our lifetime (mammals and such) since species differentiation requires a multitude of generations.

The directly observed evolution thus is limited to short lived organisms such as bacteria, viruses, plants or insects, with an emphasis on the first two.

It is possible to directly observe evolution in an experimental laboratory setting by taking a strain of bacteria that doesn't possess a certain capability (e.g. resistance to some chemical compound), periodically introducing this compound and accelerating the mutation rate by e.g. radiation, observing the formation of a new species of bacteria that is able to resist this chemical.

0
What (if any) is the shortest evolutionary process observed by humans?

16
How did the first self replicating organism come into existence?
22
Why would a single celled organism evolve to be multi-celled?
3
Is there any evidence of increased life expectancy for animal species?
6
Phylogenetics and the Tree of Life
1
Which organism can point us to the evolution of sight?
0
If sexuality is genetic, how did asexuality evolve?
0
What were the three dinosaur evolutions and do they imply that bipedalism could have evolved multiple times in hominins?