Why don't we see turbulence in the aorta even in normal situations?

I read about the Windkessel effect. Then I read about pulse pressure waves getting reflected from the periphery. If the pulse pressure wave is reflected during diastole and at the same time blood is being pumped forward by the aorta due to the Windkessel effect, then we have two opposite forces acting which should create turbulence even in a normal aorta. Why doesn't this happen?

Why don't we see turbulance in Aorta even in normal situations?

There are different parts of aorta where turbulence is possible and where not.

It is often said that in normal situations, we cannot see turbulence in aorta because aorta is very stiff and its surface is very smooth. However, this is a simplification and involves an average person (middle aged) which has stiff aortic arch too.

Note that the elasticity of arcus aortae is responsible for 50% of the volume to the peripheral circulation, thus creating a nearly continuous peripheral blood flow as anongoodnurse says, see this publication. However, not all of this blood travel to the backward direction. It would be interesting to see how much blood is travelling backward. This would help to understand what is the likely hood for turbulences.

Those models linked by Anongoodnurse's answer are a few models used to locate places of possible turbulences discretely but they do not seem to consider the amount of blood capable of creating turbulences, just discrete models:

In summary, there are many models and publications to answer the question where are the turbulences. However, they try to answer nonlinear problem by linear models. I have not seen any models where they do this rigorously. I think we should narrow this problem even more, like Fukuda et al has done. They manage to provide some good pieces of information by just considering an intervention with least turbulence in the aorta.

Generally speaking, we can see some turbulence in arcus aortae in the diastole when blood bounces back from the aortic valve. The walls of arcus aortae can store about 50% of left ventricular volume. However, I do not know how much of this blood is travelling backward and reflecting back from the atrial valve and causing possibility for turbulences.

Pulse pressure is systolic minus diastolic pressure. Pulse wave is those small waves inside respiratory waves: 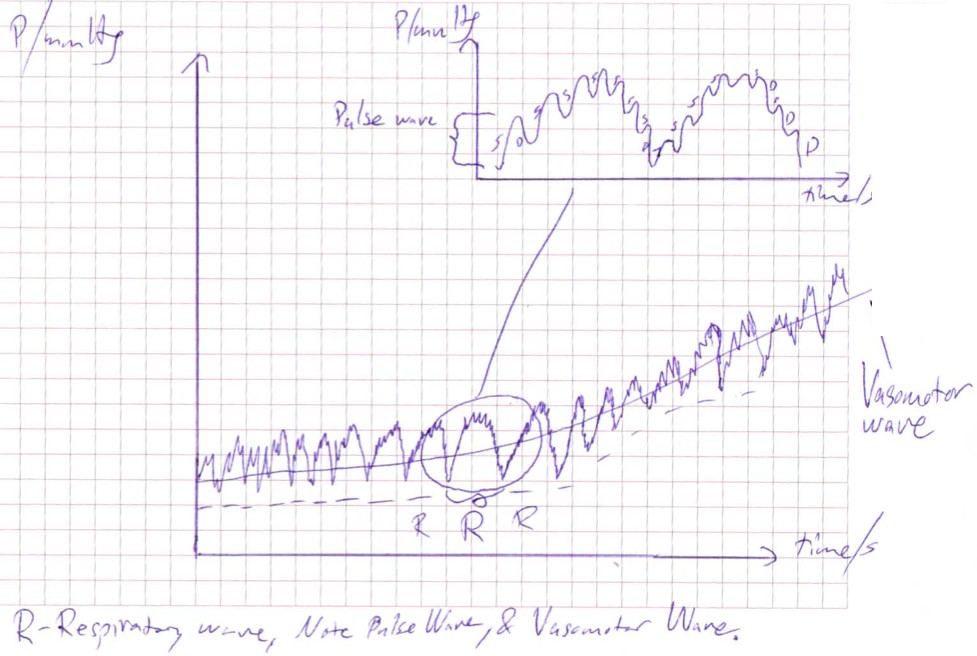 where vasomotor waves are controlling the big picture.

If the pulse pressure wave is reflected during diastole and at the same time blood is being pumped forward by aorta - -.

Wrong! Blood is pumped by heart. Aorta is just a vessel for transportation. Generally speaking, Some blood is reflected back from arcus aortae which bounches back from the aortic valve.

[Because] windkessel effect then we have two opposite forces acting which should create turbulance even in normal aorta. Why doesn't this happen?

Generally speaking. Arcus aortae stretches during systole. It is coils back in diastole (left atrium relaxing), blood crashing off aortic valve, possibly creating a heart sound and increasing diastolic pressure. Like anongoodnurse says, in this phase, you can see some turbulence in the aorta but little, since the wall of the aorta is very smooth and only small portion of blood is travelling backward from the walls of aorta: 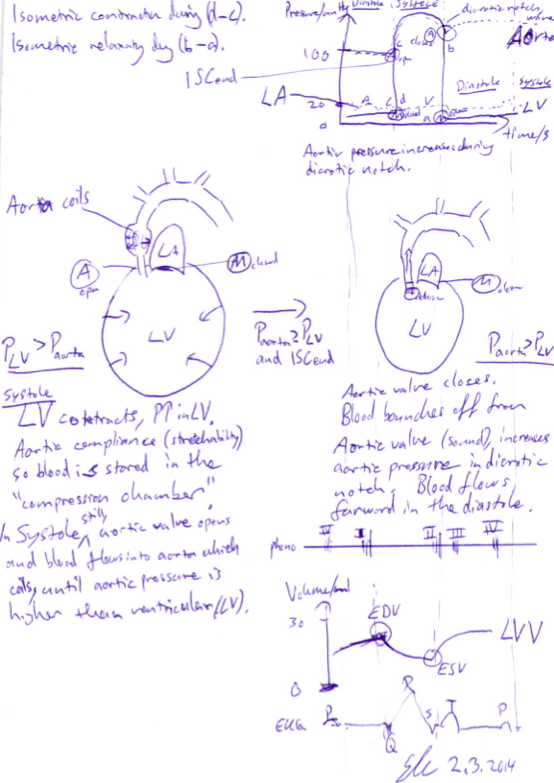 where see the aorta coils part.

There is turbulence in the normal aorta, which is thought to be one mechanism of endothelial injury leading to atherosclerosis and thrombus formation.

Blood Flow in the Healthy Aorta: Turbulent or not?
Flow velocity and turbulence in the transverse aorta of a proximally directed aortic cannula: hydrodynamic study in a transparent model
WALL SHEAR STRESS IN A SUBJECT SPECIFIC HUMAN AORTA - INFLUENCE OF FLUID-STRUCTURE INTERACTION

1
Why is Aorta sometimes called Compression chamber?
3
Why does the arch of aorta coils?
21
Why does the face turn pale in dangerous situations?
2
Is blood pressure in the aorta and brachial artery the same or different?
2
How do painkillers prevent shock?
2
Can the human eye axial length decrease?
0
Osmotic pressure and turgor pressure details