What is an operon?

What is an operon in a eukaryotic cell, and how does it regulate the expression of genes? I've already read Wikipedia, but it is not enough clear to me. Unfortunately my knowledge in genetics are very poor!

Operons were once thought to appear only in prokaryotes (and viruses of prokaryotes), but there are now known to be a number examples in eukaryotic organisms. These are mostly seen in nematodes and insects.

Generally an operon is a functional DNA unit which contains a cluster of genes which are regulated by one promoter/repressor element and which are transcribed together. These are genes which functionally work together in a close context. A good example for this is the lac operon in bacteria.

In prokaryotes the expression of the operon leads to polycistronic (multiple open reading frames on the same transcript) mRNA, which is then translated into proteins.

Operons in eukaryotes are also gene clusters (often of functional closely related proteins), which are regulated by one regulatory unit (promoter). See figure 1 from reference 1: 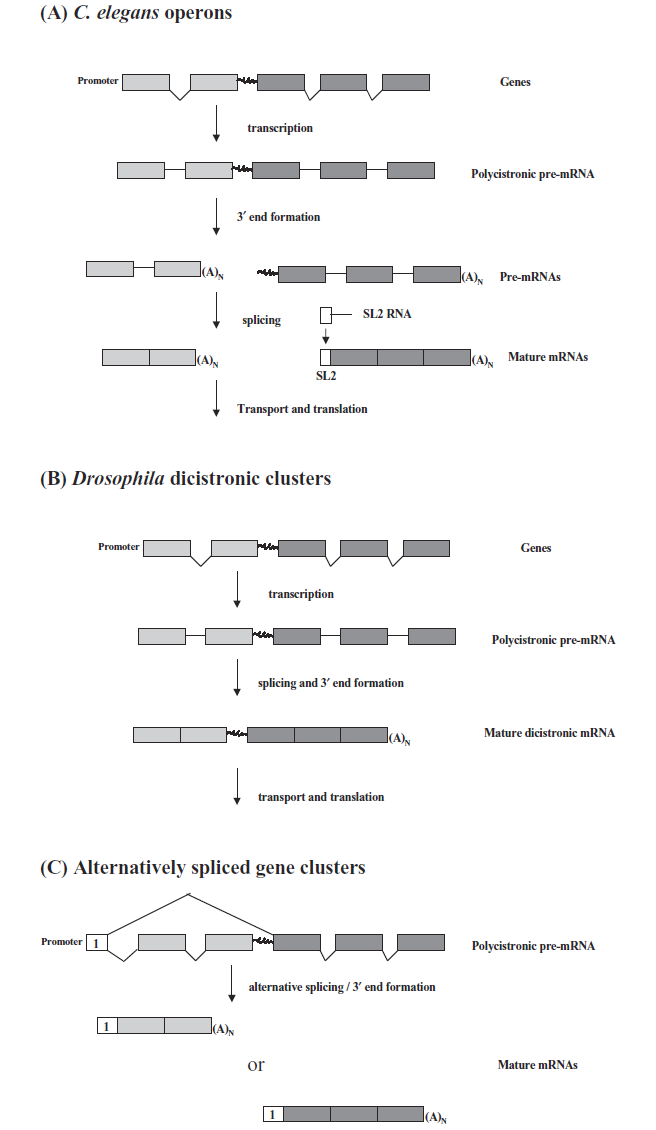 There are different ways of mRNA arising from this phenomenon. First the mRNA can be dicistronic and most likely has internal ribosome entry sites (IRES) which allows the initiation (or re-initiation) of the translation of the second gene. Another possibility is the cleavage of the primary mRNA strand into two (or more) monocistronic mRNAs. And finally it is also possible that the dicistronic transcript is alternatively spliced to get different (monocistronic) mRNAs.

If you are interested in the details of eukaryotic operons, I strongly recommend reading at least the first reference (and probably also following up some of the related citations (on the right on the NIH website)).

Not the answer you're looking for? Browse other questions tagged genetics cell-biology operons or ask your own question.

0
What are the constraints on an operon?

3
How might gene clusters like the lac operon evolve?
2
What is the mechanism of regulation of PER /CRY genes?
0
What is the significance of and biological mechanisms demonstrated in lac operon?
1
Are the genes for transcriptional factors close to their targets in the genome?
0
Are the subordinate genes of a repressed operon really "turned off"?
1
Is induction and derepression the same thing?
1
Problem in understanding Operon
2
What are housekeeping and constitutive genes?
0
How do cis-regulatory elements and trans-regulatory elements behave differently?
0
What are the constraints on an operon?