Are There Rules for How Proteins Are Formed?

What I would like to know is if there are any rules or principles which determine how amino acids are strung together to form proteins? If so, what are those rules and can anyone recommend any resources where I can learn more about this subject?

Let me try and explain what I am trying to ask. I understand that there are rules of grammar that I need to follow in order to put together a well formed English sentence. I am wondering if there is something akin to that for stringing together amino acids in order to create a 'well-formed' protein. (I am NOT referring to how DNA codes for amino acids).

For instance, imagine that I wanted to create a new protein and I had a pile of amino acids at my disposal. It seems to me that if I understood the principles and rules by which amino acid chains work then I could know which amino acids to string together and the order in which to string them together in order to create the particular type of protein that I wish to create.

This is similar to how I can string together letters and words to form well formed sentences or how I can string together well-formed sentences to create logical arguments. There's a logic to how to form a sentence and a different logic for how to form an argument -- and it is possible to discern that logic by studying syntax and reasonable arguments.

I assume the same is true for proteins. There must be some sort of logic or system for how amino acids are strung together -- some sort of connection between the 3-dimension, functional protein and the nature of the properties of the individual amino acids and how they are organized together. What I am wondering is whether or not we have any idea what that system of logic is.

It sounds like your question is "what are the rules to protein folding?"

That's not the only way to read your question.

Protein Folding is a unique problem - a 1D sequence maps to a 3D object. Since proteins mediate nearly all biochemical transformations and therefore mediate life's processes, protein folding one of the great unsolved problems in science today.

You can see in the example folded structure above there are helices and flat sheets of connected strands. You can see below in the schematic alpha beta barrel motif of triose phosphate isomerase (TIM) how elegant these structures can be. 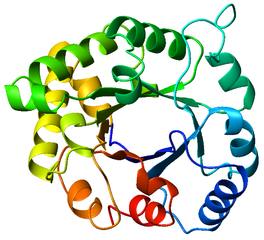 Although the combinations and overall organization of the beta sheets and the alpha helices are boundless, there are some unifying motifs in these structures.

Long ago, a couple of researchers tabulated the amino acids probability of being in alpha helices or beta strands. The Chou-Fasman model is important in that it has approximately ~70% chance of detecting alpha helices and beta strands. Its not a great accuracy but what's really amazing about these algorithms is that they show that local forces - the interaction of amino acids near each other in the sequence have something to do with the formation of at least alpha-helices and beta strands.

There have been pounds worth of papers written since then. In general, statistical surveys of protein sequences have been able to identify folds or motifs by a long list of string and machine learning algorithms. Hidden Markov Models and Bayesian profiles are popular. Of course all these are similar to Chou-Fasman in that they work on the sequence in short segments more or less.

For a while it was thought that molecular dynamics and other discrete simulations might help to solve protein folding by allowing long distance interactions to be involved. Just simulating the entire protein molecule in a computer program as it moves into a folded conformation, but this has not proven to be possible for a couple of reasons: (1) it takes a long time for a protein to fold relative to the length of a tractable simulation (2) the forces involved in protein folding and molecular size scales are not really easy to simulate - they do not precisely simulate the forces and behavior experienced by molecules and they involve many more solvent molecules than most computations can involve - even today's server farms would get clogged up with respectable protein folding simulation.

Since 1994 the Critical Assessment of Structure Prediction (CASP) have provided an open competition every 2 years where 3D structures that have been determined experimentally is held from publication. While its well attended a new class of algorithms showed up around 2000. These algorithms work on the assumption that local forces are important to protein folding, but often incorporating molecular dynamics. Using MD or statistics based on protein structures (see the RCSB for the repository), segments of the protein sequence are tested for structural tendencies. chaining these predictions together, initial protein folds are put together. Once put together long term interactions can assemble a protein structure.

BTW that is not to say that Protein folding is solved - the solutions that come out often produce a structure that is really similar to the final structure, but often there are substantial differences.

This is incredibly terse, but it could get you started. Study of protein without any helices or beta strands is a topic in itself - they can be treated the same way as above. Then there are also proteins who do not have a single fold, but are dynamic and flop around all the time, or only have a shape when in contact with a surface of some kind. So there's even more.

Disclaimer: This is an interesting question if I have understood what you are trying to ask. But unfortunately the case is that there are so many different cases its impossible to cover them here. Other answers talk about folding and modification, but these are still heavily dependant on the "2d" DNA sequence and aren't useful if all one has is a final protein, so I'll discuss the 'rules' of a final structure. This started as a comment and got too long!

In summary, no, there are not many examples in the grand scheme of things where rules at a protein level exist in any sort of grammatical way. Its all about 3D chemistry.

Protein Structure in relation to Function.

Functional areas in a protein are often made up of structures like alpha helices and beta sheets linked by very flexible looping regions. The way these structural elements are connected is generally different in every protein. However some motifs that perform similar tasks can be identified by their 3D shape and order of connection (which I think is what you're asking about). For example the OB motif (images and good starting point here) has a strict order that the beta sheets follow, whereas the helix is optional. Although this is a neat example of protein "grammar", its very much exceptional when motifs like this are identified.

This following answer is educated guessing, and other peoples comments would be helpful.

Proteins are much more complex than a 2 dimensional language like English or DNA. One way to think about why your question is difficult to answer is considering that protein biochemistry happens in 3D space whereas our other examples, language and DNA, operate linearly in a 2D line.

Any evidence of a linear ordering in a finished protein implies very simple folding and post-translational processing. Most biochemical tasks are not simple and require complex nuances in the enzymes' chemistry (which comes from 3D chemistry, not 2D sequence). DNA is complicated too, but like our language, it is designed to be simple and read quickly in a line. This means if a sequence wants to do something a bit more sophisticated, it needs a specific order. This isn't a problem in 3D space as there is a lot more to variation other than sequence.

I suppose you are not asking how does DNA code for mRNA which has codons (sets of 3 nucleic acids) when read in the correct reading frame (where 3 base pairs each are read beggining from the start codon) a ribosome then translates this into protein... theres a lot more details then what I said... that is called translation:

Afterwords the protein is folded into a 3d shape

Other stuff (other than amino acids) can be added, like a a lipid for anchoring into the membrane (GPI anchor or prenylation) or sugar (glycosylation) amoung other things, this is called post translational modification.

if you are asking about the evolution of proteins, here is another article:

wikipedia can get pretty detailed, also there might not be a lot of pictures... lippincott's illustrated biochemistry has lots of great pictures... but it's a book for health science students, not very abstract/theoretical/philosophical so you won't get much on evolution of protein families among different life forms...

If you are asking which amino acids can go together and which stuff can't, I dunno, I'm not a biochemist...

I hope that I got what are you asking. You give the example of words, it's not good one. Look on the protein like a machine or maybe cupboard. You bought one in Ikea and now you need to follow the instruction to bring together all the elements. If you just paste together all the parts you will not get a working cupboard. What rules the parts of cupboard following? Physic.

Take for beginning the Bohr model of atom. If you want simpler example - planets in solar system. After that put 10 atoms together to from the simplest amino acid. What structure will they get? Bring near another amino acid. How will they interact together?

The rules comes from physics. And they are very very very very complected. To understand what structure some protein will get or how it will interact with another protein - you need to take all the atoms in the system and to know how they will act one with another. Only huge computers can calculate such things - and only the simplest of them.

Edit: answer to the comment:
Thats what so amazing in the nature. The evolution found the way to build all the body proteins just from approximately 20 amino acids. By the way that doesn't mean that there is just 20 a.c. There are more that 500. 240 Of them can be found free in nature and other only only as intermediates in metabolism. (http://onlinelibrary.wiley.com/doi/10.1002/anie.198308161/abstract)

If you want another example - take Lego. You have - lets say - 20 types of different peaces but you can make a lot of different things from them.

The nature must use a minimal amount of building blocks. This giving advantage in the evolution cause it is simpler. Look at the DNA. Its build just from 4 building blocks! And caring all the information of how to form entire body. Isn't it amazing? :)

7
Is there a difference between polarity and hydrophobicity?
5
How does protein denaturation work?
3
Why is Cysteine and Tyrosine used to calculate a sequence isoelectric point?

3
Thermodynamics of Forming Peptide Bonds
8
Is consuming proteins different vs. consuming amino-acids and how?
0
If human proteins are synthesized from only 20 different amino acids, then how can there be such variety of proteins in human cells?
3
Are proteins a different shape in space?
3
Are peanut proteins similar to chicken meat proteins?
1
Is protein folding symmetric with respect to reversing the sequence order?