How do humans perceive time?

We can see length, and other physical quantities. We can perceive through our other senses like (temperature through thermoreceptors, weight through pressure receptors etc.). But how do we "sense" time?

The nature of time has been discussed for millenia. We don't know exactly why or where time perception exists, but we do have some information on how it is perceived.

The circadian rhythm is basically in place to help us sleep, wake and perform tasks in a 24 hour cycle of light. Robbed of light, and the melatonin it's absence produces, the rhythm shifts considerably.

Vision is a powerful cue for the passage of time. Bees have an extremely sophisticated ability to predict the sun's location at a given moment (they can count the moments). While I doubt the same is true for humans, our eyes give us a great deal of information about the passage of time: the time in a 24 hour period (the position of the sun, moon, stars, shadows, etc), and the time in a year, the time in a lifetime. Witnessing the passage of time, according to physicist Paul Davies, we observe how the “later states of the world differ from earlier states that we still remember.”

Besides the important input from our eyes and memories, we also have internal timekeepers. A study decades ago on short order cooks (I can't seem to find it) found that an experienced cook can keep internal time to the second, and can keep multiple "stopwatches" going in his head: the scrambled eggs, the toast, the pancakes, the grilled cheese sandwiches all take a certain amount of time, and short order cooks can tell when that time has passed with extraordinary precision.

The fact that the fluids flow at different rates tells us that we perceive time differently under different circumstances. Time perception is surprisingly prone to measurable distortions and illusions.

The importance of our temporal experiences for daily living is strikingly documented in individual neurological cases where patients report of an accelerated progression of time and, consequently, have troubles in adequately interacting with the environment, i.e. driving a car. Psychological research has shown that cognitive functions such as attention, working memory as well as long-term memory determine our temporal judgements. Moreover, drive states, moods and emotions, as well as factors of personality influence duration estimates. For example, time intervals are judged to be longer when we pay more attention to time and when the load of varying experiences stored in memory is higher. Our subjective well-being also strongly influences how time is experienced. Time speeds up when we are involved in pleasant activities, but it drags during periods of boredom. Thus, our sense of time is a function of the intricate interplay between specific cognitive functions and of our momentary mood states.[1]

Where exactly time is perceived by the brain is unknown, but several areas keep appearing, most prominently, the cerebellum, the right posterior parietal cortex, the right prefrontal cortex, as well as fronto-striatal circuits. All have been implicated as the neural substrates of a potential timekeeping mechanism. The inner experience of time[1] gives a broad overview. The conclusion is worth reading.

To further support that the where is not known, consider the following:

Studies done in humans also support the hypothesis that striatum and its afferents are involved in interval timing. Recent fMRI data showed that timing network could involve cortico-striatal loops, including premotor and supplementary motor areas, frontal operculum and dorsolateral prefrontal cortex, and temporal and parietal cortices, as well as the putamen. Imaging studies in humans, lesion studies in humans and rodents, and drug studies in rodents all point towards a central role of the basal ganglia in interval timing. The anatomy of the basal ganglia suggests that information is proceeded through cortico-striato-thalamic loops. Severe deficiencies in reproducing temporal intervals were also found in Parkinson’s patients, therefore, further supporting the hypothesis of basal ganglia involvement in interval timing. There are also lesions data suggesting that the timing network is much widely distributed. Lesions of the nucleus basalis magnocellularis, a cholinergic nucleus in the basal forebrain with projections to the frontal cortex, induced a progressive, proportional, delay in peak time response (memory pattern). This effect is believed to be related to altered temporal memories [42,43] due to change in acetylcholine (ACh) level. Lesions of the frontal cortex produce similar memory patterns, whereas lesions of the hippocampus or fimbria fornix, a basal forebrain cholinergic nucleus with projections to the hippocampus, result in memory effects translated into an advance of the peak time response. These experimental findings undoubtedly support the hypothesis of a distributed interval timing neural network.[2]

For a fun but non-scientific look at time, the NYT has written an understandable article.[3]

The final answer is that no one knows for sure.

The Experience and Perception of Time
1 The inner experience of time
2 Why noise is useful in functional and neural mechanisms of interval timing?
3 Where Did the Time Go? Do Not Ask the Brain
Time and the Brain: How Subjective Time Relates to Neural Time
Human time perception and its illusions

Humans and many other organisms have a circadian clock, a biological system that oscillates every 24 hours (but is also sensitive to external stimuli). There are many components to the human circadian clock that are not known. On the molecular level, gene regulation, post-transcriptional and post-translational modification are all implicated. There is also evidence of a systemic network through which the oscillation propogates, probably via hormones or other intercellular signals.

Many of the molecular mechanisms are not well-understood (and to go into all of them would take all week), but I'll give an example of one fairly self-contained negative feedback loop mediated by the Period/Cryptochrome PER/CRY complex.

PER/CRY is a heterodimeric transcriptional regulator. During the day, it is located in the cytoplasm, unphosphorylated (and sometimes as independent subunits). However, upon phosphorylation, it enters the nucleus and negatively regulates many genes, including itself. This is a negative feedback loop, more PER/CRY in the nucleus means that less will be produced. Here's a hopefully simple figure to illustrate this (Belden et al. 2006): 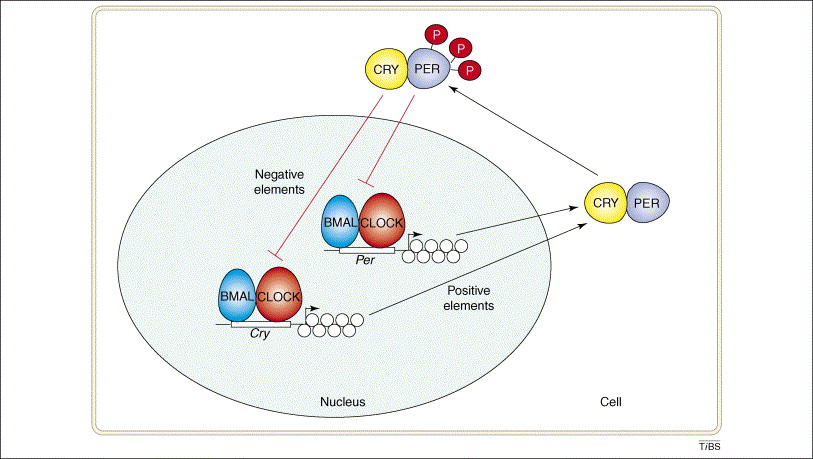 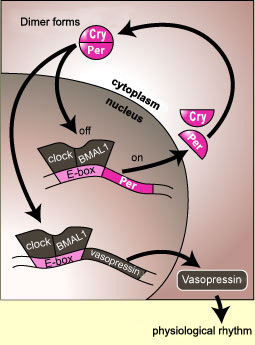 Hopefully this is clear. Remember that this is only part of the entire circadian clock system and that there is more detail even in relation to the PER/CRY complexes themselves (McGill University): 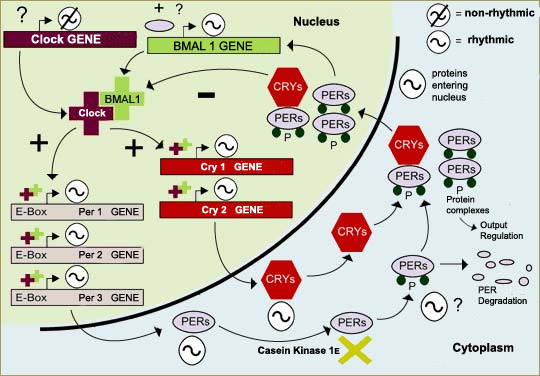 Not the answer you're looking for? Browse other questions tagged human-biology neurology circadian-rhythms or ask your own question.

18
Is the human biological clock genetically programmed or learnt?

12
How do plants 'tell time' for circadian rhythms based on a ~24 cycle?
15
How long can a naked human survive on Mars?
13
What senses are active while sleeping?
4
How does the mechanism which controls blood pressure in the brain work?
2
Variation of length of circadian rhythm in humans in absense of time reference