What is the effect of persistent hypothermia on cardiac performance? 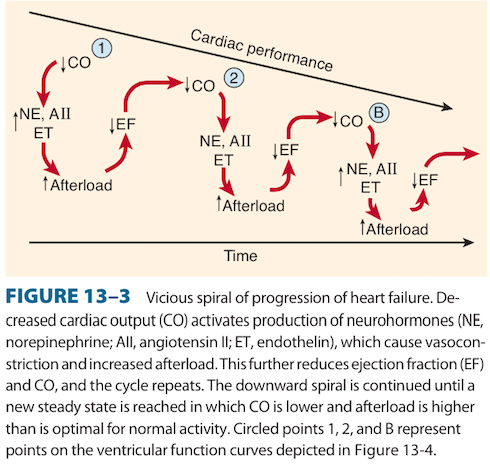 Therefore, I am thinking that the relationship between temperature and cardiac performance cannot be linear at all. Some have said me that low temperature can decrease metabolism and oxygen consumption. However, I started to think differently when time goes enough far that is when heart cannot anymore supply enough blood with oxygen. Thus, hypoxia can occur and asymptomatic exodus may occur.

Based on physiology, I can propose that the cardiac output curve shifts to the left (CO1 $\to$ CO2), due to less oxygen being supplied to the heart, similarly EDV1 (end-diastolic volume) shifts $\to$ EDV2 and SV1 (stroke volume) $\to$ SV2. However, the venous return (VR) curve can shift much more, since I propose that the effect of temperature on smooth musculature is relatively bigger than on heart because of proportional size of tissue. So the VR1 shifts to VR2, so EDV2 $\to$ EDV3 and SV2 $\to$ SV3. Consequently, SV3 > SV1, while EDV3 < EDV1. See my draft figure about this: 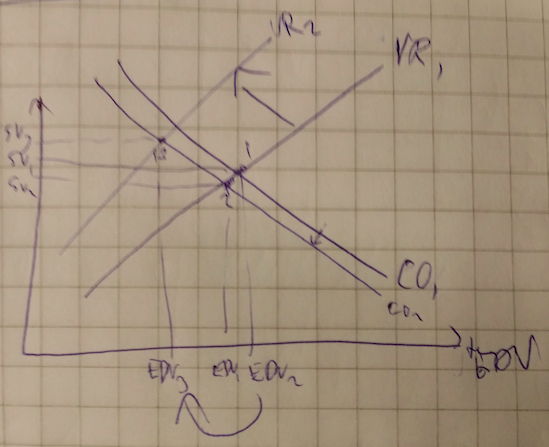 In a healthy person, who have no hypertrophy of ventricles and elastic myocardium, the heart can tolerate this. So such a condition of cardiac failure as in the figure 13-3 is possible.

However, if flexibility of the myocardium, for instance, is not possible, such a pathway may not be possible. The autonomic nervous system may enter the picture and increase vagus nerve stimulation (PS more). However, not sure about the exact pathway.

The publication Long-term risks of cardiac and cerebral vascular diseases increased following winter swimming in the cold seawater which came out just some weeks ago shows a link between long-term winter swimming and CVD. I think this is the best evidence so far about the possible link.

Many processes are affected by temperature including metabolism and growth rates. Reaction rates increase with temperature but not in case of catalysed reactions where the catalyst can operate at only an optimum temperature.

Effect of persistent hypothermia on processes of cAF

Let's have cAF (chronic atrial fibrillation) here as an target. Electrophysiological study shows that cAF-related remodeling is typically divided into three categories: 1) electrical, 2) contractile and 3) structural. They cause respectively

I cannot say now more anything about persistent hypothermia and cAF by confidence. Those mechanisms of Koivumäki et al are cellular processes, while the representation of the heart requires integrative analysis in the cellular, tissue and organ levels.

Persistent hypothermia from the extreme side (Sauna)

so possible effect of persistent hypothermia can be

Please, see the reference of the publication for more better view.

This may seem contradictory to therapeutic use of hypothermia, where it is used to decrease metabolic needs (I don't know what is the mechanism for this) to help compensate for hypoxia (in cardiac tissue and the brain?). Cooling the heart would decrease it's metabolic needs (less perfusion, increased metabolic demands resulting from sympathetic input to heart. I guess the same thing probably happens when doctors prescribe a beta-blocker or non-dihydropyridine calcium channel blocker (CCB), the vascular resistance probably increases (except for the CCB diltiazem which dilates blood vessels in addition to it's effects on the heart). But the main thing is the sympathetic output to the heart, which is blocked by these drugs, and cold; this is more important than the increased peripheral vascular resistance. But remember that afterload is not identical to peripheral vascular resistance!!! The decreased cardiac output would probably decrease blood pressure and afterload, I'm guessing.

As for the slowing of reactions related to vasoconstriction (transmission of nervous signal from hypothalamus via pre ganglionic sympathetic fiber, then synapse in sympathetic chain, then transmission via post ganglionic nerve; release of NE, Epi, AT-II; rate of diffusion to receptor; effect of cold on membrane fluidity; effect on the alpha adrenergic receptor; rate of second messenger signalling cascade; effect of cAMP formation by G stimulator protein or breakdown by phosphodiesterase; effect of Ca++ release; effect on PLC mediated IP3/DAG release; effect on NO release and receptor stimulation of guanylate cyclase; and the various other factors regulating endothelial function and smooth muscle contraction), I don't know. I also assume that an increase in viscosity (a factor included in the calculation of vascular resistance) could be another factor leading to increased vascular resistance, but even if this happens, this is less important than the decrease of the hearts metabolic rate.

Personally I'm not acquainted with the literature on therapeutic use of hypothermia, aside from the ethical debates about using Nazi hypothermia research. I'm just going at it with the same physiology knowledge you have, and relaying your confusion back at you. I'm just as lazy as you and I don't feel like spending hours delving into review articles on hypothermia research, but I agree that it is an interesting question, and it is also relevant to other very important topics in medicine (ie. use of beta blockers, non-dihydropyridine CCBs other than diltiazem).

Not the answer you're looking for? Browse other questions tagged physiology cardiology temperature heart-failure or ask your own question.

4
How does temperature influence the rate of protein degradation?

2
Fast standing and the heart's insufficient accommodation of the increased venous return
5
How does vasoconstriction/vasodilation change blood pressure?
0
What causes the cardiac ventricular pressure change during the isovolumetric part of the cardiac cycle ?
2
Consequences of abnormal blood pressure unrelated to cardiac output?
0
How can the pressure during contraction vary between the left and right ventricles?