I understand this question might fall into opinion based, but I'm trying to write it so that it meets the "Many good questions generate some degree of opinion based on expert experience" part and not get closed.

A closed creationist question about directly observing the evolution of new species made me think about just declaring dog breeds as new species just to provide an answer to that question. Turns out I'm not the first one to think of it, and to be honest I probably read that article and forgot about it.

“If somehow the recognized [dog] breeds existed only as fossils, paleontol­ogists would consider them not one species but many—certainly more than the thirty-six species of wild dogs that live in nature today.”

There is also this question about breeds of dogs being different enough they can't breed. The answer posted to that question discusses attempts to breed beagles with irish setters, and having great difficulty.

I'm aware that the commonly used definition of different species is individuals who can't interbreed and make a fertile offspring. However the Scientific American article I referred to above mentions that animals are often classified as separate species because they are separated by a geographical barrier, and if they could mingle they would make fertile hybrid offspring. The same articles mentions fruit fly research that bred two different species of fruit fly and made fertile offspring, even though they would never interbreed in the wild.

This is speculation, but let's imagine taking an island and putting several breeds of dogs on that island. Many of those breeds would easily interbreed and create mutts. But I'm pretty sure there would some sorting, the large dogs like st. bernards and great danes aren't going to easily interbreed with tiny dogs like chihuahuas. If we came back to this island after 50 or 100 years, we'd probably see small dogs and large dogs (assuming the island had decent ecological niches for both sizes of dogs to survive in)

Creationists like to ask why we haven't observed the evolution of a new species and don't want to listen to arguments about the fossil record or DNA sequences. If we just define some dog breeds as different species, we'd have an easy answer. I think some dogs would at least come close to meeting that definition for these reasons:

So why don't we recognize some dog breeds as different species?

I don't enjoy the idea of comparing people to dogs, but this is a bit akin (please note the bit) to asking if people who are genetically short (or "little people", both proportionate and disproportionate dwarfism), pygmies, short people, normal sized people, tall people, very tall people, and people with acromegaly (gigantism) can be called different species. I compare because it's fairly clear to most individuals that we are all the same species: homo sapiens. About breeding, it is very likely that a reproductive specialist would be quite concerned (I certainly would be) about a woman with drarfism carrying the child of a very tall person (who had very tall parents), but not the opposite pairing.

Below is a photograph of the wedding of Tom Thumb and Lavinia Warren. That union produced no children. Her bridesmaid Minnie, (her sister), who was only 27 inches tall, also married a little person (Edward Newell). She became pregnant with a normal-sized child, but died during the birthing of a 6 pound baby (her baby died as well). 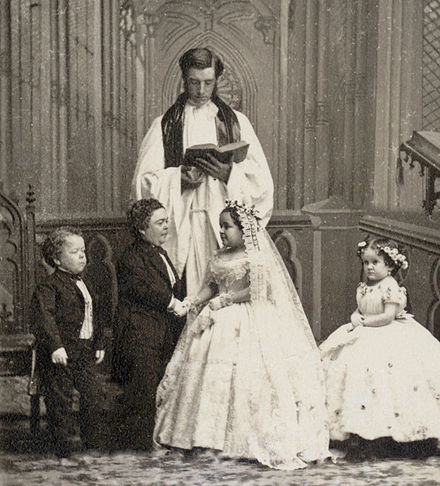 Are they a different species? No. A paleontologist (a good one) would be able to tell that the bones of a little person was actually of the same species based on certain conformations, just as I believe paleontologists today could distinguish prehistoric small cats from very large cats. Size matters, but not nearly as much as the type and distribution of teeth, the shape of the jaw, etc. In other words, I strongly disagree with the following:

If somehow the recognized [dog] breeds existed only as fossils, paleontol­ogists would consider them not one species but many—certainly more than the thirty-six species of wild dogs that live in nature today.

That statement is based on a fairly profound error in thinking: a cognitive bias that is mistrustful of science in general due to a lack of familiarity with the rigors involved in the scientific methods of paleontologists in particular. I say this without rancor or animus of any kind; where I settled down (in the deeply religious region), the vast majority of my children's friends' parents are creationists, and the vast majority of our friends are fundamentalists. We argue about science all the time; I know the basic arguments. I'm familiar with their websites. I personally find myself in the camp of Christian thinkers like geneticist Francis Collins, M.D., Ph.D., the director of the Human Genome Project, who understand genetics and find no threat to their faith in evolution or science. (E.g. Creationists reject all science which indicates the age of the Earth is >~6000 years.)

Finally, about size. The domestic dog exhibits greater diversity in body size than any other terrestrial vertebrate. This is due to a small number of (or perhaps even a single) alleles: the IGF1 Allele. It's hard to argue difference of species on the basis of a small number of alleles: we allow much more variability for other alleles without wanting to classify as different species: eye color, hair color, hair length, straight vs. curly coat, degree of tail curl, ear morphology, etc.

A Single IGF1 Allele Is a Major Determinant of Small Size in Dogs
Lessons learned from the dog genome A species definition for the modern synthesis Single-Nucleotide-Polymorphism-Based Association Mapping of Dog Stereotypes
Canine Genetics Facilitates Understanding of Human Biology How many species of prokaryotes are there? (PNAS)
Ernst Mayr and the modern concept of species (PNAS)
Hybridization, ecological races and the nature of species: empirical evidence for the ease of speciation
Is it Useful to Have a Clear-cut Definition of Life? On the Use of Fuzzy Logic in Prebiotic Chemistry

I don't think taxonomy works as precisely as one would hope...NOT that they don't have standard approaches but they are often working with inadequate information. Rightfully, if a population of chuahuahuas and St Bernards lived side by side in the wild, they would, from a biological standpoint be considered a different species because they could not interbreed. IT would be physically impossible. And, in short time, behaviors of both would tend them to start staying away from each other. NOT that evolution works preemptively, but as behaviors vary...those tiny dogs that simply stayed away from the massive males would tend to survive (NOT die in child birth) while those that inadvertently got pregnant by the massive male DID die in childbirth...any inherited tendency toward the safer behavior would be selected for. The "example" of dwarfism...when it is known, does not apply to finding fossils in rock strata. Through testing and actually experience we know very small people can interbreed with very tall people. Often the pregnancy doesn't end well. But for now and for reasons other than pure science, no one is considering re-naming human taxonomic groups...and they shouldn't IMHO. But with dogs, with sometimes completely different structures and sizes of skulls and other body parts and the recognition that the massive dog's fetus would not life and be birthed from the tiny dogs womb would incline them to be described as different species. Size AND VARIATION in structure does matter in taxonomy.

Not the answer you're looking for? Browse other questions tagged evolution species or ask your own question.

9
Are there dog breeds that are so far apart genetically that they can't produce viable offspring?
1
Can you answer Ray Comfort's question on Biological Evolution?
3
Taxonomy and 'breeds' of animal species