How much energy does a lion contain? [closed]

I was looking into the following problem: 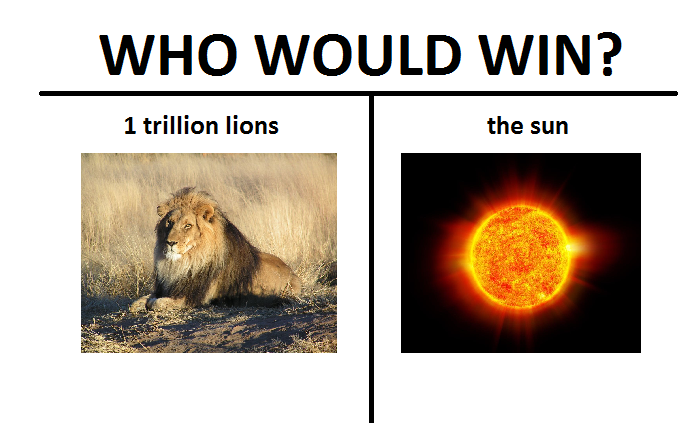 However, I'm now trying to figure out how many lions it would take to have an output equal to the sun, but I seem to be having a hard time finding good data.

What's the peak energy output of a lion per second (or where/how can I find such information)?

Wow, as an astrophysicist who has just logged into biology SE for the first time, I didn't think I'd have a question I could immediately answer.

If the lion is in its usual passive state, i.e. lying around as shown in your picture, then you would not go far wrong in treating them as black body radiators (well this will give you an upper limit, though the emissivity of human skin is quite high, so it should be a reasonable approximation.). To estimate a power I need a lion's temperature and its surface area.

According to this site the body temperature of a lion is 311.33 Kelvin.

I found a calculator that used the DuBois formula for surface area (for humans) and put in 440 pounds and 7 feet 10 for the weight and "height" of a (male, adult) lion - this returned a surface area of $3.6\ m^2$ (about twice a, male human, so sounds roughly ok).

Now using the Stefan-Boltzmann formula $P = \sigma A T^4$, I get the power output of a "black body" lion to be about 2 kW.

But now take the question at its most basic. Compared to the Sun, the lion is a pretty effective power generation unit. The Sun only generates $2\times 10^{-4}\ W/kg$, whereas a lion-based power source weighs in with a massive $10\ W/kg$!

EDIT: Note that the calculation just assumes the Lion can produce this kind of power output whatever environment it is in. In practice a Lion absorbs a large fraction of this power from its surroundings and its internal metabolism does not need (and probably cannot) supply 2kW. Thus the 2kW should be reduced to some extent, though I'm not sure a simplistic $T^4 - T_{\rm env}^{4}$ calculation can be correct, unless one of you biologists tells me that a Lion's metabolism shuts down once the ambient (African) temperature approaches 311K (I guess in a human a lot of it goes in evaporating sweat?) Whatever, the order of magnitude of the answer is unchanged.

The sun will win until you have enough lions to form a star sized mass.

So your lions would have enough mass to become gravitationally crushed into an object, but probably not enough to become rounded. Once crushed they won't be able to carry out any metabolism.

Even if we considered the sum of 2 trillion individual lions the sun would still win because nuclear fusion completely outclasses chemical reactions in terms of energy released, and the mass of the sun is still much much much larger.

However, if we somehow converted the lions into energy by E=mc2, we get about 1.8×1031 J. So if you managed that you could release more energy than the sun for a very short time.

Not the answer you're looking for? Browse other questions tagged zoology literature or ask your own question.

5
Are tongues red because they contain blood?
15
How does paracetamol work?
3
How much do crocodiles eat?
2
Does the red blood cell in frogs undergo amitosis?
3
How much vitamin C has a noticeable effect on E.coli k12
1
How lion can carry the cub without harming it?
0
What does hypolithial mean