What is the human ear's temporal resolution?

What is the smallest sound duration that the human can hear? In other words, what is the lower duration limit for a sound to be translated into electrical signals by the ear?

Suppose the human ear can discern or distinguish between 18 kHz and 20 kHz sounds, this would mean that, if a single wave could be processed at 20 KHz, the sound duration would be 1 / (20KHz) = 0.00005 second, which would be next to incredible (and probably impossible).

I am particularly interested in the lower duration limit as depending on frequency.

I am expecting something like this (I am not sure)

I will provide an answer in 2 parts. The first part is a theoretical approach based on the absolute possible minimum (my original answer). The second part focuses on experiments in the peripheral auditory system (added edited answer).

PART I: Absolute theoretical minimum (original answer) As you inquire about electrical signals in the auditory human system I have to say that electrophysiological data at such a fundamental level is scarce in humans. That having said, we can start off by looking at auditory clicks, which are generally the shortest possible well-defined auditory stimuli. The shortest auditory click I was able to find, and which was used in a psychophysical context (i.e., audible to a human) was 10 microseconds (Leshowitz, 1971).

Now, (1) assuming 10 microseconds is the lower duration limit of a click (it may well be lower), and (2) assuming this click duration is representative of the lower limit of a tonal burst duration limit (it may well not be), and (3) assuming you indeed wish to know about/use auditory tones and not clicks, and finally (4) assuming we need at least one wavelength of a tone to fit in this window, then we could present a frequency of 100 kHz, or higher. As 20 kHz is the upper frequency limit of the human ear, we would need at least 50 microseconds for one wavelength, i.e., basically what @Dustin concluded, but it does not end here:

Frequency splatter (Fishbach et al., 2001) limits the lower limit of tonal stimuli. To prevent spectral splatter one needs to incorporate rise and fall times (ramps) onto the tonal stimulus. Hence, again assuming you do want tonal stimuli, an onset and offset ramp of one wavelength each would be advisable (at the very least) and hence 3 wavelengths are needed, increasing the duration of a 20 kHz tone to 3 wavelengths, i.e., 150 microseconds (spectral splatter may not be prevented, but at least reduced).

On top of this theoretical approach, it has to be noted that I started off with taking a click as a starting point. A click, being an impulse signal, basically stimulates the entire cochlea (the inner ear), and hence represents the most powerful auditory stimulus. Pure-tone bursts are, as a consequence, weak stimuli as they stimulate a small proportion of the available hair cells. High sound levels may therefore be necessary for short tonal stimuli, in turn degrading the frequency resolution in the cochlea as excitation spreads away from the characteristic frequencies. Mostly, several milliseconds are used as tone bursts.

Moreover, taking 20 khz is kind of an upper limit, and many folks are not even able to hear 16 khz. An upper limit of, say, 12 kHz would be advisable when grownups are used. This means a wavelength of 83 microseconds and for 3 wavelengths (for ramp times) that means 250 microseconds.

If lower frequencies are needed, this number would increase further.

EDIT: PART II. Phsyiological experiments. As you are also interested in electrical signals, we might take another approach and start looking at experimental (animal) data. The temporal limits of the auditory system are generally assumed to reside in the ribbon synapse that is situated between the inner hair cells and the auditory nerve fiber (Parsons, 2006): 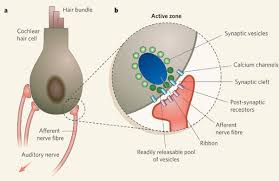 This synapse is considered to be the limiting factor in the temporal characteristics of the auditory system (Khimich, 2005). By analyzing this synapse using very short tone bursts, it was shown that the vesicles of glutamate (the neurotransmitter activating the auditory nerve fibers that lead the signal to the brain) were released as shortly as 2 ms after tone onset. Tone bursts were 8 - 16 kHz, 10 ms plateau, 1 ms rise/fall (Khimich, 2005). Note the tone burstduration and rise fall times mentioned in answer PART I.

Indeed, when first spike times in auditory nerve fibers were determined, spikes with the shortest latency occurred just under 2 ms (Heil and Irvine, 1997).

Hence, from these experiments I dare say that 2 ms would be sufficient to elicit at least one spike.

Why then leave part I of the answer? The problem is that the experimental data do not show that a spike wouldn't have been generated at shorter stimuli. The data merely show that with an ongoing stimulus the first spike appears at 2 ms. It does not show whether 2 ms of temporal summation is necessary, and that is why I have left part I of my answer in place, as a theoretical lower bound.

As a side note: the spike rates are highly dependent on loudness levels. Lower sound levels result in longer latencies. Specificaly, acceleration of the stereocilia on the inner hair cells in the cochlea is the primary parameter. The faster the cilia move, the faster the spike response.

Abel (1972) reported duration DLs ranging from approximately 0.4 to 80ms for stimulus durations of 0.2 and 1000 ms, respectively. The lowest frequency on average is $20$ kHz but all people are different and some people may hear at a lower frequency.[1]

A different type of auditory temporal resolution can be assessed by measuring the minimum detectable duration of a gap in a continuous sound. The gap detection is in the order of 2 to 3 ms for tones at moderate and high sound pressure levels (Exner, 1875; Ostroff et al., 2003; Plomp, 1964). Zwicker and Feldtkeller (1967) reported values of 1.5 ms and 5.0 ms for gap detection in tonal signals and noise, respectively.[1]

Not the answer you're looking for? Browse other questions tagged human-biology hearing human-ear or ask your own question.

15
Is it a limitation of the eyes, or the brain, that we can't see a moving bullet?

17
Will humans and animals be harmed by frequencies outside their hearing range?
7
How can one accurately diagnose the cause of human hearing loss without surgery?
5
Why do human ears have a lower boundary for the lowest energy perceivable signal than eyes?
40
Can humans perceive sounds above 20 kHz?
4
What are the lower and upper hearing limits of the human ear?
5
What's the frequency resolution of the human ear?
3
How can humans hear low frequency sounds using the cochlea which is tiny compared to wavelength?
5
Why are mammals the only animals with pinnae / outer ears?