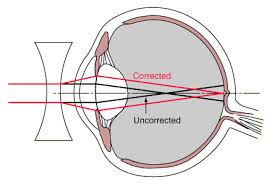 I found this image while reading optical instruments in physics. If we look at the uncorrected rays, we see that the image they outline gets inverted. So why don't people with myopic vision see images as inverted representations?

You have misinterpreted the nature of the light rays shown in the diagram in the question. The two rays are representing light coming from the same (distant) point in the environment, that is, some small feature on an object is reflecting (or emitting) light in slightly different directions and reach the eye separated by a small amount (less than the width of the pupil). The rays are almost, but not quite, parallel. The two rays, coming from the same point, should be focused on the same point on the retina (as are the red rays corrected by the external lens). The spread of the uncorrected rays in myopia or hyperopia sends them to different places of the retina, causing the image to be out of focus, not upside down.

The path of light from an entire scene can be illustrated like this: 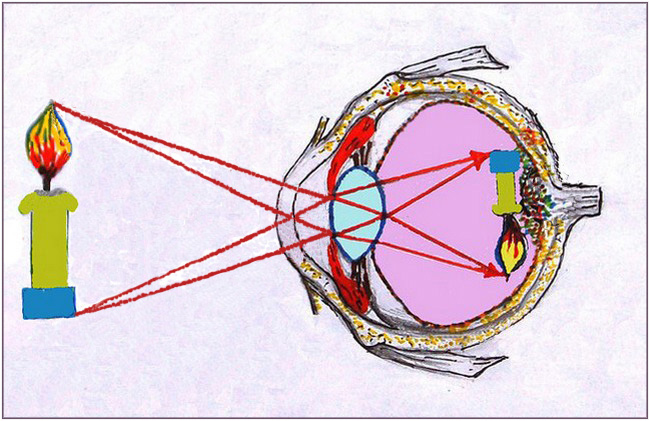 As this diagram shows, the image is upside down for all of us, in focus or not. That the image top is at the bottom of the retina is not especially important -- the cells doing the interpretation could have been located physically located anywhere as needed.

Myopia does not cause image inversion. @mgkrebbs provides an answer with a clearer diagram than the one you have provided that illustrates how only the focussing ability, not the orientation, of an object changes.

However, an image can be inverted by special inversion glasses. Furthermore is that the brain can convert the image to the right way around.

Although myopic vision can't cause the inversion, the answer you're looking for is probably that perceptual adaptation, a phenomenon that occurs to correct our vision, comes into play in cases of inversion. The brain "gets used to" inverted images and what you visualise becomes the correct orientation. So lets say myopia did cause inversion, the person with naturally inverted vision wouldn't experience anything unusual.

The below text from the wikipedia entry describes an experiment with inverting glasses. These glasses contained prisms that flipped the real world image before it reached the eye. Note the experiment was carried out in the in the late 1800s.

On a later experiment, Stratton wore the glasses for eight whole days. By day four, the images seen through the instrument were still upside down. However, on day five, images appeared upright until he concentrated on them; then they became inverted again. By having to concentrate on his vision to turn it upside down again, especially when he knew images were hitting his retinas in the opposite orientation as normal, Stratton deduced his brain had reprocessed his vision and adapted to the changes in vision.

A more recent study by Linden et al., 1999 confirmed the same thing happening with more up to date inverting glasses. The subjects reported slightly different results. Rather than the image being inverted, it was more the case that the subject felt their reality became inverted to match the inverted image. I can't see someone suffering with myopic vision being able to make this distinction since they would only be used to one orientation. 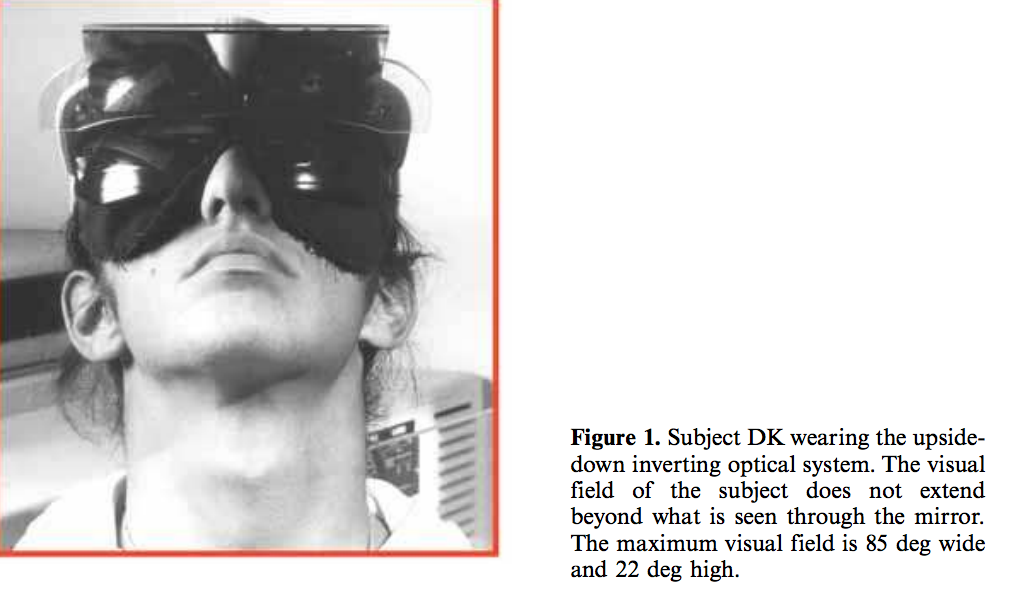 On removal of the glasses, the world becomes temporarily re-distorted, but normal vision and perception returns.

1
What do you see if you look at your own retina with the same eye? (optical feedback)
10
Why does a light object appear lighter in your peripheral vision when it's dark?
5
Why can myopic eyes focus on nearby objects, but not on distant ones?
4
Why do we see a different color when we mix two colors?
5
Why did we lose our fourth type of cone cell (in the eye)?
1
What is the smallest visual unit perceptible to the human eye, like a pixel? (esp. in visual static)
2
Can the human eye axial length decrease?