Father with mutated mtDNA- why isn't his offspring at risk?

Mothers transmit their mitochondria (and therefore mtDNA) to their offspring and fathers don't. Lets assume that father had a mutation of the gene that encodes mtDNA, would then be his offspring at risk? Why?

I also found the following statement: "The current genetic advice is that fathers with mtDNA mutations are at no risk of transmitting the defect to their offspring."

How can that be true? Is it because of gene silencing?

Thank you in advance!

...would then be his offspring at risk? Why?

No. Generally speaking, fathers do not pass on their mtDNA (Mitochondrial DNA).

Why? Because the mitochondria present in oocytes (egg cell) is the mother's, as every oocyte directly inherits the mother's mitochondria when they are made in the reproductive organs. The mitochondria that the sperm from the father carry to the egg do not enter the egg cell or are destroyed in the process. 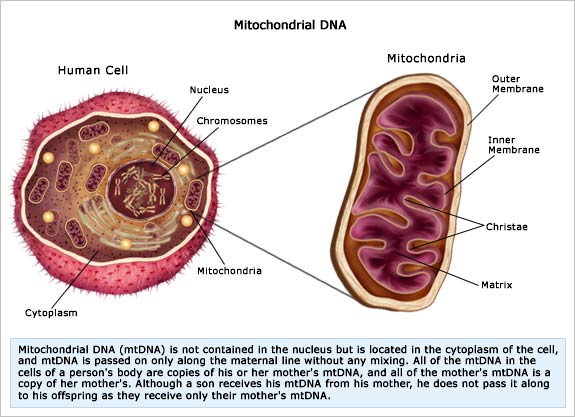 Occasional occurrence of paternal inheritance of mtDNA has been suggested in mammals including humans. Clearly, spermatozoa have mitochondria; they make the energy needed for motility. Paternal mitochondrial DNA (mtDNA) does enter oocytes. It is a persisting fallacy that only maternal mtDNA is present in humans because only oocyte mitochondria are present in the product of conception.

This has been known for some time. According to an article in the Proceedings of the National Academy of Sciences, Nov. 1996, under Evolution:

In vertebrates, inheritance of mitochondria is thought to be predominantly maternal, and mitochondrial DNA analysis has become a standard taxonomic tool. In accordance with the prevailing view of strict maternal inheritance, many sources assert that during fertilization, the sperm tail, with its mitochondria, gets excluded from the embryo. This is incorrect. In the majority of mammals — including humans — the midpiece mitochondria can be identified in the embryo even though their ultimate fate is unknown. The "missing mitochondria" story seems to have survived — and proliferated — unchallenged in a time of contention between hypotheses of human origins, because it supports the "African Eve" model of recent radiation of Homo sapiens out of Africa.[1]

So, what happens to paternal mtDNA if it is indeed present in embryonic cells? Paternal mitochondria are targeted and destroyed.

While some confusion may still persist in popular science, research data clearly document that the paternal sperm-borne mitochondria of most mammalian species enter the ooplasm at fertilization and are specifically targeted for degradation by the resident ubiquitin system. Ubiquitin is a proteolytic chaperone that forms covalently linked polyubiquitin chains on the targeted proteinaceous substrates....Prohibitin, the major protein of the inner mitochondrial membrane, appears to be ubiquitinated in the sperm mitochondria.[2]

A finding of a patient with severe exercise intolerance in whom the mutated mtDNA in muscle was shown to be paternally inherited challenged the concept of strict maternal inheritance of mtDNA (the mtDNA harboring the mutation was paternal in origin and accounted for 90 percent of the patient's muscle mtDNA.)[3]

Paternal mtDNA inheritance may have gone unrecognized in cases of mitochondrial disease with no clear maternal pattern of inheritance because mitochondrial haplotypes are rarely investigated in diagnostic analyses.

However, a small study of 12 patients with mitochondrial myopathy failed to show Paternal mtDNA.[4]

It is too simplistic to say paternal inheritance of mtDNA does not occur. It has been shown in mice and other mammals.

We should not believe everything we read without more investigation.

17
Can two humans with 44 chromosomes produce viable offspring?
5
Genetic carrier Pedigree of Recessive Traits
10
Why Can't A Male Mule Have Offspring?
4
Why isn't Rh disease present in other mammals?
3
Forensic genetics- why is mtDNA comparison sometimes better than nDNA comparison?
1
Statistically, why is the number of mutated genes in eggs treated with chemical mutagenesis one?
3
Can mitochondria with "depleted" mtDNA reproduce?