Why do adults lose hearing at high frequencies?

Hearing declines with age and, typically, high frequencies are affected first. Age-related hearing loss (or presbyacusis (Kujawa & Liberman, 2006)) is progressive and starts at the highest frequencies and as a person ages the lower frequencies are affected. The reduction in hearing sensitivity is caused by the loss of hair cells. Hair cells are sensory cells in the inner ear that convert acoustic vibrations into electrical signals. These signals are transmitted to the brain via the auditory nerve.

Because of the tonotopic organization of the inner ear (the cochlea) one can conclude that presbyacusis develops from the basal to apical region. The following schematic of the cochlea from Encyclopædia Britannica, Inc. nicely shows the cochlear tonotopy (i.e., high frequencies in the base, low frequencies in the apex); 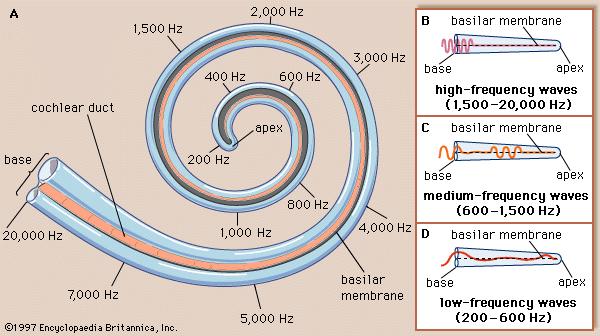 As to your question why the basal region is more sensitive to aging - that is a very good and interesting question that has not been answered, as far as I am aware. What is known, however, is that the basal regions of the cochlea are also more sensitive to the damaging effects of ototoxic antibiotics such as kanamycin (Stronks et al., 2011) and other aminoglycosides, and some chemotherapeutics such as cisplatin (Schacht et al., 2012). In low doses these compounds specifically target the basal regions over the apical ones (at high doses the whole cochlea is affected).

Perhaps the specific anatomy and circulation causes the basal region to be affected more by these chemicals. For example, blood flow may be enhanced basally whereby environmental and food-based chemicals may enter the basal region more readily (educated guesses, I can dig up references of authors posing these possibilities if necessary). This scenario may also contribute to presbyacusis, since it is quite imaginable that years of exposure to various substances may cause accumulation damage specifically to the basal parts of the cochlea.

In addition, since high frequencies are coded in the basal region, and given that sound enters the cochlea in the basal region (see picture below), all sounds, including damaging loud low-frequency stimuli first travel to the base on their way to their point of processing. 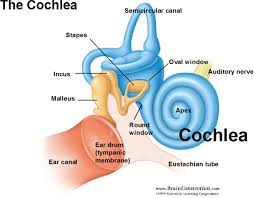 Because sound is analyzed as a travelling wave, sound travel stops at that point where the frequency matches the cochlear characteristic frequency. There the wave quickly dies out due to cochlear filtering (Mather, 2006); see the first picture above. In effect, more apical parts of the cochlea are exposed less frequently to (damaging) sound stimuli, while the base of the cochlea is exposed to all sounds entering the inner ear.

Hence, chemical exposure and acoustic wear and tear may be more prominent in the cochlear base, which can explain why presbyacusis starts at the very high frequencies and progresses to low frequencies (upward in the cochlea) from there.

Not the answer you're looking for? Browse other questions tagged hearing neurophysiology neurodegenerative-disorders or ask your own question.

7
How does prolonged exposure to high frequency noise affect hearing?
7
How can bats hear such high frequencies?
3
Does loud music affect hearing and balance?
3
Can somebody be deaf to voices of some people only?
6
What causes the tonotopic organization of the inner ear?
3
How much does hearing deteriorate with age?
3
Distribution of hearing loss
3
What determines the maximum frequency limit that humans can hear?