Why do ants live so long?

I was surprised to learn that worker ants in some species live many years. I would have expected a lifespan of a few weeks or months (which is apparently the case for many species).

What factors might account for the length (and/or variation) in ants' lifespans? (ie, is there some evolutionary preference? Some fundamental limit on the reproductive capacity of the queen?) Is there any relationship between these lifespans and different structures of ant communities?

There will always be a tradeoff in terms of resource allocation between reproduction and self maintenance. Since worker ants forego reproduction to perform other roles (gathering resources, caring for young etc.) within the colony, it makes sense that this would favour a longer lifespan. This idea works for most animals (i.e. higher reproduction = lower lifespan across species in general) and is well documented (Partridge et al. 1987, Gems & Riddle 1996 (PDF link), Westendorp & Kirkwood 1998 - to name a few). However the relationship is reversed in eusocial animals: the queens of ants, some bees and naked mole rats (which are all eusocial) tend to be longer lived than their sterile workers (Hartmann & Heinze 2003). Aging patterns within ants and other eusocial organisms are a very popular research topic at the moment, but the mechanisms causing differences between social castes are not fully understood.

Eusociality is strongly associated with increased lifespan, indeed many studies on the evolution of aging have focussed on eusocial animals which have appeared to overcome aging effects to an extent (Keller & Genoud, 1999, Buffenstein 2005). The naked mole rat is one of very few species of eusocial mammals and the relationship between its lifespan and body mass is very dissimilar to that of other rodents (ignore the bat points): 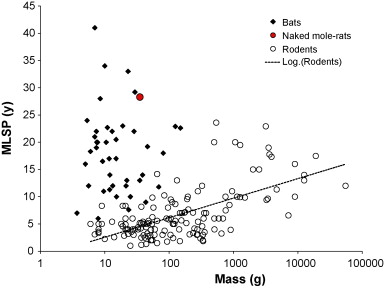 Within eusocial colonies, there is often a protective environment (Buffenstein & Jarvis 2002): there is usually a physical structure (nest or burrow); symbiotic bacteria and/or fungi creating a more hygienic microflora; and queens are also protected by other castes. This gives queens a lower incidence of death due to accident or attack which (from the reasoning in the previous paragraph) supports the selection of a longer reproductive life. This is likely to lead to longer lived workers since they share the same genes.

However queens do tend to live much longer than their workers (O'Donnell & Jeanne 1995). This is probably due to their reproductive role. All the ants in the colony are investing in reproduction (whether by physically giving birth to young or by providing it with food and protection) therefore the normal relationship (reproduction and lifespan tradeoff) mentioned at the start is not relevant, but since the queen is the only individual reproducing, it will be the only one for whom lengthened lifespan is beneficial evolutionarily.

A mean lifespan of 20 years has been observed in Formica exsecta, and a maximum lifespan of 28.5 years observed in Lasius niger. Pogonomyrmex owyheei has an observed maximum of 30 years, and mean of 17 years. These (and many more) figures were obtained from a review by Keller (1998).

Not the answer you're looking for? Browse other questions tagged zoology entomology ant lifespan collective-behaviour or ask your own question.

7
Why don't all ants have wings?
10
Why do ants dig surface paths?
8
Can ants sense food from a long distance?
8
Cannibalizing behaviour in ants
13
Do ants really dispose of their own dead, and how/why?
25
Do ants really find the shortest path to a food source?
4
Why are these ants moving as a pack?