Can humans perceive sounds above 20 kHz?

In the never-ending debate raging in the audiophile community about sound quality and what humans can or cannot hear, it is very very very very incredibly often cited that the upper-limit of the audible range of human hearing is 20 kHz, give or take. Some indicate that this is a conservative estimate, and that the actual upper-limit is actually lower than that (~18 kHz). While others suggest that sounds could be heard or otherwise perceived up to about 25 kHz-30 kHz:

And some others suggest that there is substantial variation between individuals around the upper limit:

The human range is commonly given as 20 to 20,000 Hz, though there is considerable variation between individuals, especially at high frequencies

So is there any biological evidence whatsoever that young, healthy humans can hear or otherwise perceive (or sense) sound waves above 20 kHz? And what would be a conservative estimate of the absolute upper limit of the audible spectrum for humans (i.e. usable sound information for human ears and senses)?

Yes, we can. By means of bone conduction we can hear up to 50 kHz, and values up to 150 kHz have been reported in the young (Pumphrey, 1950). However, it is indeed generally agreed that 20 kHz is the upper acoustical hearing limit through air conduction. The reason for this is debated, but the transfer function of the ossicle chain in the middle ear is a suspected culprit in setting the upper frequency limit to 20 kHz (Hemila et al., 1995).

Hence, using normal speakers or headphones 20 kHz is a very reasonable absolute upper limit. Note that the Nyquist criterium necessitates higher sampling rates (at least 40 kHz), so your statement of using 50k-60k sound cards is correct. If you decide on using bone conduction aids, you might start to think on using higher sampling rates still.

Here is an example of a commercially available bone conduction head set (AfterShockz): 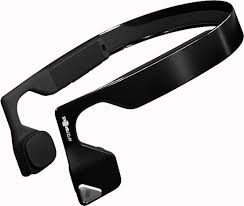 These devices have the potential to increase the upper limit because they bypass the middle ear and hence circumvent the limiting transfer function of the middle ear. They induce vibrations onto the temporal bone, that travel via the bone directly to the inner ear. See the following picture from The High Tech Society: 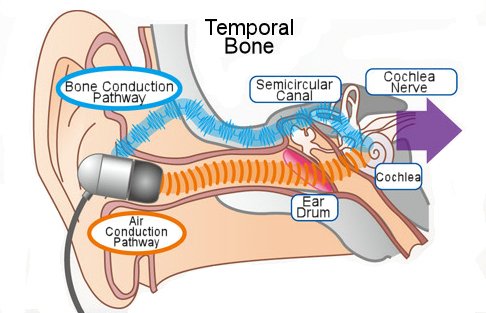 As a side note: when you grow older the hearing sensitivities at high frequencies are severely reduced, and even the 6 kHz range is severely affected in the elderly (picture from John Perr's website):

Disclaimer: I haven't looked into the capabilities in terms of upper frequency limits of bone conduction head sets. I am just talking theoretical limits.

If all the processes through which a signal passes are linear, then it makes sense to speak in terms of a maximum useful-content frequency. If a signal passes through non-linear stages, however, it is possible that frequency content which would in and of itself be above the range of hearing, may interact with other frequency content which is also above that range, in such a fashion as produce artifacts which are well within the range of hearing.

A rather annoying example of that may be observed when a GSM cell phone is located near audio equipment. All of the frequency content transmitted by the phone exceeds the upper limit of human hearing by multiple orders of magnitude, and yet the annoying buzz picked up by the audio equipment clearly does not.

What happens is that the frequency content of the cell phone's transmissions contains numerous frequencies which are separated by tens or hundreds of hertz, and many amplifier stages don't completely filter out the radio-frequency content, but are unable to process it without distortion. This distortion causes the amplifier to output sum and difference frequencies, some of which are very much in audible range.

Many kinds of objects and materials will reflect sound waves in a fashion which varies in non-linear fashion with the sounds being reflected. If a diaphragm which had more freedom of movement in one direction than the other were hit with a mixture of 100,000 Hz and 100,100 Hz tones, it would "buzz" at 100 Hz, whereas it would not do so if hit by either tone alone; further, a conventional recording of the combined tones by a high-quality microphone would detect nothing, so playing it back in the presence of the diaphragm would yield no buzz.

It would be rare for aesthetically-pleasing audio content to have frequency content over 20 kHz which contributed materially to its aesthetic aspects. It would certainly be possible, however, to construct frequency content over 20 kHz, however, which could be heard in many common environments, and whose perceived sound would vary in ways that would not be possible using only frequencies below 20 kHz, and would not be implausible that some kinds of musical instruments (e.g. handbells) might produce mixtures of high frequency content which would sound different to different people who found them pleasing, in ways which could not be mimicked using only directly-audible frequencies.

It may be possible for an audio technician working with a functional MRI team to create, for an individual, a sound which was indistinguishable from the original, but for another individual that recreated sound might sound nothing like the original.

Sampling rate and the audible spectrum

I'm sure you've heard this many, many times: The human hearing range spans 20Hz to 20kHz. It's important to know how researchers arrive at those specific numbers.

First, we measure the 'absolute threshold of hearing' across the entire audio range for a group of listeners. This gives us a curve representing the very quietest sound the human ear can perceive for any given frequency as measured in ideal circumstances on healthy ears. Anechoic surroundings, precision calibrated playback equipment, and rigorous statistical analysis are the easy part. Ears and auditory concentration both fatigue quickly, so testing must be done when a listener is fresh. That means lots of breaks and pauses. Testing takes anywhere from many hours to many days depending on the methodology.

Then we collect data for the opposite extreme, the 'threshold of pain'. This is the point where the audio amplitude is so high that the ear's physical and neural hardware is not only completely overwhelmed by the input, but experiences physical pain. Collecting this data is trickier. You don't want to permanently damage anyone's hearing in the process.

The upper limit of the human audio range is defined to be where the absolute threshold of hearing curve crosses the threshold of pain. To even faintly perceive the audio at that point (or beyond), it must simultaneously be unbearably loud.

At low frequencies, the cochlea works like a bass reflex cabinet. The helicotrema is an opening at the apex of the basilar membrane that acts as a port tuned to somewhere between 40Hz to 65Hz depending on the individual. Response rolls off steeply below this frequency.

Thus, 20Hz - 20kHz is a generous range. It thoroughly covers the audible spectrum, an assertion backed by nearly a century of experimental data.

Above: Approximate equal loudness curves derived from Fletcher and Munson (1933) plus modern sources for frequencies > 16kHz. The absolute threshold of hearing and threshold of pain curves are marked in red. Subsequent researchers refined these readings, culminating in the Phon scale and the ISO 226 standard equal loudness curves. Modern data indicates that the ear is significantly less sensitive to low frequencies than Fletcher and Munson's results.

This seems to imply that it's highly, highly improbable that anything above 20 kHz could be heard by the human ear, and that in most realistic conditions even that threshold would never be reached. I'm curious if others more knowledgeable can confirm or contradict this...

Not the answer you're looking for? Browse other questions tagged hearing human-ear ultrasound or ask your own question.

7
Why don't we hear ultrasonic sounds as aliased versions of the original signals?
5
Why do human ears have a lower boundary for the lowest energy perceivable signal than eyes?
4
What determines the perceived pitch (frequency) of tinnitus?

17
Will humans and animals be harmed by frequencies outside their hearing range?
14
What is the human ear's temporal resolution?
4
What are the lower and upper hearing limits of the human ear?
5
What is the biological limit on hearing resolution?
35
Does this recording sound like the pulses emitted by bats?
4
In what range do humans generally interpret sound best?
3
Can a brain process auditory signals at 18 weeks of human development?
7
Are there any animals that are unable to hear the human voice?