What species of Cerapoda lived during the Jurassic?

So far, I've found eleven species of Cerapoda that lived during the Jurassic period. Are there any other known species that I've missed?

The eleven that I've found out about are:

I am a game board designer working on a game related to dinosaurs. The "only" research i did is Wikipedia + the DK book "Prehistoric" + Dino Directory web site + several more lesser sites. I would appreciate any information on other species if my list isn't exhaustive, or literature suggestions that might help me.

Here is a cladogram from "The phylogeny of the ornithischian dinosaurs", Butler, Upchurch, & Norman, Journal of Systematic Palaeontology (2008): 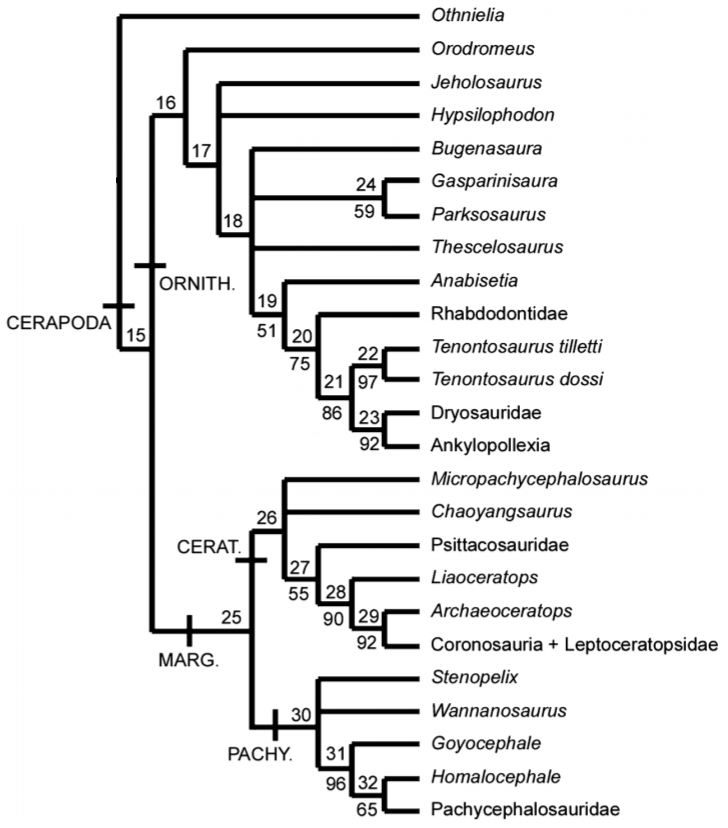 lived during the Jurassic.

The synopsis explains well why this classification is subject to adjustment, and why you may have seen contradictory models in your research:

SYNOPSIS Ornithischia is a familiar and diverse clade of dinosaurs whose global phylogeny has remained largely unaltered since early cladistic analyses in the mid 1980s. Current understanding of ornithischian evolution is hampered by a paucity of explicitly numerical phylogenetic analyses that consider the entire clade. As a result, it is difficult to assess the robustness of current phylogenetic hypotheses for Ornithischia and the effect that the addition of new taxa or characters is likely to have on the overall topology of the clade.

The new phylogenetic analysis presented here incorporates a range of new basal taxa and characters in an attempt to rigorously test global ornithischian phylogeny. Parsimony analysis is carried out with 46 taxa and 221 characters. Although the strict component consensus tree shows poor resolution in a number of areas, application of reduced consensus methods provides a well-resolved picture of ornithischian interrelationships. Surprisingly, Heterodontosauridae is placed as the most basal group of all well-known ornithischians, phylogenetically distant from a stem-defined Ornithopoda, creating a topology that is more congruent with the known ornithischian stratigraphical record. There is no evidence for a monophyletic ‘Fabrosauridae’, and Lesothosaurus (the best-known ‘fabrosaur’) occupies an unusual position as the most basal member of Thyreophora. Other relationships within Thyreophora remain largely stable. The primitive thyreophoran Scelidosaurus is the sister taxon of Eurypoda (stegosaurs and ankylosaurs), rather than a basal ankylosaur as implied by some previous studies.

The taxonomic content of Ornithopoda differs significantly from previous analyses and basal relationships within the clade are weakly supported, requiring further investigation. ‘Hypsilophodontidae’ is paraphyletic, with some taxa (Agilisaurus, Hexinlusaurus, Othnielia) placed outside of Ornithopoda as non-cerapodans. Ceratopsia and Pachycephalosauria are monophyletic and are united as Marginocephalia; however, the stability of these clades is reduced by a number of poorly preserved basal taxa.

This analysis reaffirms much of the currently accepted ornithischian topology. Nevertheless, instability in the position and content of several clades (notably Heterodontosauridae and Ornithopoda) indicates that considerable future work on ornithischian phylogeny is required and causes problems for several current phylogenetic definitions.

7
What were the mammal ancestors like 65 million years ago?
3
What is the human species divergence time
1
What is the number of species known through paleontological evidence?
2
Book for artists' renderings of extinct species?
6
Has the most recent common ancestor of all living birds lived after dinosaur mass extinction?
1
What did the ancestors of textile moths eat?
1
How many plant species would have existed immediately after the K-PG extinction?