This insect bumbled into my bedroom last night - can someone ID it for me? I'm mainly curious because I'd like to know if it poses any danger to my cats (who were very eager to add it to the menu). 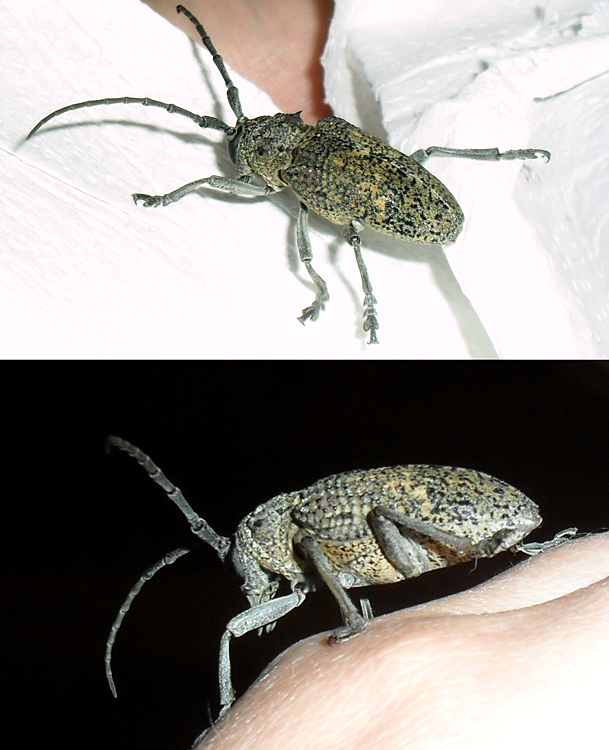 It was about an inch and a half to two inches long, and when I picked it up to toss it outside it made a loud squeaking noise. I live just outside of Cape Town, South Africa (but I'm not a native, so I don't know all the species here).

It appears to be a longhorn borer beetle. A more comparable picture is found here. Are there fig trees nearby? 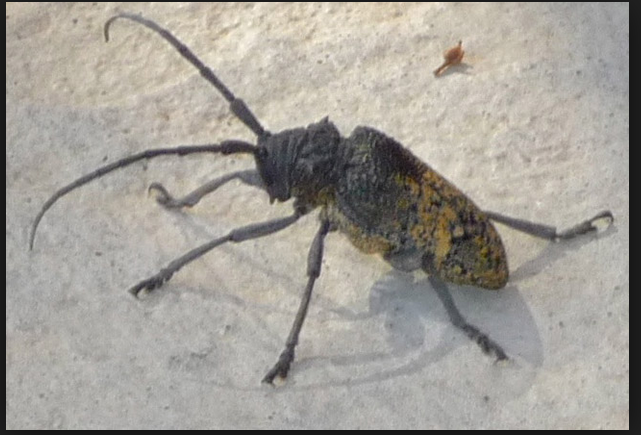 Here you will find numerous images of Longhorn beetles.

It is definitely a longhorn beetle (Cerambycidae), most probably from the subfamily Lamiinae (Flat-Faced Longhorns, > 10000 species worldwide). I'm however mostly familiar with longhorn beetles from northern Europe, and there might be taxa that I'm unaware of. The overall morphology (e.g. downward facing head, robust build, spined pronotum) is however very suggestive of Lamiinae.

The species suggested by @dustin also belongs to this subfamily and is probably correct, especially since it seems to be a common species where you find fig trees. This blog and Biodiversity Explorer - South Africa both label Phryneta spinatorthem as a pest species in Cape town and have nice pictures that are very similar to yours (also pics of larvae and larval galleries).

The sound you heard comes from stridulation of the scutellum against the back edge of the pronotum (similar to the sounds emitted by grasshoppers), and it is common in many longhorn beetles (especially from Lamiinae). It is believed to be a defence mechanism (they stridulate a lot when handled), but might also serve other purposes. Large species of longhorn beetles can have a painful bite, but they are not poisonous (I have at least never heard of a poisonous longhorn beetle) and not dangerous to your cats.