The damage of cancer cells

I read about the molecular biology of cancer, and I have a mess on my head and a lot of questions.. .

My primary question is-

The damage of the cancer cells is in the dna sequence or in the gene expression(microRNAs)? or even something else?

Cancer is commonly defined as uninhibited cellular replication caused by mutations to the genome.

Genes where cancer-causing mutations have been identified are known as oncogenes; the COSMIC (Catalogue Of Somatic Mutations In Cancer) database lists all of the known oncogenes (547 to date - 23rd Jan 2015 - 1% of all human genes!) [1].

What causes the mutations?

Lots of factors can cause mutations, from chemicals (e.g. from cigarette smoke, not just restricted to the lungs either [4]) to mistakes in the DNA replication machinery as somatic cells undergo normal cell division [5].

The last reference there provides very compelling evidence for the reason that some tissues are more predisposed to cancer than others; tissues with higher cell turnover (and thus require more cell division) have higher incidences of cancer - see the below figure from [5]! This figure separates "lung cancer" into two groups to show that even non-smokers have risk of developing lung cancer, but not as high a risk as those who smoke. 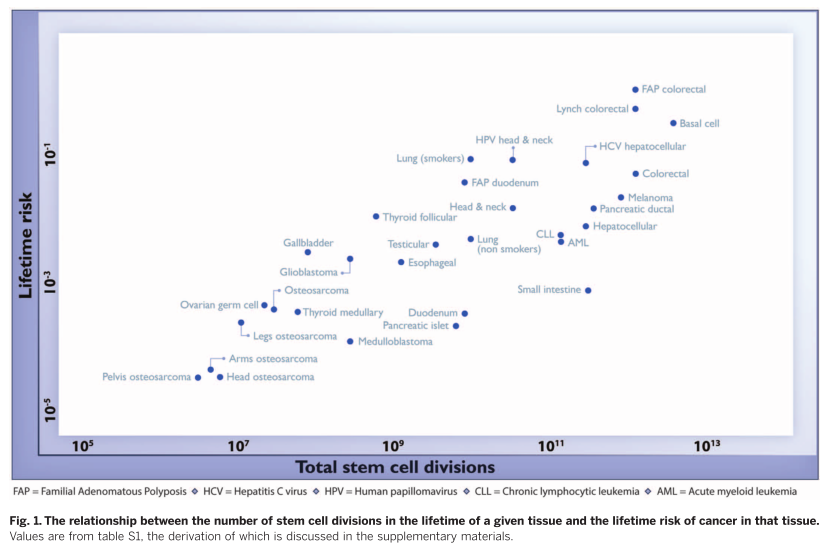 15
Looking for a cancer drug target database to guide sequencing of patient tumor DNA
2
Studying changes in DNA for causes of cancer
13
How fast do cancer cells divide (compared to normal cells)?
12
What are the differences between cancer and tumour?
3
Why does a tumour's genome change depending on the environment?
5
Questions on DNA damage
6
Telomerase as cancer target
2
RF Cautery DNA damage?
3
Does an increase in cancer cell traction forces increase metastasis of the cancer cells?
3
Cancer: computing the proliferation of DNA mutations in cancer cells