Why do the proportion of predators increase at mass extinction events? 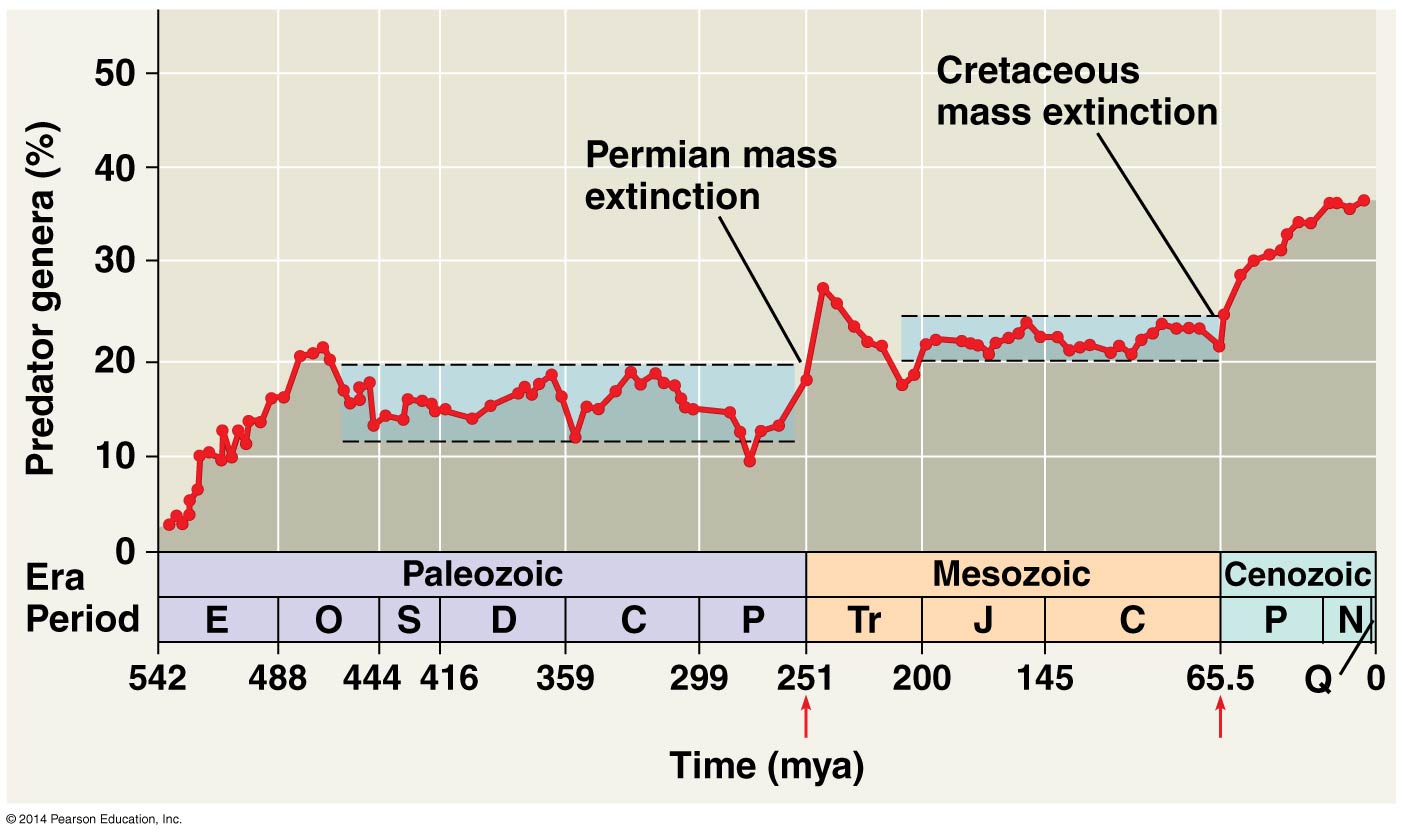 Why does predation surge with mass extinction? It is caused by extreme selective pressures over resource competition that forces certain species to adapt to predatory niches?

The data used in the graph you posted seems to be from Bambach. 2002. Supporting predators: changes in the global ecosystem inferred from changes in predator diversity (in Kowalewski & Kelley. The Fossil Record of Predation) - see fig 19b - and, if so, is specifically dealing with marine predators.

I don't have time to look at that paper closely (it is quite long), and paleoecology is not my field, but a couple of relevant sections are:

However, the diversity of predators and the proportion of total faunal diversity composed of predators have both increased over time, implying that ecosystems have increased their ability to support either more predators or more specialization among predators. Also, turnover in diversity dominance among predator groups, with more energetic predator taxa replacing or being added to a fauna of less energetic groups, implies that the energy available in marine food webs has increased.

If the efficiency of energy transfer between levels in the food pyramid has stayed nearly constant (and there is no evidence that it has not), then a reasonable hypothesis for the increased proportional diversity of predators is that either the biomass of prey species has increased or the populations of prey taxa have become more stable (or both), permitting greater specialization by predators on more reliable food supplies. Thus, predators could increase their proportional share of total diversity by specializing on fewer prey taxa.

So according to the author, energetics, energy flow and predator specialization seems like likely reasons for the change. However, the paper also discuss factors such as rates of fossilization and also the fact that predators are generally rarer than prey means that there is probably more stochasticity in the fossil occurence process, which could affect estimated turnover rates and maybe also the proportion between predator and prey. You'll have to look at the entire paper for a fuller picture, and maybe somebody more knowledgeable can fill in later. I also think that you need to look at radiation patterns in certain taxa to fully understand these stepwise changes, and also to consider oxygenetion events as possible underlying reasons, but these are just my speculations.

The reasons given above also in one sense echoes the "biotic" explanation for the latitudunal diversity gradient (see e.g. Gaston, 2000 and Mittelbach et al, 2007), where high levels of primary production can support more specialized predators/parasites in more complex food webs, then leading to higher species diversity. So there might be interesting connections to contemporary patterns and processes of biodiversity as well. However, I haven't seen a compilation of %predators over different biomes or latitudes to match the graph in the question. Also, the "biotic" explanation for the latitudunal diversity gradient has been criticized and is not without problems (see papers above for more).

Not the answer you're looking for? Browse other questions tagged evolution ecology palaeontology extinction predation or ask your own question.

4
Historical recovery from mass extinction events
9
Why and how does complexity usually tend to increase through time?
4
Confusion regarding niches in evolution theory
0
Advantages of gregarious vs solitary behaviour?
4
Evolution question on speciation? Really confusing!
2
Can two populations of the same species pollinate during different times?