How does Haloxyfop control young grassy weeds in fields of broadleaved crops?

Haloxyfop (haloxyfop-P-methyl) is a selective herbicide used to control grassy weeds in young stages. The mode of action (iirc) is basically inhibition of acetyl CoA carboxylase (ACCase). Why does this affect the monocots, while not harming the dicots? 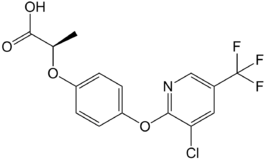 On the Botany department website of Purdue University (http://www.btny.purdue.edu/weedscience/moa/ACCase_Inhibitors/text.html) I found the following information on Acetyl-CoA carboxylase (ACCase) inhibitors:

[...] (ACCase inhibitors) inhibit the enzyme carboxyltransferase, an [...] Acetyl-CoAesterase which speeds the formation of malonyl-CoA from acetyl-CoA and CO2. Malonyl-CoA and acetyl-CoA are the building blocks of phospholipids and triacylglycerols [...] (that) combine to form lipid bilayers that serve as the cellular membranes. Affected plants cannot produce new cell membranes. This takes place in the grass’s meristematic tissue, which explains the mushy and disintegrated growing point. [...]

So to sum up, ACCase inhibitors act on eukaryotic ACCase, not the prokaryotic type. ACCase is essential for cell membrane formation. Blocking ACCase results in a depletion of its product, namely malonyl-CoA. Malonyl-CoA is essential for the synthesis of long fatty acids used in the cell membrane. Without cell membranes, cells lose integrity and turn to mush. Tissue growth is impossible without ACCase activity. Since monocots only have the eukaryotic ACC in both cytoplasm and chloroplasts, they die. Dicots, on the other hand, express prokaryotic ACC in their chloroplasts, making them resistant to ACCase inhibitors.

After some literature search I also found that blocking (knocking out) acetyl-CoA carboxylase in Arabidopsis (a dicotyledon) results in dead plant embryos and, hence, non-viable seeds (Baud et al., 2003).