What does it mean when a patient suffering from malignant tumor (cancer) has been declared cured?

Comment by Anongoodnurse, has made me curious as to what a doctor means when (s)he says "The cancer is cured" to a patient.

My idea up till this point (based on what I read and what I learned in my classes from my professors) was that the prognosis was declared based on the survival rates and that cancers could never be declared cured as no one could be sure that every single malignant cell has been eradicated.

Curable cancers are not few and far between.

Though the answer by Anongoodnurse has been accepted, I would like to have other answers too, please feel free to contribute

TL;DR - ask someone who has survived 45 years after treatment of their testicular cancer. The patient (and most doctors) would consider that a cure.

I believe the kxcd cartoon explains prognosis quite well. There is something that @Crags has overlooked, though, and that is the caveat "Once most cancers spread out into your body, they're incurable". 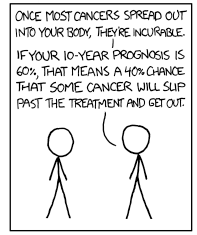 I would consider that sentence to be quite correct. A good prognosis is very different from a cure. Most of the surgeons, radiation therapists and oncologists I have worked with make that distinction. (Even surgeons, whose mottoes include "A chance to cut is a chance to cure." and "Nothing heals like cold hard steel." are careful not to use the word cure, unless it is a cure.)

I am not an oncologist, but oncologists do write papers. From one of them:

Although this study only followed patients for 100 months (8.3 years), some studies are much longer, and a cure is what you or I would think of as a cure: disease-free survival, not of months, but for a lifetime, that is, non-recurrence of the cancer.

Your professors sound like they are using the standard approach to cure, which is to hedge one's bets:

In medicine, a disease is considered cured when it’s been successfully treated and does not return. The concept of “cure” is difficult to apply to cancer because undetected cancer cells can sometimes remain in the body after treatment, causing the cancer to return later (referred to as a recurrence or relapse). Many cancers are considered “cured” when there is no cancer detected five years after diagnosis. However, recurrence after five years is still possible.

In the past, cure was defined as 5-years cancer free. We now know that that is survival, not cure. The same can be said of 10 years (thought that one runs more true to cure). The fact is, most studies don't follow patients indefinitely. That doesn't mean no cancer is "cured". The patients (even many of those in the xkcd comic) without recurrence are cured. Therefore it is a fallacy to say cancer can never be cured. Semantics and statistics are at play.

As I said in my comments, there are curable cancers.

Nearly every basal cell cancer can be cured, especially when the cancer is found early and treated.

These results suggest that a patient has a high likelihood of biochemical cure after treatment for prostate carcinoma with conventional doses of external beam RT if he has not demonstrated biochemical failure within 5 years of treatment. Patients with lower pretreatment PSA levels and lower Gleason scores may require longer follow-up than those with less favorable characteristics to achieve the same certainty of cure. Patients who achieve a PSA nadir ≤ 0.4 ng/mL and require ≥ 2.0 years to reach this nadir have the highest probability of cure.

Early cervical cancer can be cured by removing or destroying the precancerous or cancerous tissue.

Conclusion: Patients who survive 10 years appear to be cured of their disease, whereas approximately one third of actual 5-year survivors succumb to a cancer-related death. In well-selected patients, there is at least a one in six chance of cure after hepatectomy for CLM. The presence of poor prognostic factors does not preclude the possibility of long-term survival and cure.

Impressive improvements of survival rates in pediatric acute lymphoblastic leukemia (ALL) have been achieved during the last decades.1–21 Today, a long-term cure can be attained for approximately 75% of patients.

(Although good survival rates - defined by *event free survival - are defined at 6 years in this paper, there are papers which follow to 15 years with little change in the group. Like most studies, longer times mean more patients are "lost to follow-up".)

It goes on and on.

Finally, my comment was an admonition to you to be wise with your words, not an absolute.

12
What are the differences between cancer and tumour?

4
Detecting cancer or a genetic predisposition based on DNA sequencing
0
What does "radiographic progression" mean in cancer?
0
Cancer: what does it mean "at presentation"?